Over the past few months, my Congressional District Breakdown tables estimating how many people would likely lose healthcare coverage if the ACA were to be "cleanly" repealed (with no replacement) have gotten a lot of attention. This was followed by the Center for American Progress (CAP) running their own estimates of how many would likely lose coverage if, instead of a "clean" repeal of the ACA as a whole, the ACA were to be partially left in place, with the GOP's AHCA (Trumpcare) bill, which dramatically changes the ACA, being signed into law instead.

Georgia: Here's the ~377,000 residents who could lose coverage, by county

In the case of Georgia, assuming 567,000 people enroll in exchange policies by the end of January, I estimate around 396,000 of them would be forced off of their policy upon an immediate-effect full ACA repeal.

UnitedHealth Group Inc., the biggest U.S. health insurer, is scaling back its experiment in Obamacare markets as its Harken Health Insurance Co. startup withdraws from the two exchanges where it was selling plans.

As commenter ME notes, there are currently around 22,800 Harken enrollees in Illinois and another 10,500 in Georgia. I have no idea what the on/off exchange ratio is, however, so the number of people who will actually have to shop around will be up to 33,300; assuming, say, 2/3 are on the exchange, that would be roughly 22,000 people.

About a month ago, when I first plugged in the average requested 2017 rate hikes for Georgia's ACA-compliant independent market, I came up with an overall weighted average of around 27.7%. However, there was one major gap in the data: I had trouble finding Ambetter/Peach State's enrollment numbers or even their average rate hike request, so I reluctantly left them out of the calculation completely.

When Aetna announced that they were dropping out of the Georgia exchange-based independent market, I went back and removed them from the mix. Since Aetna's request had been 15.5% on a substantial share of the market, this meant that the rest of the statewide average shot up to 32.0%.

Today I was able to track down the missing Ambetter/Peach State data--both the average requested rate hike (around 8.0%) as well as the number of current enrollees impacted...around 73,000:

IMPORTANT: This is really just a placeholder for Georgia's 2017 average rate hike requests, because it's extremely spotty and partial so far. I'll update it once I'm able to actually track down the bulk of Georgia's individual market enrollment and rate hike request numbers.

UnitedHealthcare drops off exchange in at least 5 states...but also admits they ARE making money in some places

Over the past week or so, UnitedHealthcare started making good on their threat last fall to drop out of the ACA exchanges in at least some of the 33 states that they offer individual market policies in. On April 8th they said they were pulling up stakes in Arkansas and Georgia (although they're keeping a small presence in Atlanta via their experimental "Harken Health" division). Then, last Friday, they said they were dropping off the Michigan exchange as well...and just today, Adam Cancryn noted that they're pulling the plug on Oklahoma, while Zachary Tracer says they're pulling out of Louisiana. Ugh.

Thanks to Sabrina Corlette for the heads up:

The Minnetonka, Minn.-based insurer offered plans this year for the first time, but it didn't submit plans to the department for 2017, department spokesman Ryan James said.

The deadline for insurers to submit such plans was April 1, he said.

This is hardly unexpected news for a couple of reasons. First, UHC made huge waves last November by making a big, dramatic announcement that they might very well drop out of the ACA exchanges altogether next year after taking large losses on exchange enrollees in 2015. As you may recall, this was a very oddly-timed announcement given that they had issued a glowing quarterly report just a month earlier which made it sound like everything was hunky-dory.

Georgia: *Approved* 2016 Rate Hikes may be slightly lower than requested (?)

When I ran the numbers for Georgia's individual market in August, I didn't have a whole lot to work with. The requested rate changes were only publicly available for carriers representing around 222,000 enrollees, out of a state-wide individual market of (likely) around 750,000. The weighted average increase for the companies I had data for was around 18.3%; all I knew about the rest of them is that they had asked for hikes of under 10%. My best ballpark estimate was that Georgia residents were likely looking at roughly a 10-13% increase overall.

Today I ran across an article in the Rome News-Tribune which gives some of the final, approved rate hike numbers for 2016...but just bits and pieces, nothing to hang your hat on:

Many Georgians buying individual or family health insurance will see double-digit increases in their premiums for 2016. 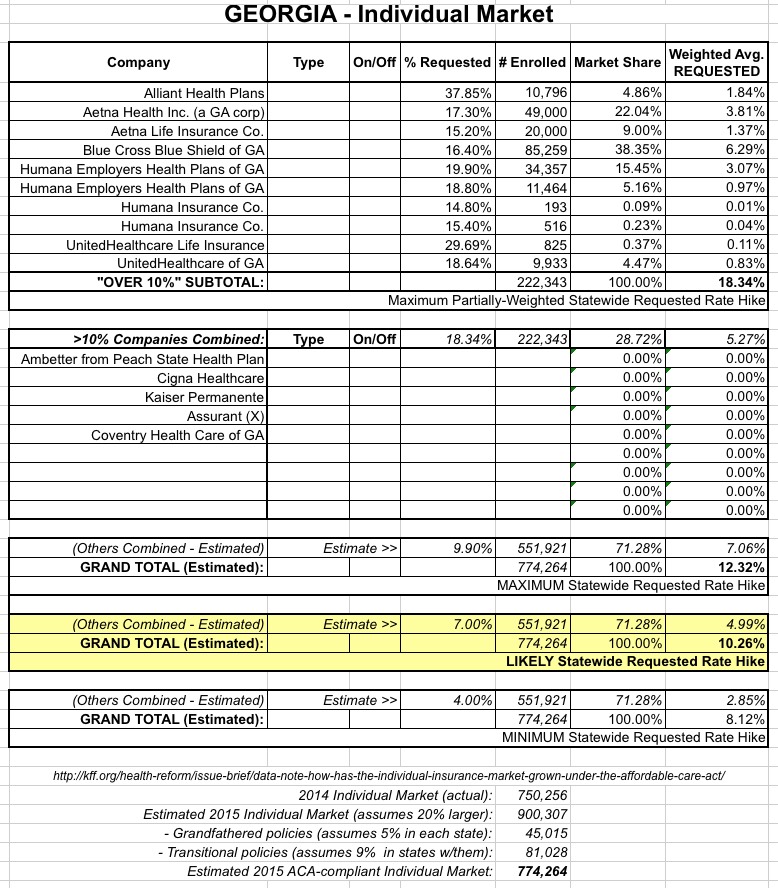