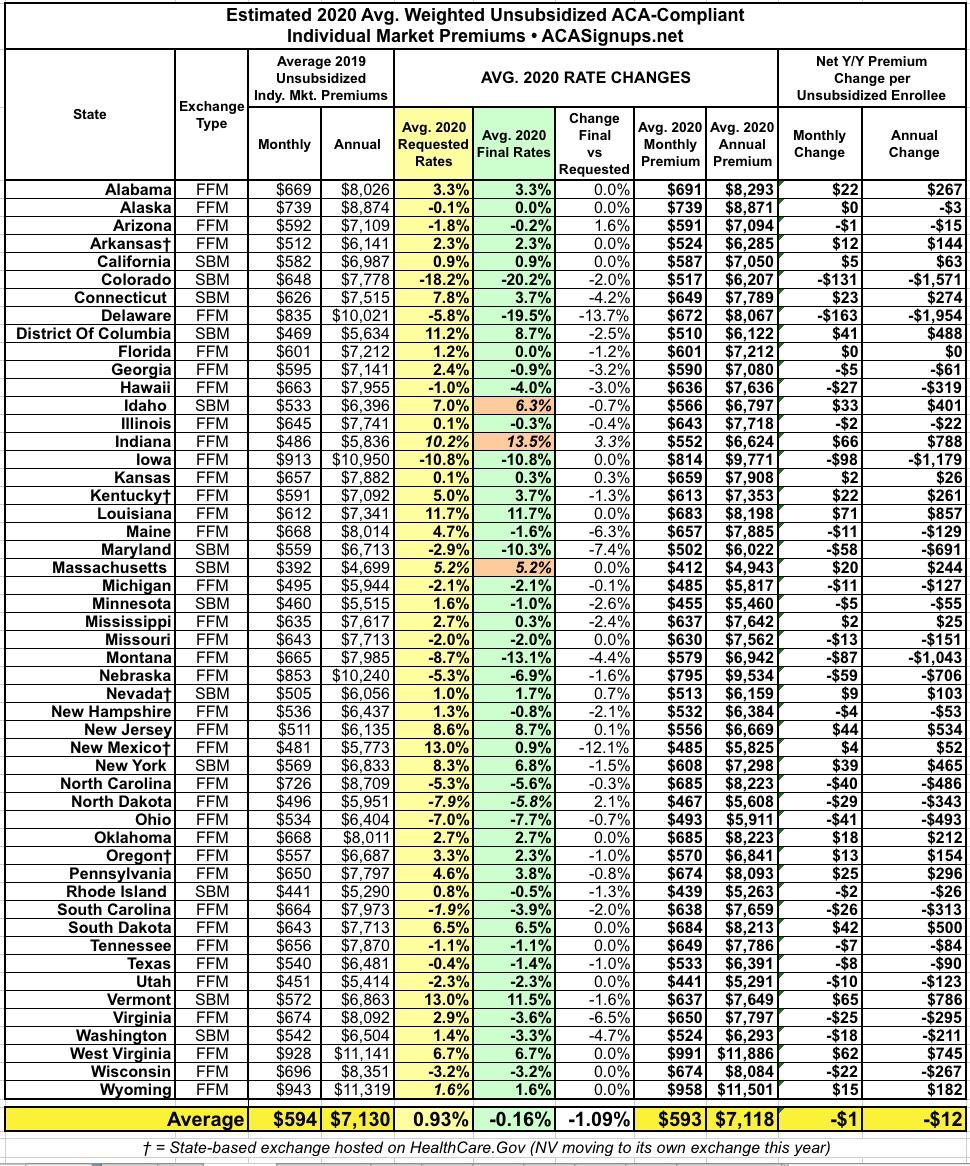 Mississippi once again has two carriers offering ACA-compliant individual market coverage in 2021 and six on the small group market. Unfortunately, few filing forms don't seem to be available and the ones which are are redacted, so I can't run weighted averages for either.

The unweighted average rate increases are 2.7% on the individual market and basically flat for small group plans.

When are carriers in YOUR state supposed to submit their 2021 ACA premium rate changes?

So far, only 8 states (+DC) have released their preliminary 2020 ACA-compliant individual market premium rate filings. So what's the deal with the other 42 states? Well, here's a handy 2020 Submission Deadline table from SERFF (the System for Electronic Rates & Forms Filing, a database maintained by the National Association of Insurance Commissioners).

However, it's a bit overly cumbersome: It stretches out over 5 full pages, and includes columns for Standalone Dental Plans as well as a bunch of info regarding the Small Group Market.

To that end, I've cleaned up/simplified the 2021 Submission Deadline table considerably to only include the individual and small group market dates. I'll be perfectly honest: I'm not quite sure what the distinction is between the "Form/Rate Filings" and the "Binder Deadlines", but the dates tend to match up pretty closely, so I've included all of them below.

There are three insurance carriers offering ACA-compliant individual market plans in West Virginia: CareSource, Highmark BCBS and Optum, although Optum has barely any enrollees at all, and the other two combined only total around 26,000 people in the state.

The final, approved average unsubsdized premiums for 2020 haven't changed from the requested rates--the weighted statewide average is a 6.7% increase.

Nothing terribly noteworthy about any of this, except that with that 6.7% increase, West Virginia has just taken the title for Most Expensive Obamacare Premiums in the Country, with average premiums averaging $990/month per enrollee, or nearly $12,000/year apiece.

This record was held by Wyoming last year (prior to that I believe Alaska had by far the highest rates in the country, until they instituted their ACA reinsurance waiver a few years back, which reduced full-price premiums by a good 25% or so).

Back in mid-August, I plugged in the preliminary 2020 individual market rate change requests for unsubsidized enrollees in Texas. Unfortunately, at the time I only had hard enrollment data for some of the carriers, which meant I could only run a "semi-weighted" statewide average, which came in at +0.8%.

Since then, I've managed to find the enrollment data for the rest of the carriers as well...and yesterday CMS posted the final, approved 2020 rate changes, allowing me to run the complete, final, fully-weighted average. In the end rates in Texas are dropping by 1.4%:

Mississippi once again has two carriers offering ACA-compliant individual market coverage in 2020: Ambetter of Magnolia, which holds 58% of the market, and Blue Cross Blue Shield with the other 42%. Earlier this year they were asking for average rate hikes of 3.0% and 2.3% respectively, but Ambetter's final/approved rates are coming in at a 1.1% reduction, bringing the overall average down to a mere 0.3% rate hike.

Not much to this one: Wyoming has just a single carrier selling ACA-compliant individual market policies to their 577,000 residents, Blue Cross Blue Shield...which is raising rates 1.6% on average for 2020. No change from their requested increase a few months earlier.

Back in early August, it looked like New Hampshire's avg. unsubsidized 2020 ACA premiums would be increasing slightly, by a little over 1% statewide.

Missouri's final/approved avg. 2020 unsubsidized premium rate changes have finally been posted by CMS. For the most part they're following the same pattern as most other states this year with modest increases or decreases and a statewide weighted average decrease of 2.0% year over year. On average, unsubsidized ACA enrollees should pay about $13/month less next year than they are today.