In other words, I've had a pretty good track record of accurately projecting average premium increases for the upcoming year for five years in a row. With that in mind, below you'll find a table tracking the state-by-state preliminary and final rate changes for the 2021 ACA-compliant individual (and sometimes small group) markets. Scroll down for individual state entry links.

For 2021, the biggest new factor is, of course, the impact of the COVID-19 pandemic on both 2020 and 2021 medical claims expenses. I've added a new column which attempts to separate that out, though not every carrier does so, while some simply refer to the impact of COVID-19 in a fairly vague way. 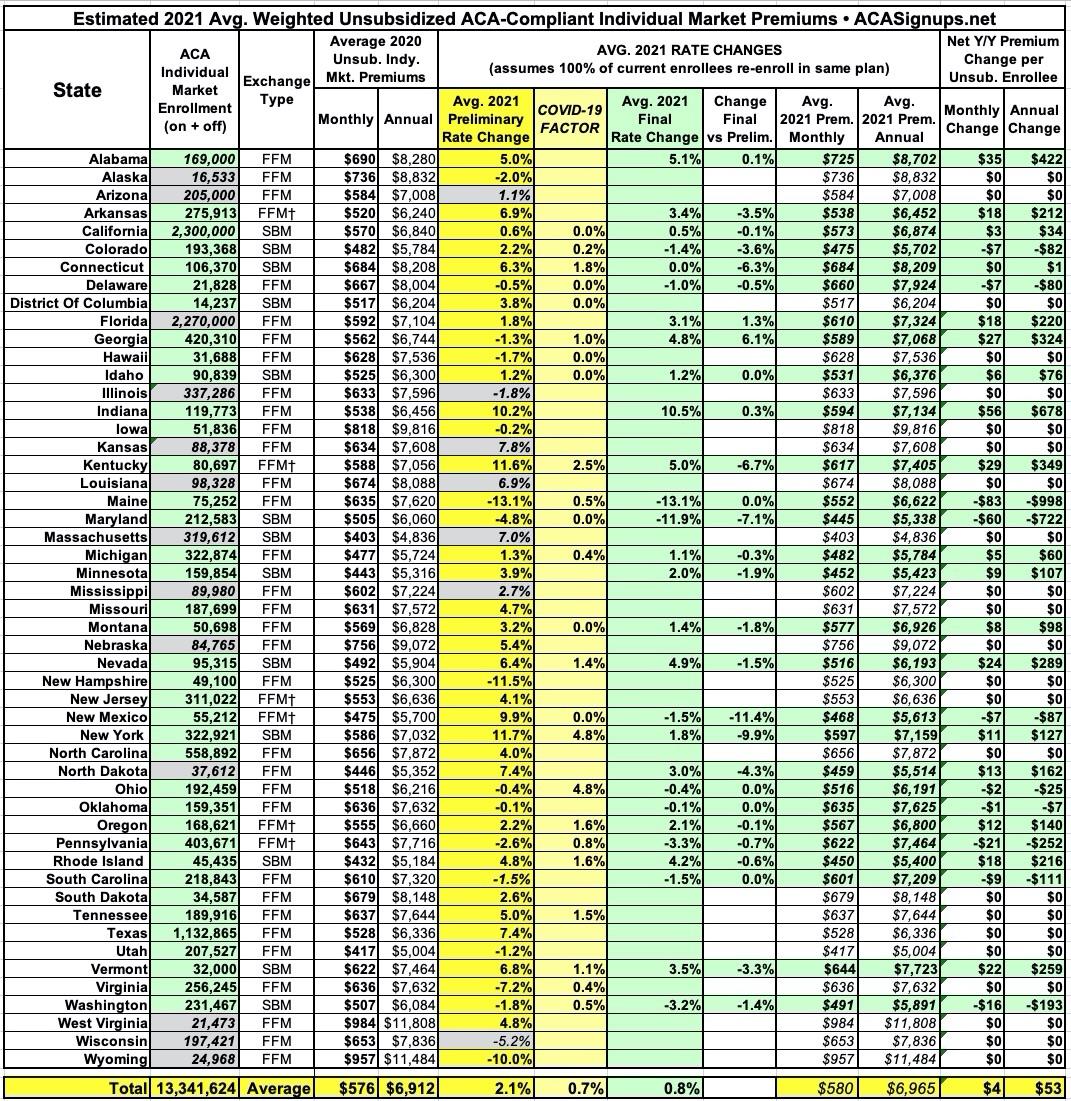 So how'd I do on the average ACA premium rate changes this year?

Every year, I spend months painstakingly tracking every insurance carrier rate filing for the following year to determine just how much average insurance policy premiums on the individual market are projected to increase or decrease, and over the years I have a pretty good track record of nailing the average unsubsidized premium changes in each state.

However, it's never going to be dead on target, for a number of reasons: Rounding errors in the rate filings, missing enrollment data, outdated enrollment data, last-minute filing changes and so forth. In some states I'm only able to find on-exchange enrollments and have to estimate the corresponding off-exchange number for each carrier; in some cases the percent changes being approved don't match from the official Uniform Rate Review Template (URRT) form to the Actuarial Filing Memo, and sometimes neither of them match up with what shows up at RateReview.HealthCare.Gov!

OK, right after saying I was putting a lid on my 2021 Rate Change project, I'm slipping in one more: The District of Columbia posted their approved rate changes a few weeks back:

Way back in July (a lifetime ago!), Michigan's Dept. of Financial Services posted the state's preliminary 2021 individual & small group rate filings. At the time, the average premium changes being asked for were around a 1.3% increase on the individual market and 1.4% on the small group market.

Last week, a few days ahead of the launch of the 2021 Open Enrollment Period, they posted the approved 2021 rates...and there's almost no changes at all. The only significant change was to Meridian's request, which was dropped from a 2.7% increase to a 5.6% decrease. Also, National Health Insurance dropped out of the Small Group market, but they don't appear to have anyone enrolled this year anyway:

A couple of weeks ago I posted North Dakota's preliminary 2021 individual & small group policy premium rate filings, which averaged a 7.4% increase on the individual market and a 4.1% unweighted average increase for the small group market.

A few days ago, the North Dakota Insurance Dept. posted the final/approved rate hikes, including several significant reductions over those requested:

Back in early August, the Pennsylvania Insurance Dept. issued the preliminary rate filings for PA's individual and small group market carriers. At the time, the weighted average rate change being requested on the individual market came to a 2.6% reduction in unsubsidized premiums, while the average small group plan was set to increase by 2.3%.

Last week, the PA DOI issued their final decisions for the long list of carriers on each market, and the changes were...minimal, really. In fact, there was no change at all made to most requested rate filings--only two of the 17 indy market carriers saw a change (reductions for each), and only four of the 21 small group carriers did...and even then, the changes aren't terribly dramatic, just a few percentage points in most cases.

Back in late July, the Rhode Island insurance dept. issued a press release with the preliminary 2021 rate filings for the state's individual and small group markets. At the time, the weighted statewide average increases being requested were around +5.0% and +2.2% respectively.

A month later, the RI DOI issued their approved 2021 rate decisions, and made some small tweaks to each. In fact, it looks like there was at least one revision in between, as the new press release lists slightly different numbers for the "preliminary" requests.

In any event, Rhode Island indy & sm. group enrollees will be looking at roughly 4.2% increases on the individual market and 2.6% increases for small group plans:

Way back in June, the Washington Insurance Dept. posted the state's preliminary 2021 preliminary individual & small group market premium rate filings. At the time, the weighted average across all carriers was a 1.8% drop in individual market premiums and a 3.4% increase in small group rates. They also announced the addition of two new carriers to the individual market: Community Health Network and UnitedHealthcare of Oregon. It's important to note that both of these new carriers will only be providing WA's new (quasi) Public Option plans.

Last month, however, the WA DOI announced the approved 2021 rates...for the individual market only, and even then it's missing two carriers which are still under review (Asuris and Health Alliance NW). The missing carriers only have 1,200 enrollees between them, however, so any changes to their requested rates won't move the needle noticeably:

Back in late August, the Florida Office of Insurance Regulation posted preliminary 2021 individual & small group market rate filings. At the time, the weighted average increases were around 1.8% on the individual market and 3.3% for small group plans. Unfortunately, the actual enrollment data for each carrier is protected as a trade secret in Florida, but the FLOIR did post those weighted statewide averages.

Last month (I'm a bit behind) they posted the approved, final rate filings. The average individual market increases actually went up a bit, which is unusual (usually they're whittled down a few points), while the small group market average is exactly the same (oddly, they had it as 3.3% in August but say that the preliminary average was 3.4% now):