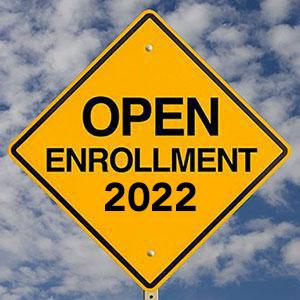 Monday, November 1st was the start of the official 2022 #ACA Open Enrollment Period (OEP) for anyone who needs quality, affordable healthcare coverage. The 2022 OEP is by far the best ever for the ACA coverage, with dramatically expanded financial help for millions more people (including many who weren't eligible last year), reinvigorated expert, unbiased assistance, more choices in many states and counties, and FREE policies for more people than ever before.

If you've never enrolled in an ACA healthcare policy before, or if you looked into it years ago but weren't impressed, please give it another shot now. Thanks to the American Rescue Plan (ARP), it's a whole different ballgame.

Here's some important things to know when you #GetCovered for 2022:

1. RESIDENTS OF MOST STATES HAVE MORE TIME, BUT YOU STILL SHOULDN'T DELAY!

While the official Open Enrollment launch date has been November 1st for years, the deadline to enroll for 2022 coverage is a full month later in most states, especially the 33 states which utilize the federal ACA exchange at HealthCare.Gov.

Most people still had to enroll no later than December 15, 2021 in order to have their coverage start on January 1st, 2022...but if you enroll between December 16th and January 15, your coverage will start on February 1st.

As usual, some of the states which operate their own ACA exchanges have final enrollment deadlines even later than that. Here's a summary of the deadlines to sign up for 2022 ACA healthcare coverage, and when it starts: 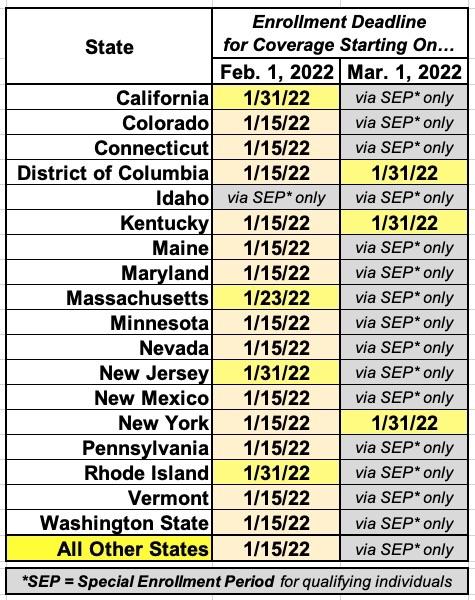 UPDATE 12/14/21: Access Health CT (the Connecticut exchange) just announced that they're extending their 12/15 enrollment deadline for January 2022 coverage through 12/31/21.

If you want to enroll outside of the dates above, you'll have to qualify for a Special Enrollment Period (SEP). Qualifying Life Experiences (QLEs) which make you eligible for a SEP include things like:

If you're a member of a federally-recognized Native American tribe or are an Alaskan Native you can enroll in an ACA exchange plan year-round regardless of what state you live in.

2. ONLY ENROLL VIA AN OFFICIAL ACA HEALTH EXCHANGE OR AN AUTHORIZED ENROLLMENT PARTNER.

ACA financial subsidies have been dramatically expanded for 2022 thanks to the American Rescue Plan...but they're only availalble to eligible enrollees who sign up through an official ACA exchange or an authorized 3rd-party exchange entity, known as an Enhanced Direct Enrollment (EDE) entity.

Note: While you could also enroll in ACA-compliant policies directly via the insurace carrier's website I STRONGLY recommend only using one of the exchange websites listed above. You have to enroll on-exchange to be eligible for financial help!

If you live in Kentucky, Maine or New Mexico, it's important to note that all three states have moved onto their own ACA exchange platforms for the 2022 Open Enrollment Period! Kentucky is an unusual case, in that it moved from its own exchange to HealthCare.Gov and now back onto its own exchange platform again (Nevada is the only other state to have done this so far).

On a related note...

3. IF YOU'RE ENROLLED OFF-EXCHANGE, IF AT ALL POSSIBLE SEE IF YOU CAN ENROLL ON-EXCHANGE INSTEAD.

As far as I can figure, somewhere between 2.3 - 3.0 million Americans are still enrolled in OFF-exchange, ACA-compliant individual market policies. Historically, the main reason for this has been that they didn't qualify for financial help, so didn't see the point of filling out any additional forms by enrolling on-exchange.

The reality, however, is that some of these off-exchange enrollees may have been eligible for ACA subsidies after all if they had enrolled in the exact same plan but had done so via their ACA exchange instead of directly through the carrier...and thanks to the American Rescue Plan's dramatically improved & expanded subsidy formula, the odds are that as many as half or more of those 2.3 - 3.0 million people will be leaving hundreds or thousands of dollars on the table if they don't make the switch!

Again: If you weren't eligible a few years ago or even last year, check again this year; you may be in for a very pleasant surprise!

Having said that, if it turns out you really don't qualify for subsidies even with the ARP's expanded eligibility, you can take at least some comfort in knowing that ACA policy premiums have remained remarkably stable over the past few years, even as the COVID pandemic raged across the country.

On average, full-price/unsubsidized ACA premiums were essentially flat in 2020 nationally and again in 2021, while in 2022 it looks like they're only going up around 3.5% overall.

4. MILLIONS OF AMERICANS WHO DIDN'T QUALIFY FOR FINANCIAL HELP LAST YEAR DO NOW...AND THEY COULD SAVE THOUSANDS OF DOLLARS!

Before I get into this, it's important to understand what the Federal Poverty Line (or FPL) is. 100% FPL depends on how many people live in your houseold. For a single adult with no dependents, it's around $12,900/year; for a family of four, it's around $26,500/year. These amounts increase slightly each year to account for inflation.

Prior to the American Rescue Plan, ACA subsidies were limited (on a sliding income scale) to enrollees earning between 100 - 400% FPL (up to around $51,000/year for one person, or $106,000/year for a family of four. If you earned more than 400% FPL, however, you had to pay full price no matter how expensive the premiums were.

With the passage and signing of the ARP, the ACA's infamous "Subsidy Cliff" has been killed at last (through at least the end of 2022, anyway; after that it depends on the fate of the Build Back Better bill). 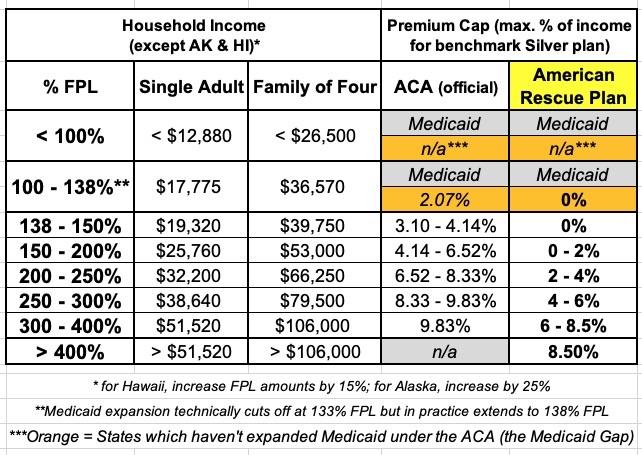 You can also read my more detailed explainer, including a bunch of case studies for comparison. For example:

5. TEN STATES ARE OFFERING *ADDITIONAL* SAVINGS *ON TOP OF* THE EXPANDED ARP SUBSIDIES!

In addition, several states have special programs and/or additional savings on top of the enhanced federal subsidies which can save many lower-income enrollees even more!

That's only $12/year, of course, but even a nominal fee can make a difference to low-income enrollees who'd otherwise have to pay an invoice each month; the fact that it'd only be $1 doesn't change the hassle factor.

6. MILLIONS OF PEOPLE ARE ELIGIBLE FOR FREE "SECRET PLATINUM" PLANS (LABELED AS SILVER)!

As I explain in detail here, if your household earns less than 200% FPL (around $25,500/yr if you're single; around $52,000/yr for a family of four), make sure to choose a SILVER plan! Thanks to the ACA's Cost Sharing Reductions (CSR) system, you'll receive additional financial help which will lower your deductible, co-pays and coinsurance so much it effectively transforms Silver plans into Platinum plans!

Furthermore, thanks to the American Rescue Plan, the premiums for these "Secret Platinum" plans are literally nothing for anyone earning under 150% FPL and max out at just 2% of your annual income from 150 - 200% FPL! (As noted above, in a few states you may not have to pay a dime in premiums for a Silver plan even if your income is over 150% FPL).

As I explained here, due to a long, strange series of events, subsidized enrollees earning 200% FPL or more may end up getting a Gold plan for less than Silver, or a Bronze plan for free!).

In fact, for 2022, David Anderson has run an analysis and finds that there are 820 counties where at least one Gold plan is priced lower than the benchmark Silver plan even at full price! Once you add Silver Loading into the mix, this means many people will qualify for a ZERO-PREMIUM GOLD plan even if they earn over 200% FPL!

8. THE INDIVIDUAL MANDATE IS STILL AROUND IN FIVE STATES!

The single most controversial part of the Patient Protection & Affordable Care Act was the Shared Responsibility Provision, commonly known as the "Individual Mandate Penalty." In essence, all American citizens who didn't qualify for an exemption were required to either have ACA-compliant healthcare coverage (this could include Medicare, Medicaid, CHIP, qualifying Employer-Sponsored healthcare policies, or ACA exchange plans) or they would be charged a financial penalty for not having qualifying coverage.

The federal ACA individual mandate was reduced to nothing in 2017, so it isn't an issue any longer...but there are actually five states which have since reinstituted their own healthcare coverage requirement:

In CA, DC, NJ & RI, the penalty either identical or very close to the old federal penalty. Massachusetts uses their own formula. The financial penalty for not having coverage (assuming you don't qualify for an exemption) will be charged when residents file their 2022 state taxes in spring 2023. 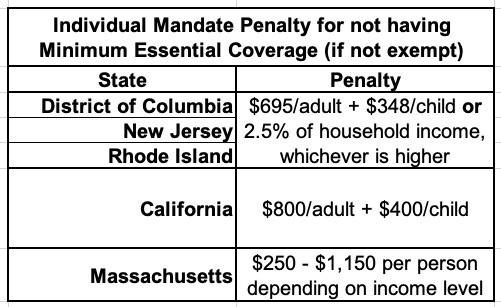 9. MANY STATES & COUNTIES WILL HAVE MORE CARRIER & PLAN CHOICES THAN EVER.

Arizona is welcoming three new carriers to the state's individual market in 2022. North Carolina is adding five. Pennsylvania is adding one. Across many states, some insurance carriers which abandoned the ACA markets years ago like Aetna are jumping back in again, or expanding into either new states or additional counties in states where they're already operating.

According to the Kaiser Family Foundation, 32 additional carriers are joining the 33 HealthCare.Gov states alone for a total of 213, and HC.gov enrollees will have nearly twice as many total plans to choose from on average as they did in 2021.

Of course, while more choice is normally a good thing, in this case it can also get so confusing that it becomes overwhelming. Fortunately...

10. THE NAVIGATOR PROGRAM IS BACK AT FULL STRENGTH, BABY!

Four years ago, the Trump Administration effectively gutted both the ACA's marketing/outreach budget (slashing it down by 90%) as well as its "Navigator" program, causing dozens of organizations around the country devoted to helping ACA enrollees find their way through the confusing world of health insurance enrollment (as well as those needing guidance to get into Medicaid, CHIP and other healthcare programs).

Thankfully, those days are no more: The Biden Administration has reversed this damage, quadrupling the number of ACA Navigators to over 1,500 and increasing the grant program to $80 million this year.

The news is even better for underserved communities...those who need help the most:

To find authorized local help, search here. If you live in a state with its own ACA exchange you'll be redirected there.

11. FOR THE LOVE OF GOD, WHATEVER YOU DO, *DON'T* LET YOURSELF BE PASSIVELY AUTORENEWED!

It's always been a good idea to actively shop around the ACA marketplace each Open Enrollment Period to see whether there's a better value for the upcoming year, but the 2022 OEP takes this to a whole other level.

Between the massively expanded & enhanced subsidies thanks to the ARP, the dramatic increase in carrier participation in many states, the supplemental financial assistance being provided to many enrollees in nearly a dozen states, the seemingly counterintuitive pricing structure caused by "Silver Loading" and a host of other factors, you should absolutely NOT let yourself be "auto-renewed" this year!

My friend & colleague Louise Norris lists some important reasons for this:

Note that this doesn't necessarily mean that you shouldn't actively renew your existing plan--it may turn out that sticking with the same healthcare policy really is your best bet after all. Just don't assume that's the case, because even if nothing changes at your end (same income, same household size, etc.), the plans, premiums, networks and especially the subsidies you're eligible for could still change dramatically.