REMINDER: Six* States will have their own Individual Coverage Mandate Requirement in 2020! 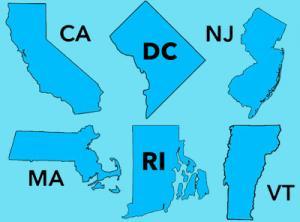 *(Yes, I know, the District of Columbia isn't actually a state, and Vermont's mandate is...well, read on...)

As the 2020 Open Enrollment Period rapidly approaches (it starts November 1st nationwide...except for California, where open enrollment is starting on October 15th), it's time to start getting the word out about some important things to keep in mind this fall.

One of the most critical things to remember for residents of California, the District of Columbia, Massachusetts, New Jersey, Rhode Island and Vermont is that each of these states* has reinstated an individual healthcare coverage mandate law/ordinance to replace the federal ACA mandate penalty which was zeroed out by Congressional Republicans back in December 2017. This means that if you live one one of them, unless you receive an affordability, hardship or other type of acceptable exemption, you'll be charged a financial penalty when you file your state/district taxes for 2020 in spring 2021 if you don't have qualifying healthcare coverage.

In most cases, the penalty is structured to mirror the just-nullified federal penalty, but in Massachusetts they simply reverted to their pre-ACA penalty (which is structured differently), and in Vermont...well, there isn't any actual financial or other penalty to speak of yet, to my knowedge:

It is the intent of the General Assembly that the individual mandate to maintain minimum essential coverage established by this act should be enforced by means of a financial penalty or other enforcement mechanism and that the enforcement mechanism or mechanisms should be enacted during the 2019 legislative session in order to provide notice of the penalty to all Vermont residents prior to the open enrollment period for coverage for the 2020 plan year.

...There is created the Individual Mandate Working Group to develop recommendations regarding administration and enforcement of the individual mandate to maintain minimum essential coverage.

In other words, they created a "working group" to figure out what the actual penalty for noncompliance should be...but to the best of my knowledge, the working group still hasn't actually gotten around to saying what the penalty will be. Until then, I guess Vermont residents are just on the honor system.

Ironically, this is pretty much the same situation that the federal government currently finds itself in. Remember, Congressional Republicans and Donald Trump didn't eliminate the ACA's coverage requirement, they just "zeroed out" the financial penalty for doing so. Technically speaking, there is still a tax penalty...it's just that the penalty is $0.00 or 0.0% of your income.

Even more ironically, the above sentence is precisely what gave the GOP Attorneys General the incredibly thin excuse they needed to file the #TexasFoldEm lawsuit in the first place...which, if successful, would result in the entire ACA being struck down.