Ohio: Here's the ~865,000 residents who could lose coverage, by county

Assuming 265,000 people enroll in exchange policies by the end of January, I estimate around 175,000 of them would be forced off of their private policy upon an immediate-effect full ACA repeal, plus another 692,000 enrolled in the ACA Medicaid expansion program, for a total of over 865,000 Ohioans kicked to the curb.

(sigh) Once upon a time, there were 24 ACA-created Co-Ops. Then, after one of them failed to even make it through the 2nd open enrollment period, a variety of factors (culminating in the infamous Risk Corridor Massacre) caused another dozen or so to curl up & die, falling like dominoes throughout last September/October.

When the dust settled, there were 11 Co-Ops left standing, but most of them were still on pretty shaky ground, with all but a handful placed under "enhanced oversight" by their states (and I have to admit that the term sounds an awful lot like a euphamism, a la "enhanced interrogation technique").

Thanks to Richard Simpkins for bringing this to my attention.

A week or so ago, Akash Chougule, Director of Policy at Americans for Prosperity (you know, the Tea Party political outfit funded by the Koch Brothers), posted an Op-Ed piece at Forbes tearing apart Ohio Governor John Kasich's decision to expand Medicaid via the Affordable Care Act. From a Republican POV, of course, Kasich agreeing to accept ACA Medicaid expansion is blasphemous. The piece was posted just ahead of the Ohio Republican Presidential primary, so naturally it was intended to hurt his chances of winning his home state (it didn't work, of course; Kasich did indeed win Ohio, keeping his campaign alive awhile longer, if just barely).

Anyway, here's the part which made both Simpkins and myself scratch our heads:

Ohio Governor John Kasich has spent no small amount of time on the presidential campaign trail discussing his decision to expand Medicaid to 650,000 able-bodied adults under Obamacare. But policymakers in non-expansion states should take a closer look at what’s actually unfolded in Ohio before considering going down the same path.

FOLLOW-UP: Fifteen questions Hillary Clinton would have had to ask Ms. O'Donnell to address her situation

I originally intended this to be an update to yesterday's post about the woman at the Ohio Democratic Town Hall in which a woman asked Hillary Clinton why her family's insurance rates have gone up from $490/month to $1,081/month since the Affordable Care Act was passed. However, that post had already gotten absurdly long and unwieldy, so I've split it off into a new entry.

In the comments yesterday, a man named Danny Robins posted the following. I've broken it up a bit for readability, and have included my responses; both his points and my responses lend some additional insight into both Ms. O'Donnell's dilemma as well as my own point about Clinton's response:

My Columbus Ohio based health insurance practice for the past 7 years has been focused on helping small employers offer more affordable health benefits outside of the employer sponsored health insurance market. It has been widely reported that up to 70% of small employers no longer sponsor a health plan because they can not afford it. As such, I have assisted with over 2,000 people obtain individual or family health coverage.

Some of the ACA provisions have been a huge success, such as the Medicaid expansion program, which has added over 14 million people to the program over the past 3 years. Others can be viewed as being successful or so-so depending on your POV, like the 12.7 million people who have enrolled in private policies via the ACA exchanges.

And then there are the portions of the law which have gone, well, not so great, to put it mildly...in particular the non-profit, public/private hybrid Co-Ops, which are the only remaining remnant of the originally much-hoped-for "Public Option". For a variety of reasons, not the least of which was an utterly unnecessary and ultimately pointless stunt pulled by Marco Rubio and other Congressional Republicans (aka the Risk Corridor Massacre), over half of the two dozen Co-Ops nationwide melted down in spectacular fashion last fall, leaving only 11 of them surviving into 2016 after the dust settled.

In light of this, I figured it would be worth posting some positive Co-Op news for a change. First up, Ohio.

As explained in the first link above, I've still been able to piece together rough estimates of the maximum possible and mid-range requested average rate increase for the Ohio individual market: 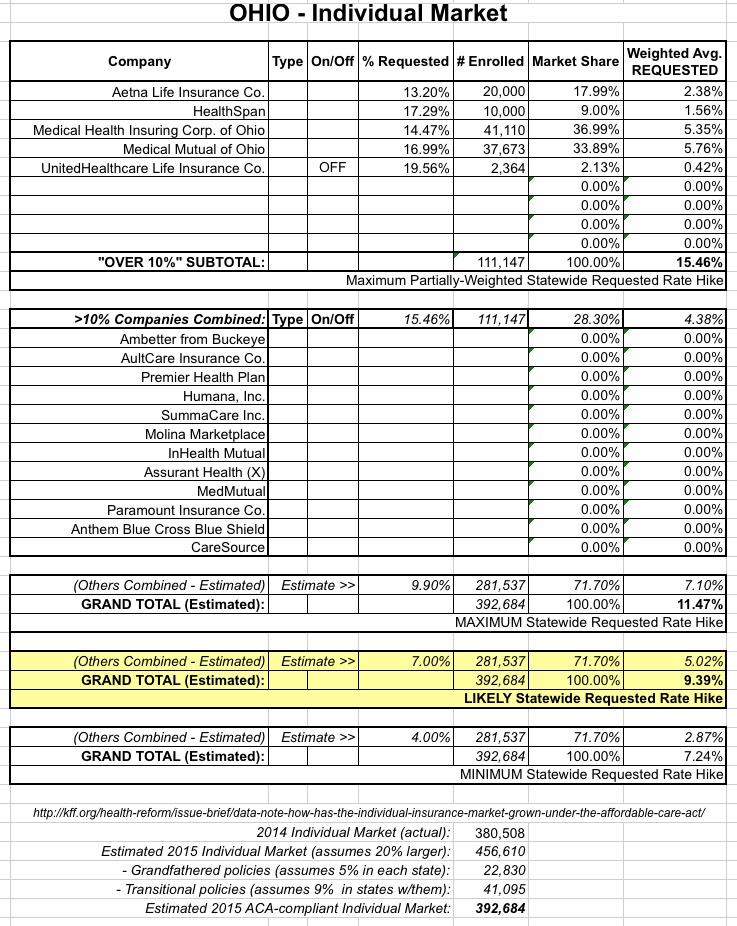 Again, the full explanation is included here, but to the best of my knowledge, it looks like the companies with rate increases higher than 10% come in at a weighted 15.5% increase, but only make up about 28% of the total ACA-compliant individual market, with several other companies with requested increases of less than 10% (decreases in some cases) making up the other 72%.