That leaves about 34K enrolled in off-exchange Aetna policies. Between that and the approved rate hikes, the final average for South Carolina comes in at 25.6% vs. the 17.3% requested.

​The WA insurance department had previously issued two press releases, each of which included partial approved rate hike data for 2017...but both of them left out some crucial pieces of the puzzle, so I had to plug in 13.1% as a placeholder average.

Today, they issued a final, comprehensive press release; the overall average turned out to be slightly higher, at 13.6%:

How much someone’s premium will change depends on where they live, their age, whether or not they smoke, which insurer and plan they select, and how many people are covered.

“We knew that it would be difficult for the health insurers to initially set their rates without knowing who would sign up for coverage and what services they would use,” said Insurance Commissioner Mike Kreidler. “In fact, we were surprised when rates came in significantly lower than predicted in the first few years of the Affordable Care Act. I do believe this year’s change is a one-time adjustment and that we’ll see premiums level off as insurers gain experience and more people get covered.” 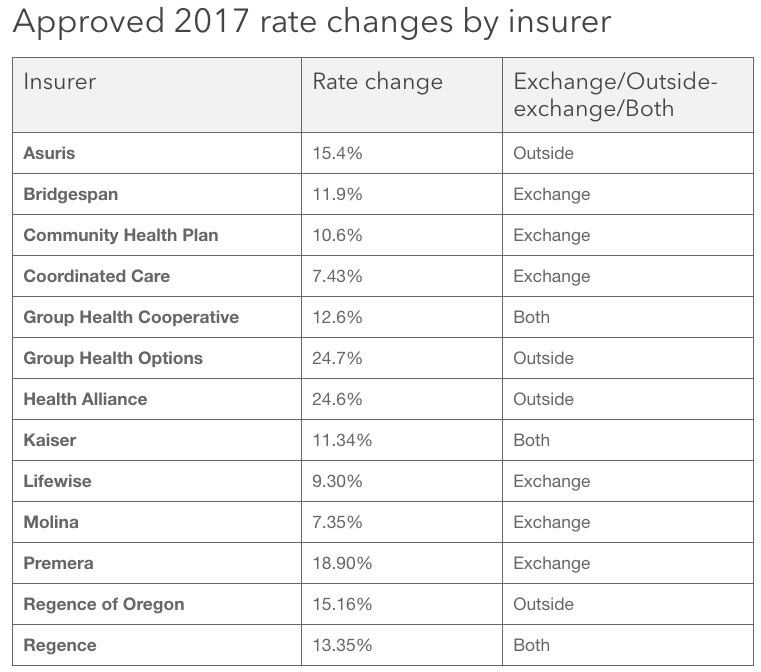 This leaves just 3 states with unknown "APPROVED" rate hikes: Louisiana, New Hampshire and Virginia (which is ironic, since Virginia was the very first state which I estimated way back in APRIL, if you can believe it.