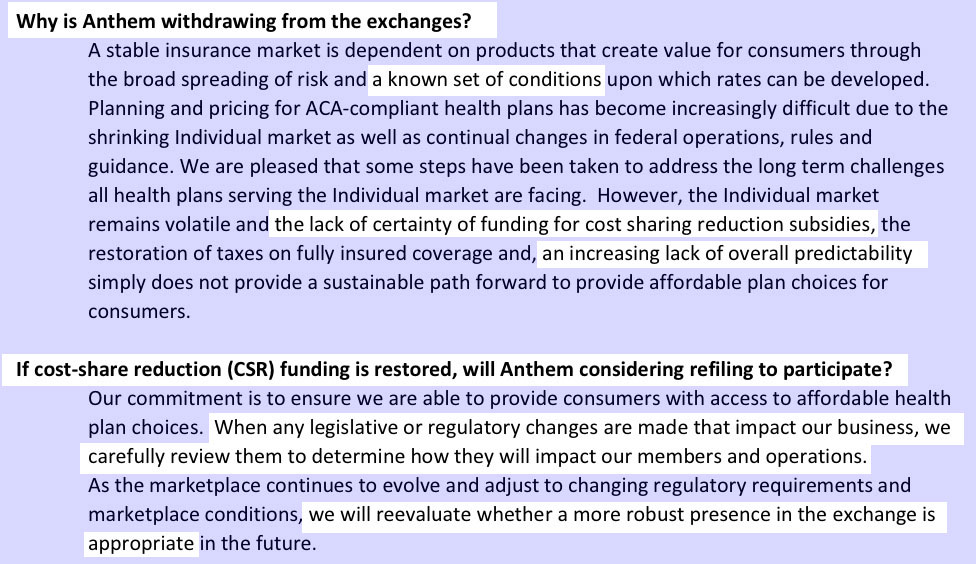 They once again specifically call out the CSR issue as a major cause of their decision, and "an increasing lack of overall predictability" pretty obviously refers to the Trump Uncertainty Factor regarding other issues like enforcement of the individual mandate, the GOP's repeal/replace efforts and so forth. It clearly doesn't refer to the "normal" state of the individual market risk pool, since 4 years in the carriers know what that looks like. They also all but say point-blank that if Congress formally makes good on the CSR payments they'll likely jump back in later this summer.

...The best part about all this, according to Eric Trump, is the charity's efficiency: Because he can get his family's golf course for free and have most of the other costs donated, virtually all the money contributed will go toward helping kids with cancer. "We get to use our assets 100% free of charge," Trump tells Forbes.

That's not the case. In reviewing filings from the Eric Trump Foundation and other charities, it's clear that the course wasn't free--that the Trump Organization received payments for its use, part of more than $1.2 million that has no documented recipients past the Trump Organization. Golf charity experts say the listed expenses defy any reasonable cost justification for a one-day golf tournament.

Additionally, the Donald J. Trump Foundation, which has come under previous scrutiny for self-dealing and advancing the interests of its namesake rather than those of charity, apparently used the Eric Trump Foundation to funnel $100,000 in donations into revenue for the Trump Organization.

And while donors to the Eric Trump Foundation were told their money was going to help sick kids, more than $500,000 was re-donated to other charities, many of which were connected to Trump family members or interests, including at least four groups that subsequently paid to hold golf tournaments at Trump courses.

All of this seems to defy federal tax rules and state laws that ban self-dealing and misleading donors. It also raises larger questions about the Trump family dynamics and whether Eric and his brother, Don Jr., can be truly independent of their father.

Especially since the person who specifically commanded that the for-profit Trump Organization start billing hundreds of thousands of dollars to the nonprofit Eric Trump Foundation, according to two people directly involved, was none other than the current president of the United States, Donald Trump.

So basically a normal day in Trump's America.

I'm writing up a photojournal of my 2-day sojourn later today, but wanted to get these items off my plate first.