UPDATE 1/17/16: This morning the Congressional Budget Office released their projections of how many people would likely lose healthcare coverage if the GOP proceeds with a partial repeal of the Affordable Care Act. My state- and county-level estimates assume a full repeal (including wiping out regulations like guaranteed issue, community rating and so forth), which I estimate would add up to around 24 million people without including "Young Adults on Parents' Plans", or around 25.3 million with them included.

The CBO's projection, however, like the Urban Institute's, assumes a partial repeal, which would remove Medicaid expansion, federal subsidies and the individual/employer mandate penalties...but would leave the rest in place. This would actually have a more devastating impact, as it would decimate the off-exchange (full-price) individual market as well. They project around 32 million people losing coverage by 2026 under this scenario...or roughly 8 million more individual market enrollees than the 8.9 million I'm estimating under the full repeal scenario.

Of course, the number of off-exchange indy plan enrollees varies widely from state to state and even county to county, but if you want to get an idea of how the state/county-level numbers would look under the CBO "partial repeal" projection, simply double the number of individual market enrollees to each state/county.

For instance, in Oakland County, Michigan, my estimate is ~35,000 highly-subsidized exchange enrollees and ~53,000 Medicaid expansion enrollees, or around 88,000 total. Under the CBO's projection, I'd add roughly 35,000 more off-exchange and unsubsidized on-exchange enrollees, for a total of ~123,000 people losing coverage.

Alternately, you could just increase the TOTAL number for each state by around 1/3 to get a rough idea of the maximum possible devastation.

I've pulled together all of my state/county-level breakout entries into a single location (scroll down for links to individual states). This way people can look up specific states to see what the potential impact of the ACA being repealed would be in terms of people losing their healthcare coverage. I even added this link to the main menu above.

Remember: I'm only including those who I expect could lose their coverage, not the impact to Medicare, pre-ACA Medicaid, Group Coverage and so on.

Some important caveats which apply to all county-by-county breakouts, and a few which only apply to specific states:

PRIVATE PLANS VIA THE ACA EXCHANGES:

For example: Let's suppose that in a given county, 10,000 people selected QHPs during open enrollment last year, of which 85% received subsidies, in a state where I expect about 5% growth this year.

Finally, there's no need to "break out" the District of Columbia numbers; I assume the whole District is basically considered a single county. 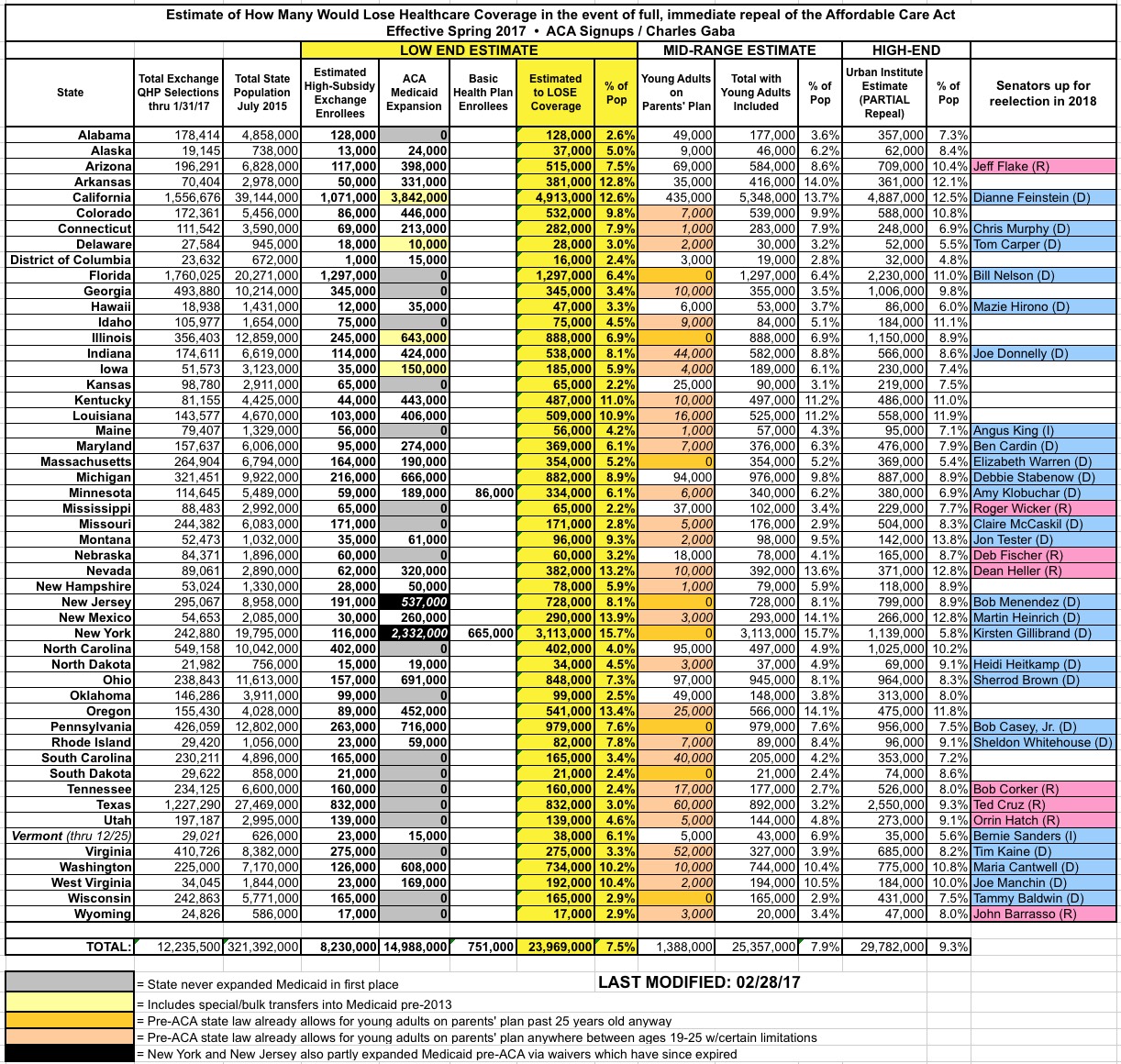 Case in point: Just two weeks ago, roughly 400.000 Louisianans were enrolled in ACA Medicaid expansion. As of yesterday that number had increased to nearly 406,000.

I'm updating the spreadsheet versions now, but in the meantime, here's the latest county-level breakout:

Nevada: Here's the ~382,000 residents who could lose coverage, by County and Congressional District

Nevada's Medicaid expansion data has been tricky to track down; the most recent hard number I had until now was 187,000 people statewide, and that was as of September 2015. According to this January 2017 article in the Las Vegas Review-Journal, however, that number has since grown to around 320,000 Nevadans.

In Nevada, , 89,000 people enrolled in exchange policies as of the end of January. Of these, I estimate around 62,000 of them would be forced off of their private policy upon an immediate-effect full ACA repeal, plus the additional 320,000 enrolled in Medicaid expansion, for a total of 382,000 Nevadans kicked to the curb. 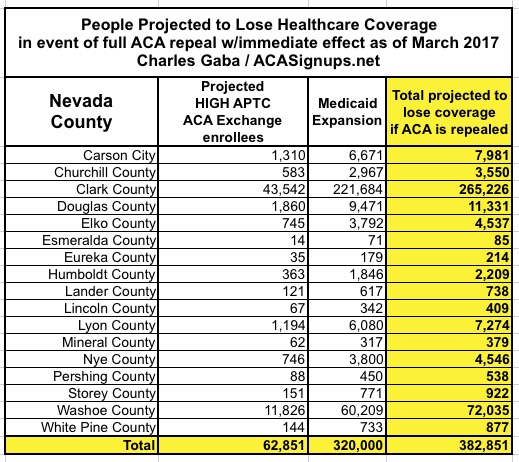 Louisiana: Here's the ~504,000 residents who could lose coverage, by Parish and Congressional District

Louisiana just expanded Medicaid via the Affordable Care Act last July, and as of Februay 16th had over 400,000 residents enrolled in the expansion program. All of those people would be kicked right back off of that coverage again if the ACA is repealed. In just 7 1/2 months...

California: Here's the ~4.9 MILLION residents who could lose coverage, by COUNTY and CONGRESSIONAL DISTRICT!

IMPORTANT: This is my county-level estimate for California. The congressional district breakout will be following soon.

Regular readers know that I started out the "How Many Could Lose Coverage..." project at the state level, then moved into analyzing the county-level data, before finally tackling the hardest challenge: Breaking them out by Congressional District.

The state level table includes all 50 states (+DC), while I managed to break out the county level data for 34 states so far before moving into the Congressional District analysis by popular demand. There, I've managed to crunch the numbers for 43 states so far.

UPDATED: How many could lose coverage in your CONGRESSIONAL DISTRICT?

MAJOR UPDATE 3/22/17:​ As I've noted repeatedly, my estimates of how many people are at risk of losing their coverage has always been based on the assumption of full repeal with immediate effect and, most importantly, no replacement healthcare policy whatsoever. I had to do it this way at first because there was no Republican replacement plan available until a couple of weeks ago. Then, when the AHCA plan was released, I didn't have the time or expertise to properly overhaul my projections accordingly.

Fortunately, the Center for American Progress does have the time, manpower and expertise to do exactly this. They crunched the numbers and, based in part on the recent Congressional Budget Office scoring of the AHCA, put together their own fully-detailed analysis of what impact partially repealing the ACA by passing the AHCA would have on coverage losses.

The amazing thing is that the grand total number losing their coverage would be virtually identical in either scenario! The numbers vary widely from state to state and district to district, but when you add it all up, it still comes in at around 24 million people either way!

Anyway, I've put together SIDE BY SIDE COMPARISON TABLES for each state here.

Unfortunately, due to the sheer amount of time it would take to do so, and the fact that the House is voting on the AHCA tomorrow (Thursday, 3/23), I don't have time to completely update/overhaul the Google Docs version of this data.

UPDATED: Arkansas: Here's the ~380,000 residents who could lose coverage, by county

In Arkansas, 70,404 people enroll in private exchange policies as of the end of January. I estimate around 50,000 of them would be forced off of their private policy upon an immediate-effect full ACA repeal, plus another 331,000 enrolled in Arkansas' "Private Option" ACA Medicaid expansion program for a total of 380,000 residents kicked to the curb.