Back in November I noted that enrollment in Medicaid via ACA expansion has increased dramatically here in Michigan since the COVID-19 pandemic struck, increasing by 23% from 673,000 in February 2020 to 829,000 in November.

(LANSING, MICH) After an extensive joint outreach campaign by the Michigan Department of Insurance and Financial Services (DIFS) and the Michigan Department of Health and Human Services (MDHHS), more than 1 million Michiganders obtained health coverage for 2021 during the Health Insurance Marketplace open enrollment period or through the state’s expanded Medicaid program.

Thousands of Michiganders have lost health coverage during the COVID-19 pandemic, and the Michigan Department of Insurance and Financial Services (DIFS) is offering virtual town hall events to help answer questions about open enrollment on the Health Insurance Marketplace, which runs until Dec. 15.

These live online town hall meetings are part of a series of events that will help consumers learn and ask questions about signing up for a health plan on the Health Insurance Marketplace. To attend a virtual town hall event, click the event link at its start time. Instructions for attendees are available and explain how to join an event and ask questions.

Michigan: After 8 months of doing nothing, GOP wants to impeach Gov. Whitmer for saving thousands of lives

LANSING – Emergency orders Gov. Gretchen Whitmer has issued under the Emergency Powers of Governor Act are struck down, effective immediately, the Michigan Supreme Court said Monday in a 4-3 order that added an exclamation mark to an Oct. 2 ruling.

Monday's ruling means hundreds of thousands of Michiganders could lose their unemployment benefits "in a matter of days," Whitmer spokeswoman Tiffany Brown said. Among the orders struck down, and not replaced by a health department order, is one that extended Michigan unemployment benefits to 26 weeks, up from 20.

Way back in July (a lifetime ago!), Michigan's Dept. of Financial Services posted the state's preliminary 2021 individual & small group rate filings. At the time, the average premium changes being asked for were around a 1.3% increase on the individual market and 1.4% on the small group market.

Last week, a few days ahead of the launch of the 2021 Open Enrollment Period, they posted the approved 2021 rates...and there's almost no changes at all. The only significant change was to Meridian's request, which was dropped from a 2.7% increase to a 5.6% decrease. Also, National Health Insurance dropped out of the Small Group market, but they don't appear to have anyone enrolled this year anyway:

A month ago, incumbent Democratic Senator Gary Peters of Michigan and his Republican challenger John James were both interviewed as part of a Detroit Regional Chamber series on several issues, including healthcare policy and the ACA.

That was late July.

Let's take a look at mid-October, shall we?

Here's a graph of official COVID-19 positive test cases and fatalities per capita for both Michigan and Florida. Cases are per 1,000 residents; deaths are per 10,000 in order to make the trendlines more visible:

Michigan: John James thinks "tort reform" is the key to covering pre-existing conditions, and other head-scratchers about his wanting to repeal the ACA

This morning, U.S. Senator Gary Peters (D-MI) and his Republican opponent, John James, were interviewed online by Nolan Finley of the Detroit News and Stephen Henderson of DPTV & WDET. Here's the verbaitm transcripts of each of their healthcare/ACA Q&A sections, Peters first:

HENDERSON: "One of the things which has been made really manifest during the COVID-19 pandemic is the weakness of our healthcare system. We're now coming up on about a decade of life under the Affordable Care Act, which of course expanded access to insurance and made some other changes, but there are still obviously a lot of inefficincies...there are a lot of insufficiencies.

Give us an idea of what you would support in terms of changes to the healthcare system, changes to the Affordable Care Act, to get more people covered at lower costs and make the system work better."

Michigan is the 8th state (by my count) where the insurance carriers have posted their preliminary 2021 premium rate change filings. Every year brings some new twist (in 2018 it was CSR reimbursement payments being cut off; in 2019 it was the zeroing out of the ACA's federal individual mandate penalty; in 2020 it was sort of the repeal of the ACA's health insurer tax (HIT), although that didn't actually happen until after 2020 premiums had already been locked in; and for 2021...it's the COVID-19 pandemic, of course.

I've therefore added a new column for my weighted average rate change spreadsheets. So far only a handful of carriers have tacked on any substantial rate changes due to expected cost increases from testing & treatment of COVID-19 next year...the general rule of thumb seems to be that the added costs are pretty much gonna be cancelled out by reduced claims from non-COVID healthcare services (delayed/cancelled treatments/procedures, etc). 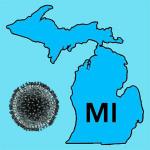 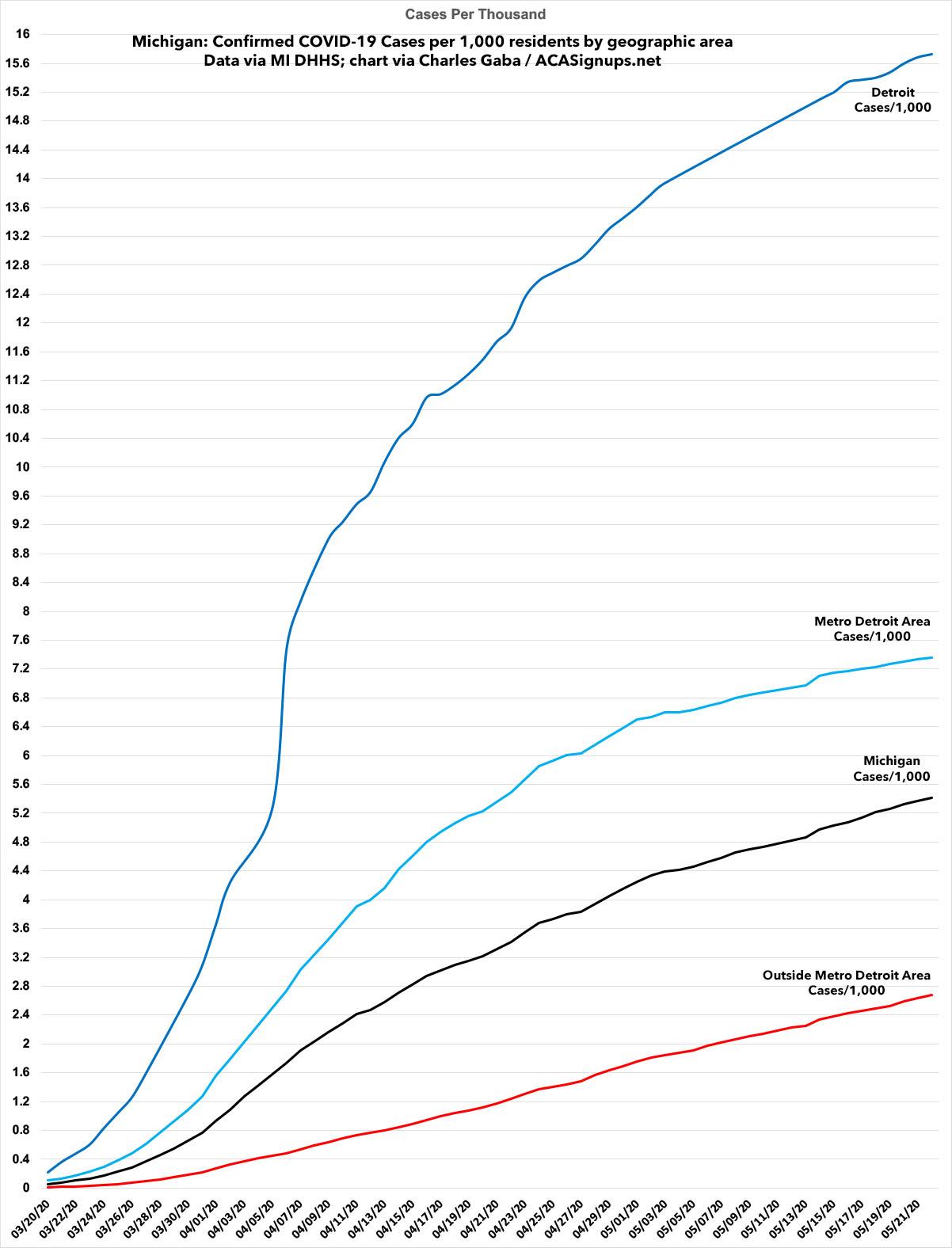 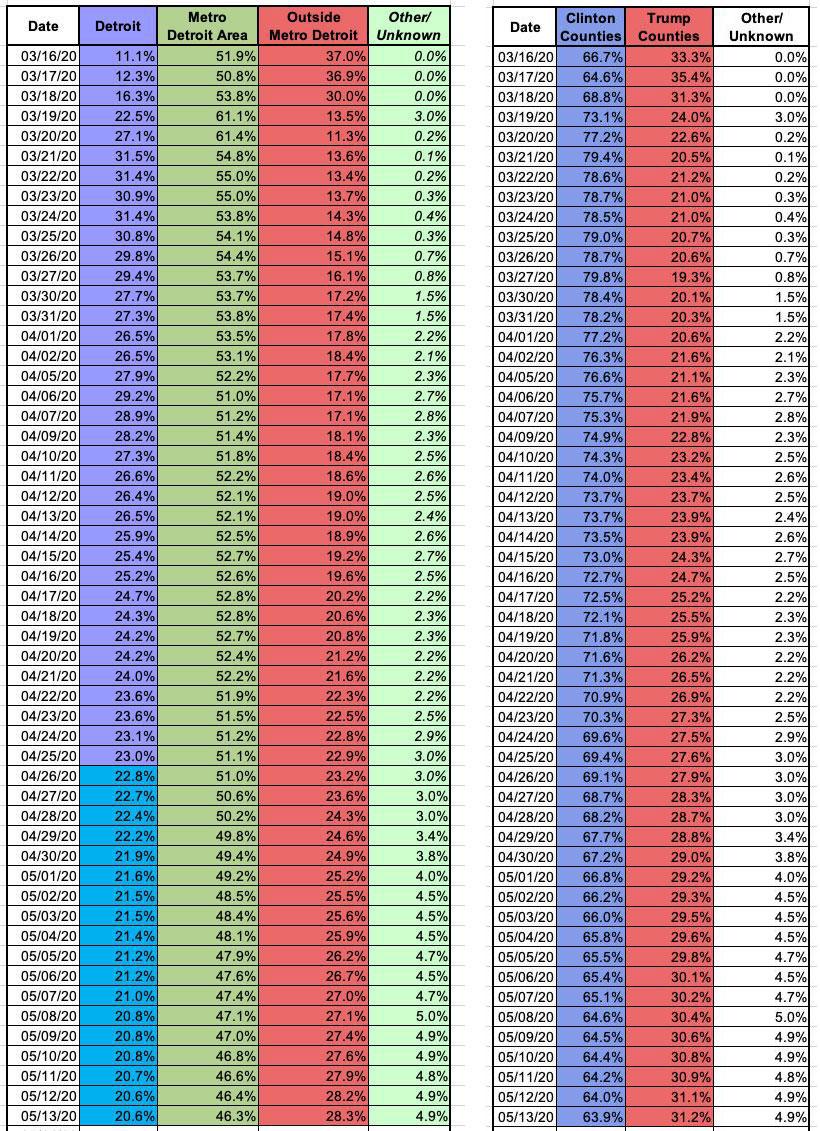 via a press release from the Michigan Dept. of Insurance & Financial Services:

The Michigan Department of Insurance and Financial Services (DIFS) announced that the state has received agreements from nearly all of the state’s health insurance companies to waive cost-sharing, including copays, deductibles, and coinsurance for coronavirus (COVID-19) testing and treatments. The Whitmer Administration and DIFS had worked with insurers to waive these costs.

“Michiganders that are fighting for their lives should not have the extra burden of fighting with their health insurer to cover the costs of their care,” said Governor Gretchen Whitmer. “I am thankful that health insurers agreed to cover Michiganders’ coinsurance, deductibles, and copays as we fight this virus. It’s going to take all of us doing our part to slow the spread of COVID-19. We will get through this together”

Consumers with these individual and group health plans will not be charged cost-sharing for coronavirus-related medical treatment, such as primary care visits, laboratory testing, emergency room visits, ambulance services, and FDA-approved medications and vaccines for COVID-19 when they become available.