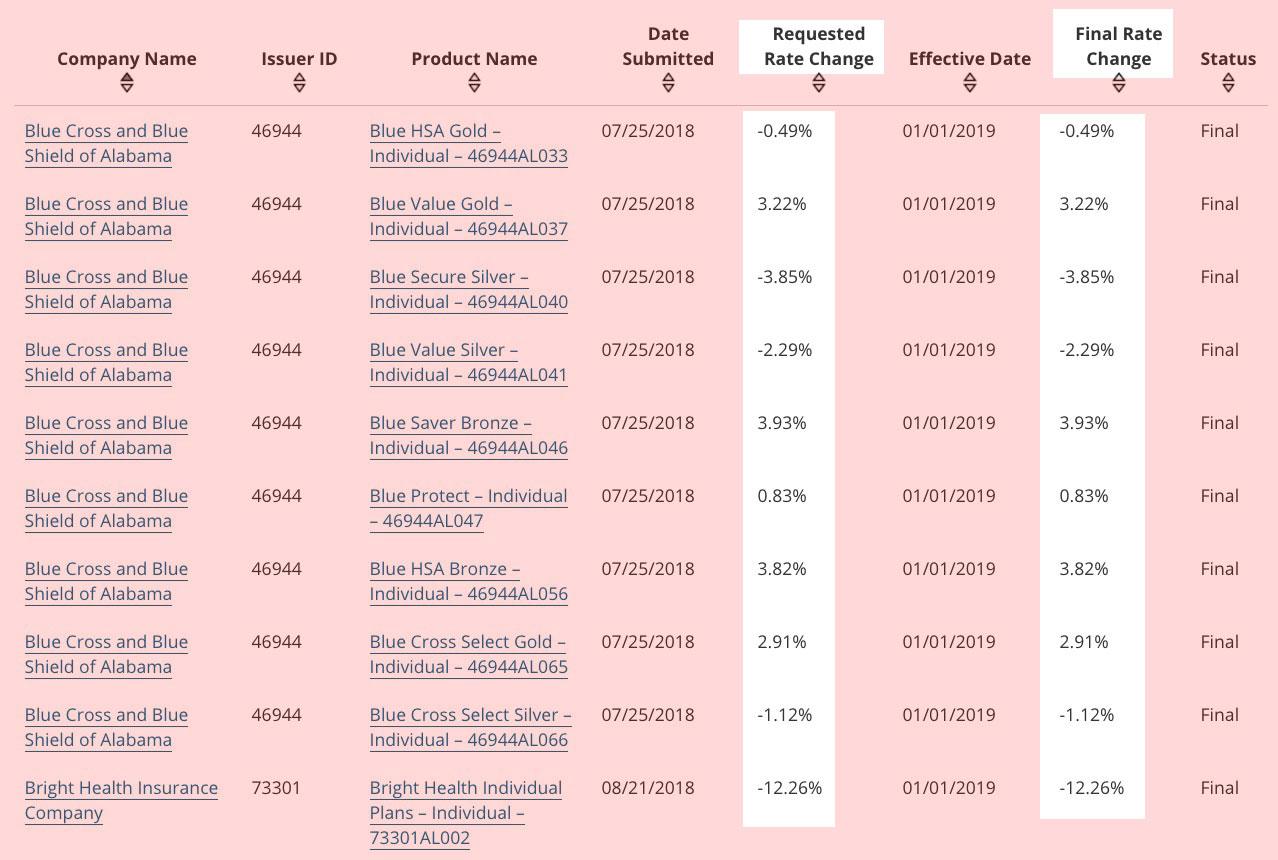 Mississippi: Preliminary 2019 #ACA rate hikes: FLAT, but would likely have DROPPED ~10% without #ACASabotage

Mississippi is pretty easy: Only two carriers. I have no idea what their relative market share is (the enrollment data along with a lot of other stuff is redacted in their filings), but in this case it really doesn't matter because both of the carriers are requesting nearly identical rate changes anyway...which is to say, just about no change whatsoever.

The Urban Institute projected that #MandateRepeal and #ShortAssPlans would add a 17.2 percentage point rate hike factor in Mississippi. I generally knock 1/3 off of their estimates to err on the side of caution (11.4%), but given Ambetter specifically stating that they didn't add any increase to account for #ShortAssPlans (why?? interesting!), I'm shaving off a bit more and assuming a flat 10% impact.

This means that unsubsidized Mississippi enrollees would likely have saved a good $800 apiece next year without Trump/GOP efforts to undermine the ACA this year.

There's only two carriers participating in Mississippi's individual market next year (plus Freedom Life, which once again is just a shell company here). They're asking for 16.1% average rate hikes, and since there's no mention in any of the filings about CSR payments not being made or the mandate not being enforced, I'm assuming that increase doesn't account for those factors.

The Kaiser Family Foundation estimates MS carriers would have to jack up Silver plans by a whopping 27% to cover lost CSR reimbursements. 87% of MS exchange enrollees receive CSR help, so that amounts to a stunning 23.5% average rate hike if spread across all individual policies. As a result, assuming they aren't made, I estimate Mississippi's average rate increase would be an ugly 39.6%.

Mississippi: Here's the ~65,000 residents who could lose coverage, by county

Mississippi remains one of only two states which still don't have their 2017 Rate Filings posted over at HC.gov's Rate Review database. In addition, while Mississippi does use the SERFF system for other types of insurance, major medical doesn't appear to be among them. Finally, while the MS Dept. of Insurance does include a special website specifically designed for searching/comparing rate changes for health insurance policies...it doesn't appear to have been updated in awhile (the only recently listings are for obscure carriers which seem to be mostly offering short-term plans and other "mini-med" types of policies, not full ACA-compliant plans.

The point is that I don't have the actual rate filings to go on for now...but thanks to commenter farmbellpsu for bringing my attention to this (corrected) news article which escaped my radar last week:

UPDATE: This story has, thankfully, gone quite viral since I originally posted it yesterday morning. One important clarification: I estimated the monthly cost for treatment at around $5,200. According to Ms. Nichols in this local story about the situation in the Clarion-Ledger, the cost for her daughter’s treatment/medication is around $2,000; the balance appears to be for her husband, who also has diabetes. This actually makes the family more sympathetic, because she’s only asking for state assistance for her daughter’s portion of the bill.

In addition, according to the updated local story, the message appears to have gotten through to Rep. Guice (at least to the point that he's issued an apology, anyway):

Guice, who told The Clarion-Ledger Tuesday morning "I don't do interviews" and declined to comment, issued an apology Tuesday night.