Well, I've managed to put together estimates (some very rough, some pretty specific) of the weighted average requested ACA-compliant individual market rate hikes for 49 out of 50 states, along with the District of Columbia. This leaves just one state left: Minnesota. For whatever reason, I've been informed that Minnesota's requested rate filings won't be available to the public until September 1st, which is too late for my purposes...because by that point, many of the other states will have started releasing their approved rates for next year (in fact 3 of them--Oregon, New York and Mississippi--have already done so). Minnesota's approved rates will be posted on October 1st. It's always been my intent to lock down the requested rates for every state before the approved numbers are posted in order to run a comparison between what was asked for and what the final approved rate changes are.

The only real estimate I have until Sept. 1st, then, is this quote from Christopher Snowbeck's StarTribune article on June 23:

Minnesota: Off-Season QHPs drop off again; Medicaid/MNcare up another 36K

My posts have been pretty light of late; between being on vacation, a big work backlog when I got back, and getting wrapped up in the RNC and DNC craziness, I've been a bit off-track. I'm hoping to catch up a bit over the next week or so.

Case in point: Last week, the Minnesota exchange, MNsure, posted their latest monthly enrollment numbers. Normally they include a full slideshow dashboard report, but I can't find it for July. The basic numbers through July 20, however, are:

For the entire off-season period, MNsure has added 11,533 QHP selections, or an average of 68 per day. Extrapolated out nationally, that would be about 10,300 per day nationally, although in prior years off-season SEPs have averaged between 7,000 - 9,000 per day.

I'm still waiting on the 2017 requested rate changes for Minnesota's individual market, but there's one carrier which won't be asking for any changes: Blue Cross Blue Shield of Minnesota:

"Based on current medical claim trends, Blue Cross is projecting a total loss of more than $500 million in the individual [health plan] segment over three years," BCBSM said in a statement.

The Blues reported a loss of $265 million on insurance operations from individual market plans in 2015. The insurer said claims for medical care far exceeded premium revenue for those plans.

Minnesota: Off-Season QHPs ramping way up; over 10K since January

Hmmm...this is kind of interesting. As I noted a few weeks ago, here's what the QHP enrollment pattern has looked like in Minnesota since the end of the 2016 Open Enrollment Period:

Here's the latest report from the MNsure 6/15 board meeting:

It's time to take a breather from my ongoing 2017 Rate Hike Request project to check in on a couple of off-season enrollment numbers. First up is Minnesota. Here's how the QHP tally (cumulative, not currently effectuated) has gone since open enrollment ended in the Land of 10,000 Lakes (note: Michigan actually has 11,000, so there!):

Minnesota: hCentive to the rescue?

As everyone who's been following the ACA over the past few years knows, the October 2013 launch of HealthCare.Gov and 16 state-based marketplace websites was not one of the prouder moments in the Obama administration's history. The federal exchange (which covered 35 states at the time) was a disaster out of the gate, as well about half of the state-based websites.

Over the past three Open Enrollment Periods, of course, most of the technical headaches have been worked out of most of the sites. HealthCare.Gov operates like a dream now (update: well, relatively speaking, anyway) and major improvements have been made in most of the state exchanges as well. In 5 cases, the solution was to either scrap the original platform and start over (Maryland and Massachusetts) or to say "to hell with it", drop their own platform completely and move home to the Mothership (Oregon and Nevada in 2015; Hawaii starting this year). Washington State kept their own platform but gave up trying to handle billing for their enrollees, joining just about every other state in letting the carriers handle payments directly.

Minnesota: Off-Season QHPs ramping back UP; 8% *more* QHP effectuations in March than February?

During the official Open Enrollment Period, MNsure enrolled 85,390 Minnesotans in Qualified Health Plans. Unlike most of the state exchanges (and HC.gov itself), MNsure has been dutifully continuing to update their data every month or so during the off season, providing an interesting glimpse into how the Special Enrollment Period (SEP) is going:

,,,and in the latest update:

Didja notice that? While the private QHP enrollment rate obviously dropped off tremendously after open enrollment closed (duh!), the SEP enrollment rate has dramatically increased since then, from 21/day in early February, to 55/day in late Feb/early March, to 91 per day over the past month. While it's still just 10% of the Open Enrollment rate, over 4x as many people are signing up for QHPs via MNsure now as were at the start of the off season.

During the official Open Enrollment Period, MNsure enrolled 85,390 Minnesotans in Qualified Health Plans. Yesterday they held their March board meeting and updated their numbers through the first 5 weeks of the off season: 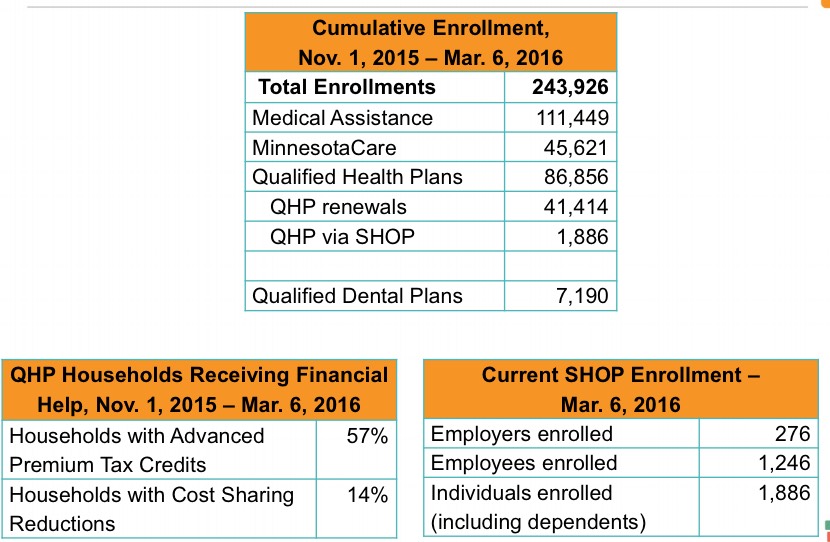 During Open Enrollment, MNsure averaged 928 QHP selections per day. During the off season, this has dropped down to 42 per day, or about 4.5% of the OE3 daily average.

If you extrapolate this nationally (and of course there's no way of knowing whether Minnesota is remotely representative), that would translate to around 6,200 people selecting exchange-based QHPs per day during the off season, which is lower than the past two years (7,000 - 9,000/day) but certainly within reason.

That's 300 more people who signed up for QHPs in the first 2 weeks of the off-season, plus another 6,500 added to MinnesotaCare and over 17,000 added to Medicaid (both of which are year round).

The QHP number (just 21 per day) is kind of interesting when compared to Rhode Island, which has has averaged 90 additional people per day in the first 2 weeks of February, yet has a population only 1/5th the size of Minnesota's. When adjusted for total population, Rhode Island's off-season rate is over 21x that of Minnesota.

The big difference, of course, is that Minnesota's BHP program (MinnesotaCare) cannibalizes the QHP market tremendously. When you add those 6,500 to the mix, MNsure has averaged 485 per day...or slightly higher than Rhode Island when adjusted for inflation (around 97/day when divided by 5).

MNsure, the Minnesota ACA exchange, is the first one to report their final, official 2016 Open Enrollment numbers, and they have much to be proud of:

85,390 Minnesotans Enroll in Private Coverage Through MNsure During the 2016 Open Enrollment Period

MNsure has broken the 75K mark:

As of January 10, MNsure had enrolled 69,671 Minnesotans into private coverage. This means MNsure has seen an increase of 5,329 private plan enrollments in five days. In addition, about 45 percent of private plan enrollees are new to MNsure for 2016. This is the highest percentage of new enrollees nationwide.

MNsure's goal is to enroll 83,000 Minnesotans by the end of open enrollment.

This will be the final enrollment update until preliminary end of open enrollment numbers are released on Monday, February 1.

Minnesota held their monthly board meeting. At first glance, it looks like they've managed to add 1,991 QHPs since December 28th, which would be impressive...except that, as a later slide shows, 1,871 of these are due to including their SHOP (small business) enrollees in today's number versus these folks not being included in the news article a week or so ago.

Nothing wrong with this, actually, but it does mean that the net gain of individual market QHPs is far less impressive (just 120), for a total of 67,800:

UPDATE/CORRECTION: I've been informed by the MNsure exchange that, in fact, they did add 1,991 individual QHP enrollments since 12/28/15 after all; apparently the 67,680 figure from a couple of weeks back also included SHOP QHPs, so the net increase really is nearly 2,000 people, which is indeed very impressive.

Adding 1,991 in just 13 days represents a 3.0% increase during the slowest part of the enrollment period. By comparison, as I noted earlier today, HC.gov added just 157,536 people from 12/27 - 1/09...or only 1.8% in 14 days. Minnesota has basically been doubling the enrollment rate of the federal exchange since Christmas, which is interesting even if the raw numbers are still small.

In addition, as MNsure noted in their correction: "45% of our QHP enrollments are NEW to MNsure in 2016. That's the highest percentage nationwide according to the data HHS released about a week and a half ago now."

My apologies for the error, and mazel tov on the improved numbers!

Minnesota: Here's an amusing development for you...

Less than 24 hours after Republican Kentucky Governor Matt Bevin decided to pull the plug on the kynect ACA exchange for no particularly good reason, a completely different recommendation was made by a task force subcommittee in Minnesota:

A subcommittee of a state task force recommended Monday continuing with a state-run health insurance exchange like MNsure for now, rather than transferring Minnesotans to the national exchange called HealthCare.gov

Moving to the federal website would be costly and wouldn't work with the state's MinnesotaCare insurance program, said a report endorsed by the 11-person subcommittee of the state task force on health care finance.

Plus, by moving to HealthCare.gov, the state would lose control over its network of health insurance navigators that help people enroll in coverage, according to the report.

I've been getting a little worried about the Minnesota exchange of late. Their first two years were pretty rough, and their most recent update prior to today had them at only 26.5K QHPs as of 12/13. Of course, that didn't include the critical final few days before the January enrollment deadline...nor did it include the extended deadline for Minnesota, which was pushed all the way out to 12/28.

Well, it looks like my concerns were unfounded, and the extension definitely did the trick, because MNsure just announced that as of 12/28/15, they had enrolled 67,680 people in private policies:

Nearly 68,000 Minnesotans Enroll in Private Plan Coverage for 2016 through MNsure