Washington State: Here's the ~725,000 residents who could lose coverage by county

OK, it looks like I may end up doing this for a bunch of states after all.

A few days ago, the Washington State exchange posted their first official enrollment report: 161,381 QHP selections as of 12/13.

Today, as part of a deadline reminder press release (WA is among 3 states which are still letting people sign up for January coverage as late as midnight Friday), they gave a rough update:

The Washington Health Benefit Exchange today is warning customers without 2017 coverage that this Friday, Dec. 23 at 11:59 p.m. is the deadline to sign up for health and dental plans through Washington Healthplanfinder that begin on Jan. 1.

In yesterday's state-by-state roundup, I noted that there are 4 states where I didn't have any enrollment data whatsoever yet (ID, NY, VT & WA), plus only very limited numbers out of DC. Today, the Washington HealthPlanFinder scratched one of those off the list by providing the following update:

Since the start of open enrollment on Nov. 1, more than 160,000 individuals and families have already signed up for Qualified Health Plans (QHP) through Washington Healthplanfinder. The updated total reflects an increase of more than 20,000 QHP selections over the same point in the open enrollment period last year. In addition to 2017 QHP selections, more than 22,000 Washingtonians have signed up for Qualified Dental Plans (QDP) that are now offered through Washington Healthplanfinder.

The Washington HealthplanFinder just released a comprehensive report detailing their 2016 exchange enrollment status. It's important to keep in mind this has little to do with the ongoing 2017 open enrollment period we're in the middle of:

Total effectuated QHP enrollment as of September 2016: 166,098 people...or about 5% higher than they had in March, according to the official CMS report. This is unusual; almost every other state has seen a substantial drop-off in effectuated enrollment. The only other state which constantly increases effectuations during the off-season is Massachusetts, and that's mainly because they have special "ConnectorCare" policies which are available year-round to anyone. On the other hand, according to the WA exchange report, there has been a slight net drop since March...of around 4.5% (see 2nd slide below). Not sure what to make of that. Either way, however, the point is that attrition is unusually low compared to other states.

The Washington Insurance Commissioner just issued the following press release. On the surface, it looks straightforward: 13.5% avg. requested, 13.1% approved. However, it's more complicated than that, because that 13.1% figure only applies to fewer than half of the plans (46 out of 98). The other 52 are still being reviewed:

OLYMPIA, Wash. – The Office of the Insurance Commissioner (OIC) has approved 46 individual health plans from seven insurers who will offer them in the Exchange, Wahealthplanfinder (www.wahealthplanfinder.org), for sale in 2017. The Washington Health Benefit Exchange Board is scheduled to certify the approved insurers and their plans at its board meeting later today.

Regence Blueshield also filed 21 plans for sale in the Exchange and Bridgespan filed 31 plans. Both companies’ filings and rates are still under review. They must be approved by the OIC before they can be considered for certification by the Exchange. 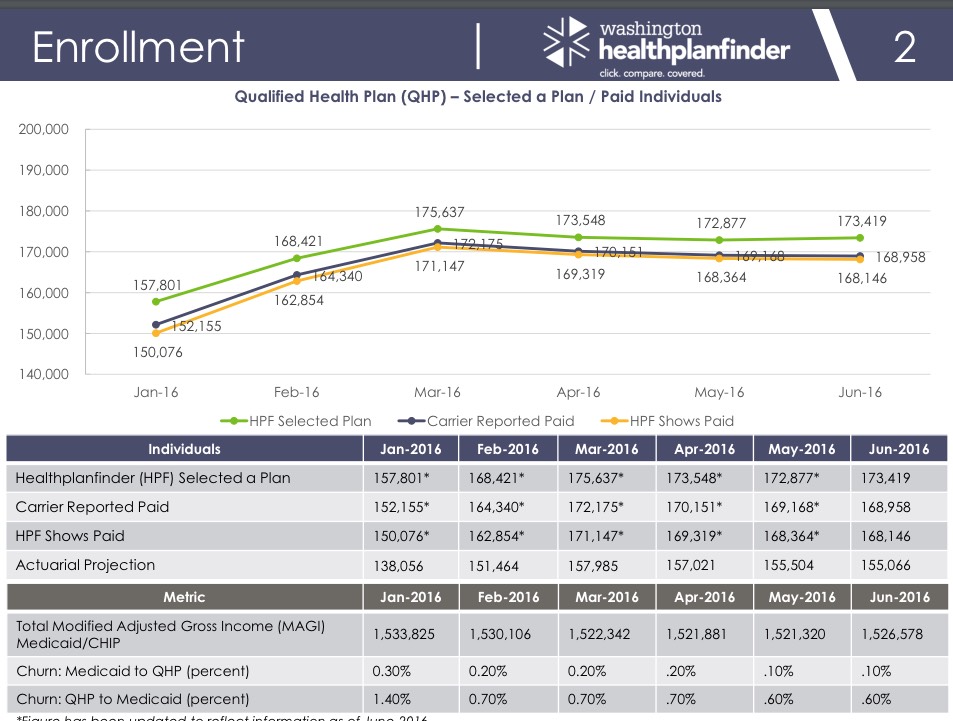 Last month I noted that the Washington Healthplanfinder was reporting currently effectuated QHP enrollment at 170,527 as of the end of March, a 15.0% drop from the official number of QHP selections during the 2016 Open Enrollment Period. I also noted that due to some confusion about how the numbers are reported by the exchange, it could also be argued that WA has seen just a 6.6% net drop, depending on how you look at it.

However, since 200,691 is the official number included in the ASPE report, I'm finally letting that one go...and actually, that's OK, because a 15% drop by 3/31 is fairly close to what I would expect anyway (a bit higher than the 13% national drop from last year, but not out of line).

Anyway, the WA exchange just released their May report (with data through the end of April), and it's actually pretty good--there's only been a very slight net drop since March, for an overall drop of just 15.2% from the 200K figure:

Washington State: Premera asks for 19.6% hike, pulling out of some counties

This year, Washington State has a total of 16 carriers offering policies on the individual market: 13 via the ACA exchange, plus another 3 selling off-exchange only (one of them, Regence Blue Shield, seems to be selling both on and off exchange, but I might be misunderstanding something there):

2016 insurers with plans approved to be certified by the Exchange, Wahealthplanfinder:

Coming on top of yesterday's announcement that their state exchange broke the 200,000 QHP enrollment mark this year, Washington State Insurance Commissioner Mike Kreidler has released a new report laying out the uninsured rate for the entire state population:

OLYMPIA, Wash. – The number of people without health insurance in Washington state has dropped from 14.5 percent in 2012 to an estimated 7.3 percent or 522,000 people in 2015, according to a new report issued today by Insurance Commissioner Mike Kreidler.

Nearly every county in Washington saw a drop in the uninsured

The report highlights the positive impact of the federal Affordable Care Act in Washington with county-by-county data on the uninsured and the law’s effect on many segments of the population.