So, in addition to their standard Weekly Snapshot Report, CMS issued a more comprehensive mid-OEP (Open Enrollment Period) press release this morning which not only finally breaks out the HealthCare.Gov enrollment data by state, but also includes partial 2022 OEP data for the 18 state-based ACA marketplaces (SBM). Each press release has some unique information, while some of it is duplicated, so this post sort of merges the two together, along with some additional analysis by myself.

The Centers for Medicare & Medicaid Services (CMS) reports that nearly 4.6 million Americans have signed up for 2022 individual market health insurance coverage through the Marketplaces since the start of the 2022 Marketplace Open Enrollment Period (OEP) on November 1. This includes 3.9 million plan selections in the 33 states using the HealthCare.gov for the 2022 plan year, through December 4, 2021 (Week 5), and 625,000 plan selections in the 17 states and the District of Columbia with State-based Marketplaces (SBMs) that are using their own eligibility and enrollment platforms, through November 27, 2021 (Week 4). Total nationwide plan selections include 923,000 consumers (20% of total) who are new to the Marketplaces for 2022, and 3.6 million consumers (80% of total) who have active 2021 coverage and returned to their respective Marketplaces to renew or select a new plan for 2022.

The Centers for Medicare & Medicaid Services (CMS) released a new monthly National Marketplace Open Enrollment report shows that, so far, nearly 4.6 million Americans have signed up for 2022 health coverage through HealthCare.gov and State-based Marketplaces since the start of the 2022 Open Enrollment Period on November 1. The assistance from the American Rescue Plan continues to drive affordability and accessibility of health coverage with the number of consumers getting coverage for $10 or less per month after tax credits nearly doubling compared to this time last year. Ninety five percent of consumers in HealthCare.gov states are receiving premium tax credits to lower the cost of their monthly premiums.

“We will keep saying it: health care in America should be a right, not a privilege. The Biden-Harris Administration is committed to making life-saving health care accessible and affordable for everyone who needs it,” said Health and Human Services Secretary Xavier Becerra. “Today’s report is proof that our efforts are yielding results. Thanks to our unprecedented outreach campaigns and investments from the American Rescue Plan, millions of people across the nation are gaining health insurance with lower premiums and more choices than ever. We will continue working to get more people covered throughout the remainder of the Open Enrollment Period.”

Consumers, including returning customers, who choose one of the many quality, affordable plans on HeathCare.gov by December 15 and pay their first month’s premium will receive health care coverage starting on January 1. State-based Marketplaces also have similar deadlines in December for consumers to obtain January 1 health care coverage.

"Affordability continues to drive enrollment during this Open Enrollment period, and we are excited to see so many individuals and families taking advantage of the many affordable and quality plans available," said CMS Administrator Chiquita Brooks-LaSure. "We want to encourage people who are uninsured or those who want to change coverage to visit HealthCare.gov by December 15 so they can receive health care coverage next year."

Here's the national summary and state-by-state breakout (again, through Week 5 for the 33 HC.gov states; through Week 4 for the 18 SBM states): 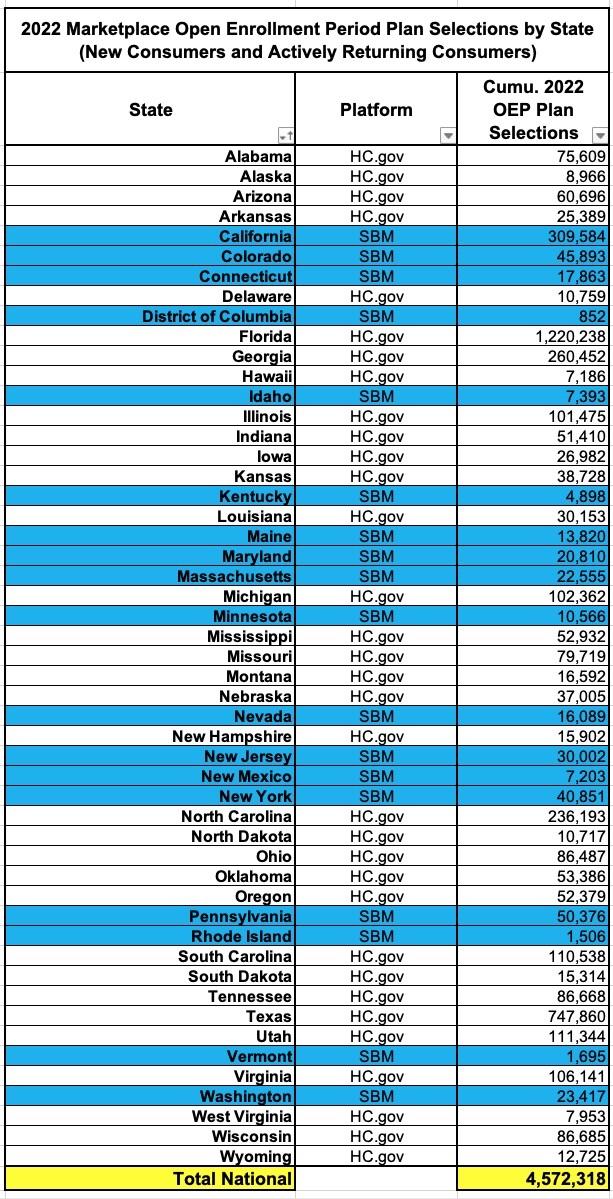 While the state-level breakout is welcome, it's important to remember that the HC.gov data above is actually only for 34 days instead of 35 last year...because CMS counts "weeks" as running from Sunday - Saturday, and this year November 1st started on a Monday.

This means a proper year over year comparison has to be based on a per-day average. I can only do this for the 33 HC.gov states, unfortunately; some of the SBMs changed their auto-renewal policies between last year and this year, so there's no easy way to run a comparison of active renewals + new enrollees only for all of them. CMS has obviously done that for NJ, NY, PA & VT, but that level of granular data isn't available to me yet.

For the 33 HC.gov states, however, breaking them out on a per-day average (see table below) you can see that federal exchange enrollment is actually up over 8.5% year over year, not 5%. 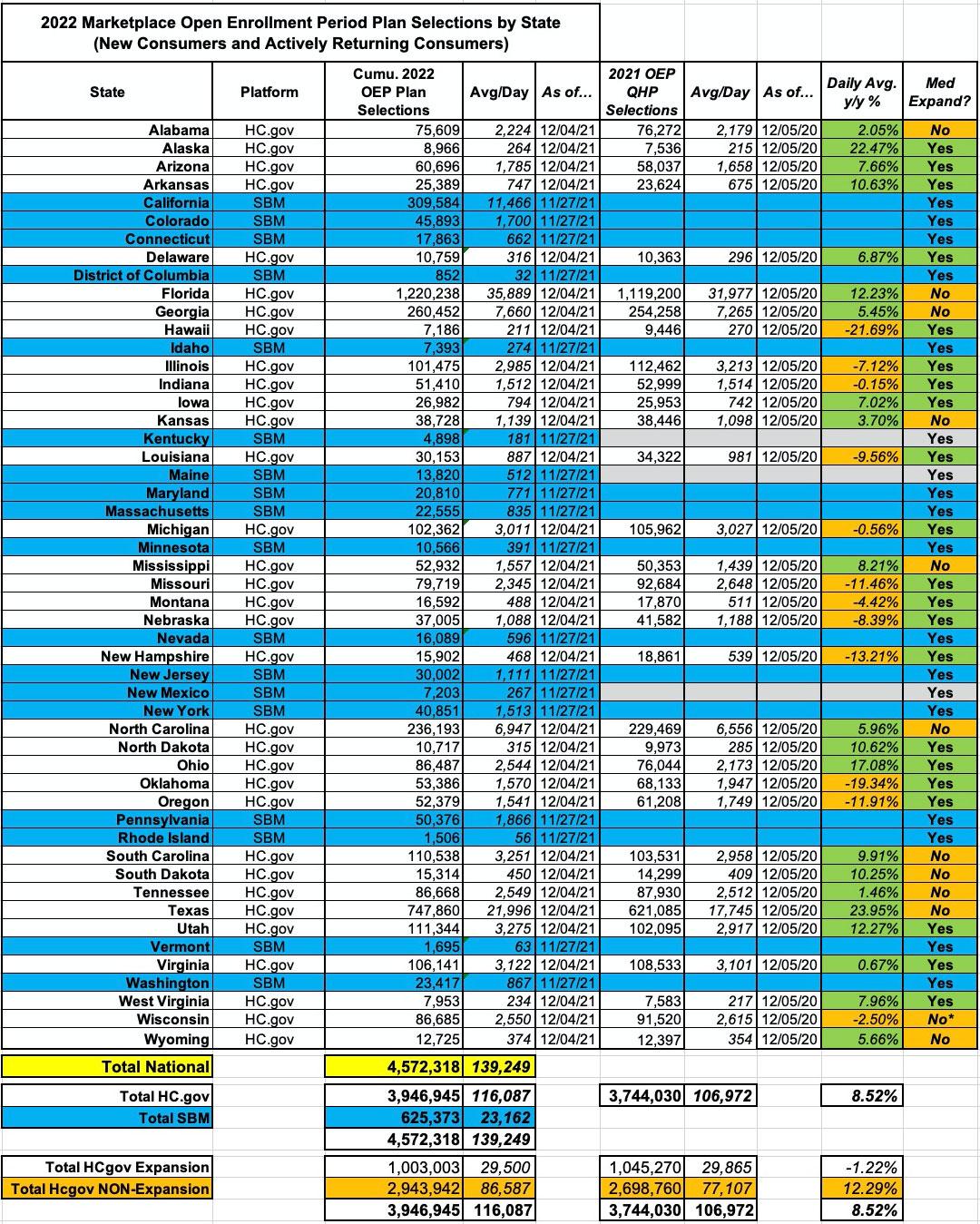 At the state level, when adjusted for the missing day, Texas is actually up a stunning 24% vs. last year at the same point. Other states up by double digits include Alaska, Ohio, Utah, Florida (actually up 12.2%), Arkansas, North Dakota and South Dakota: 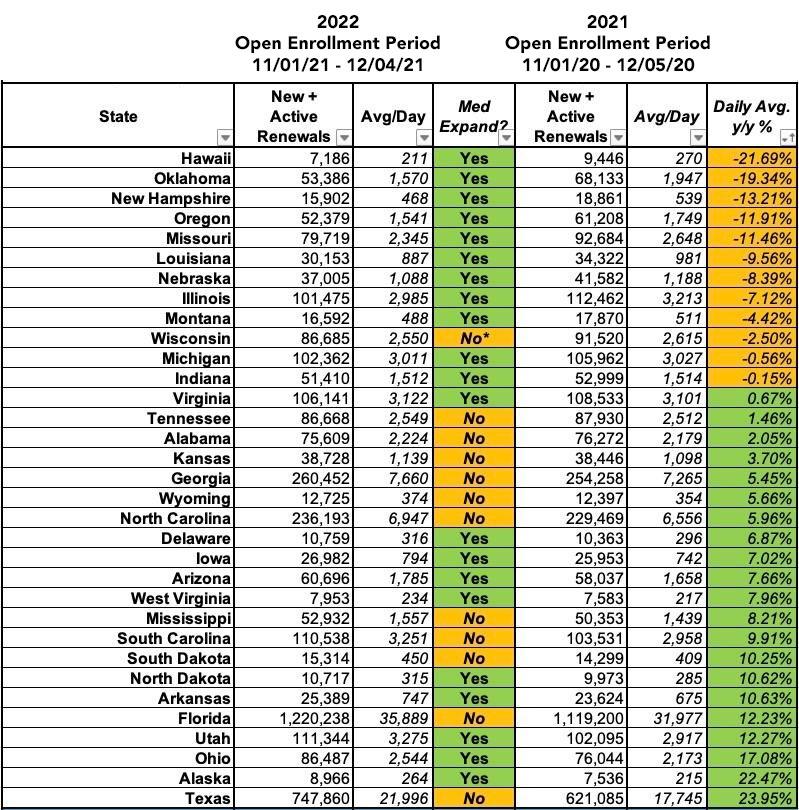 In fact, 21 of the 33 HC.gov states are up vs. last year so far...including 11 of the 12 states which haven't expanded Medicaid. That's hardly a coincidence, either: In those 12 states, people who earn between 100 - 138% of the Federal Poverty Level would be eligible for Medicaid if their states had expanded the program, but since they haven't, this population is instead eligible for $0-premium ACA policies thanks to the American Rescue Plan.

As for the 12th non-expansion state, that's Wisconsin, which is a special case: They didn't officially expand Medicaid eligibility all the way up to 138% FPL, but they did expand it to 100% FPL years ago; the 100 - 138% crowd has already been eligible for ACA exchange plans all along.

Overall, as you can see above, the 12 NON-expansion states have seen enrollment increase by 12.3% vs. last year so far, while the 21 Medicaid expansion states on the federal exchange are actually down slightly (by 1.2%) vs. the same point a year ago.

As for the 12 HC.gov states which are behind last year, 5 of them are down by double digits: Missouri, Oregon, New Hampshire, Oklahoma and Hawaii, the last of which is down nearly 22% year over year. Missouri and Oklahoma's drop was expected; both states expanded Medicaid a few months ago, which means their 100 - 138% FPL residents are shifting over to Medicaid for 2022 instead.

I have no idea what's going on in Oregon, New Hampshire or Hawaii, however.

The press release also breaks out the auto-renewals for most of the SBMs; again, I haven't included them above because it's too difficult to run a year over year comparison vs. last year for those. The three states which split off from HC.gov are noted in grey.

For Colorado, the CMS press release doesn't include auto-renewals, but Connect for Health Colorado issued their own press release a few days ago reporting total enrollment of ~158,000, which means the auto-renewal figure is likely around 112K: 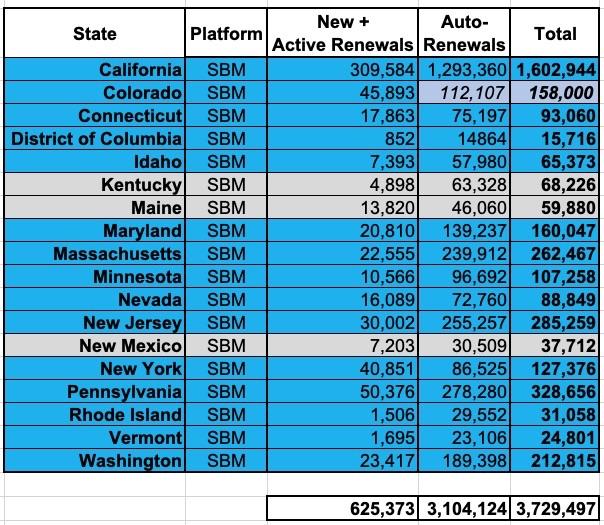 When you add the 3.1 million auto-renewals to the mix you get a grand total to date of:

It's worth noting that for HealthCare.Gov states only: