The "final" OEP numbers are gonna be a little fuzzy in some state-based exchanges this year, of course. Several states had OEP deadlines which extended past the federal one as usual, including some which didn't end until January 31st. Due to the ongoing COVID-19 pandemic, however, several of those states went gone ahead and bumped their deadlines out further yet, through as late as March for Maryland and New York.

Then last week, of course, the Biden Administration announced that HealthCare.Gov is re-opening enrollment for a full three months starting on February 15th, and a bunch of state exchanges scrambled to announce their own additional re-openings or extensions...some of which already overlapped with those 1/31 deadlines.

As a result of all this, which QHP selections get "counted" as part of the official 2021 OEP and which will be considered SEP enrollments might vary depending on the state.

In the case of Washington State, however, they clearly ended Open Enrollment as scheduled on January 15th, and their COVID Enrollment Period doesn't kick in again until February 15th, so the numbers in their just-released report are indeed official:

It's hard to read, but basically the uninsured rate in Washington State was around 6.2% just ahead of the COVID-19 pandemic. Over the next few months it shot up to over double that as hundreds of thousands of people lost their healthcare coverage, peaking at 12.6% as of late May; after that, it started dropping back down again thanks to Medicaid expansion, ACA exchange Special Enrollment and some businesses starting to re-open, among other measures. By mid-December, the WA uninsured rate was back down to 6.4%...nearly the same as pre-COVID levels.

It's important to note that "Applications" and "Determined eligible for QHPs" are not the same thing as the total number who actually select a plan. 277,506 WA residents were "determined eligible" for enrolling in a private exchange plan, but only 80% of them actually completed the enrollment process (and even then, not everyone completes the final step of paying their first monthly premium to get effectuated, as shown later). 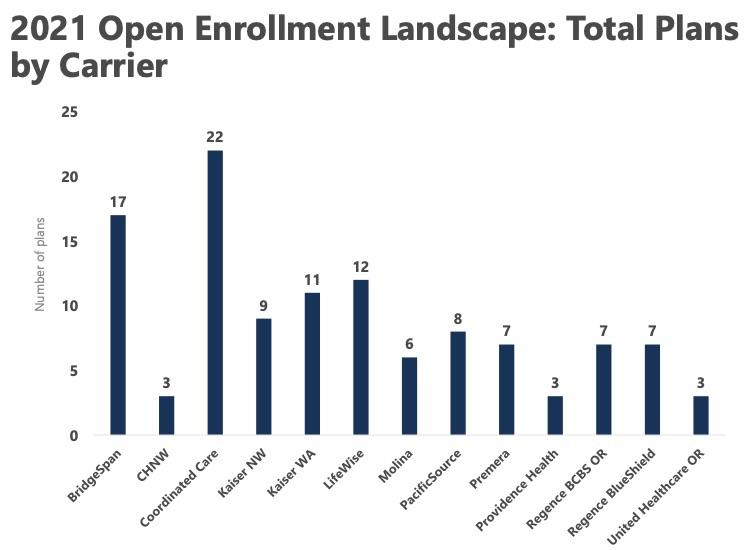 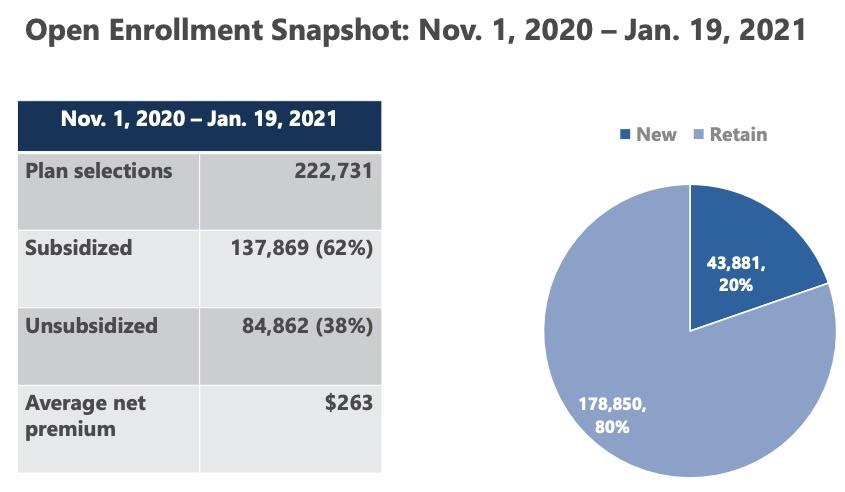 There it is: 222,731 total QHP selections. Technically Open Enrollment ended on 1/15 in Washington, but they tacked on an extra four days for unknown reasons.

62% of enrollees being subsidized is quite a bit lower than the national average, which usually hovers around 83% or so...but this was true last year as well (in 2020, only ~60% of WA enrollees were subsidized). I don't know if this is due to WA residents being higher income than average or what. 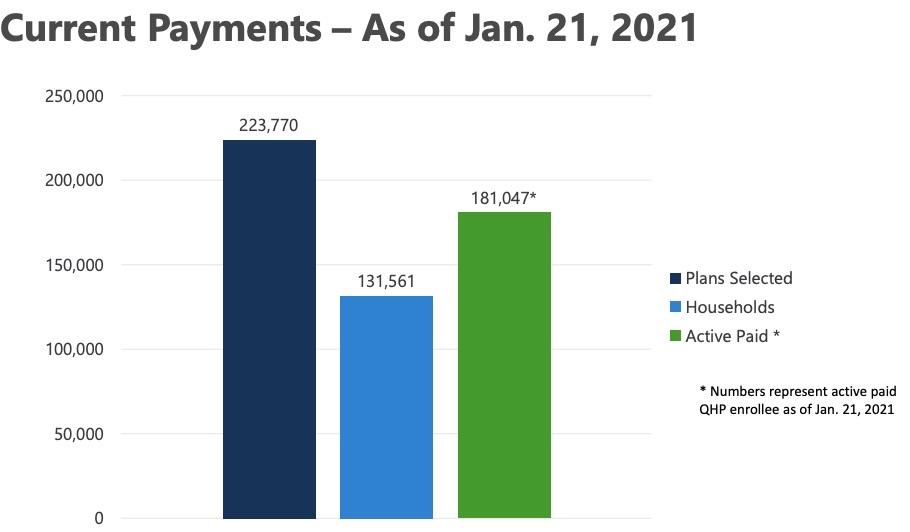 As of 1/21, only 81% of WA exchange enrollees had paid their first monthly premium...but again, coverage for the last batch of enrollees didn't start until February 1st; the odds are this percentage has increased somewhat since then. Again, the national average is usually around 90% or so. 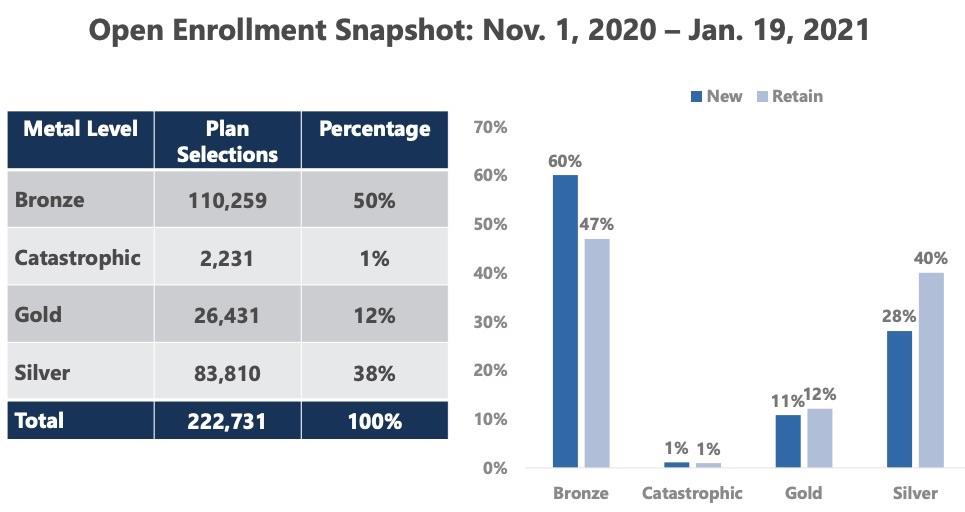 Interesting: New enrollees were much more likely to pick Bronze plans this year. I'm assuming this is due to a combination of Silver Loading and reduced incomes, but could be wrong. 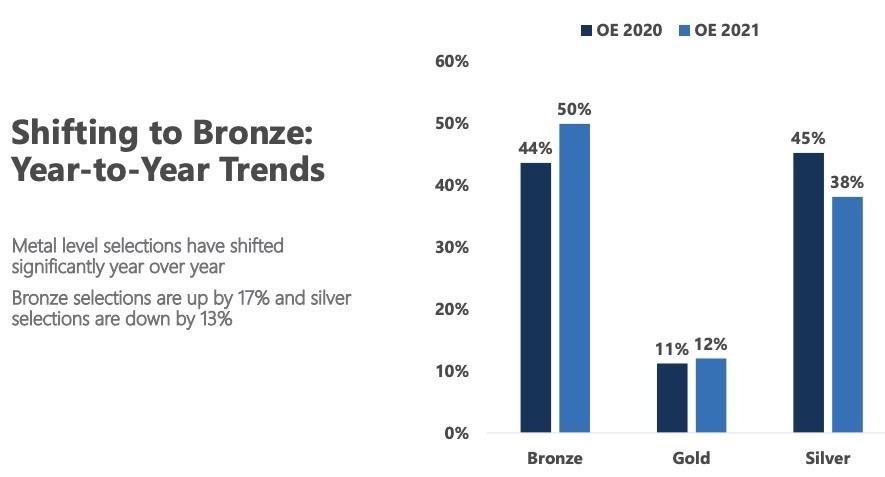 Again, I don't know if this is due to Silver loading, reduced incomes or both, but it's a pretty stark change. 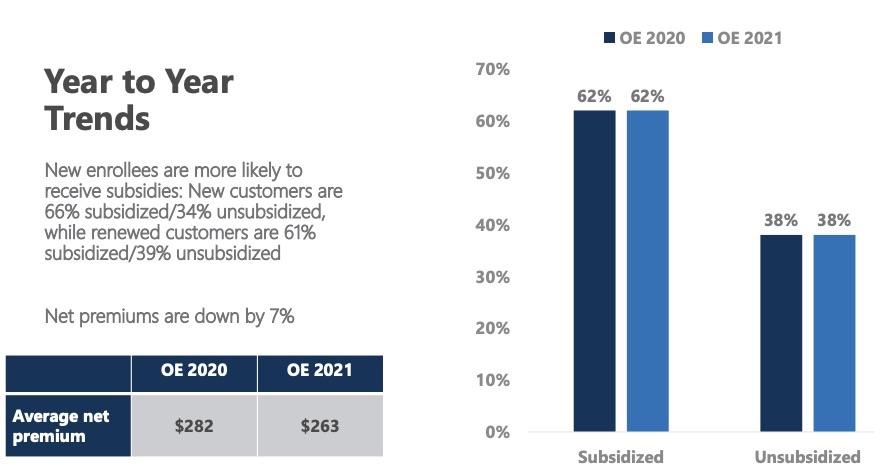 If more people shift to Bronze plans, it makes sense that the average net premium will drop a bit, especially when combined with Silver Loading. Note that officially, unsubsidized premiums only dropped 3.2% in WA this year. 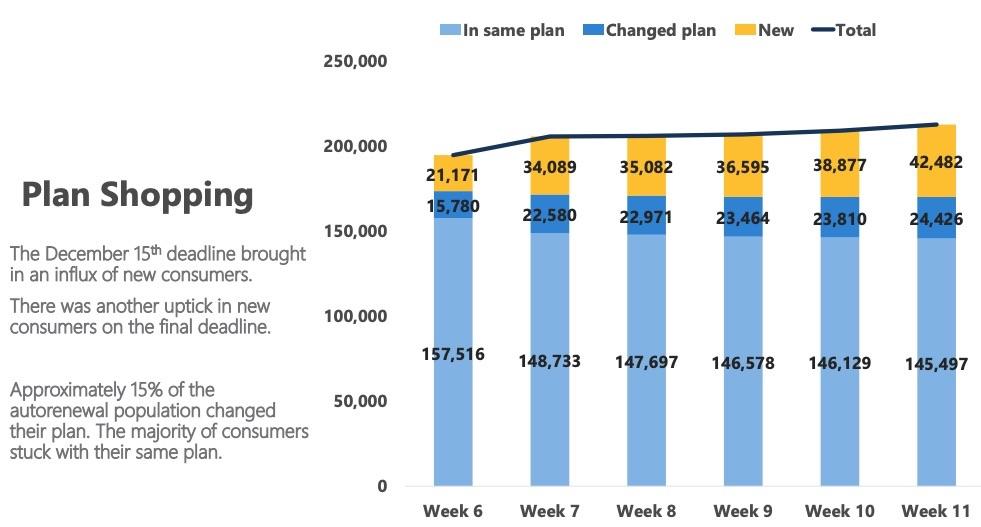 I'd have to see previous yearly data on this to know whether this is noteworthy or not.

Annnnnd there you have it: A few weeks ago I speculated that the reason the WA PlanFinder wasn't breaking out how many Public Option "Cascade Care" enrollees there are is likely because the number is very low. 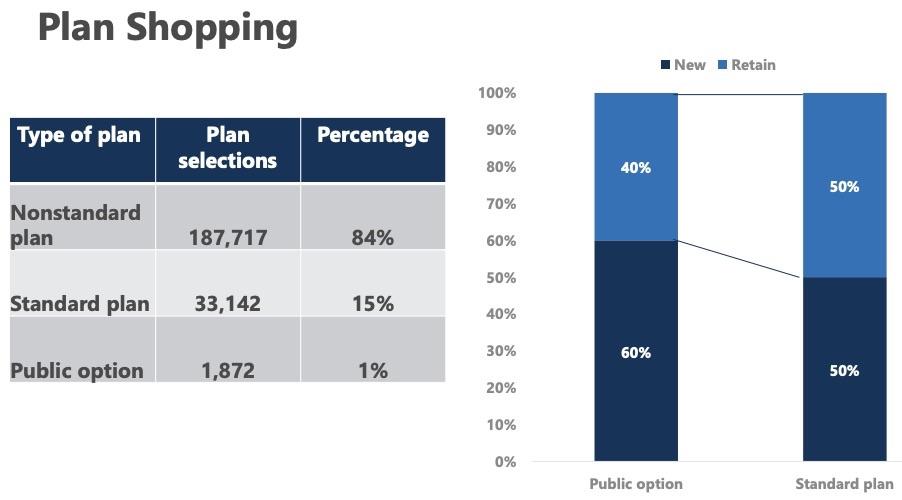 When you include all plans, the Public Option number is either better or worse, depending on your POV: Nearly 1,900 people chose a PO plan total, which means 758 current enrollees switched to a PO plan. However, out of over 220,000 enrollees, that's less than 1% (0.84% to be precise).

On the other hand, people tend to be very "sticky" with their insurance coverage unless they're really unhappy with it, so perhaps this is an unfair measurement. The 2.5% figure (3% according to WA PlanFinder) is probably a better benchmark. 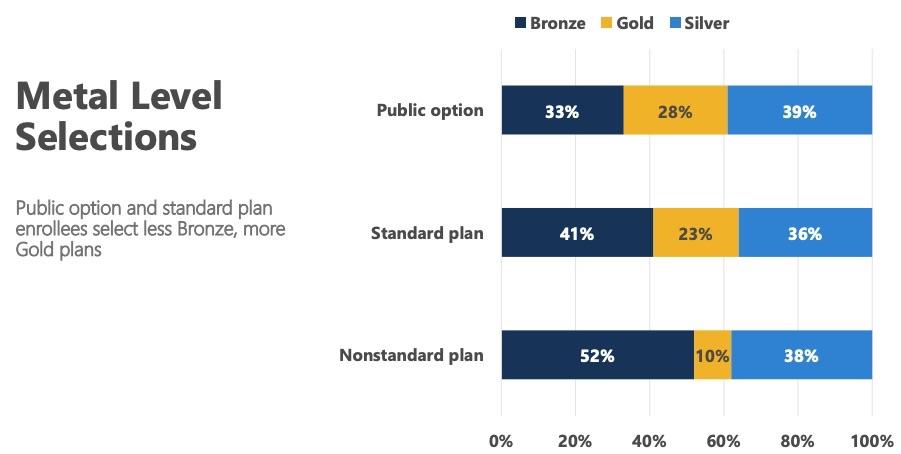 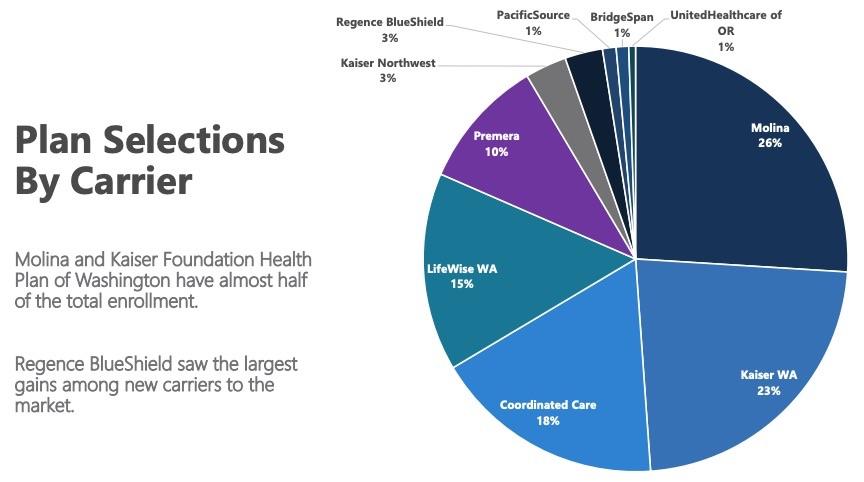 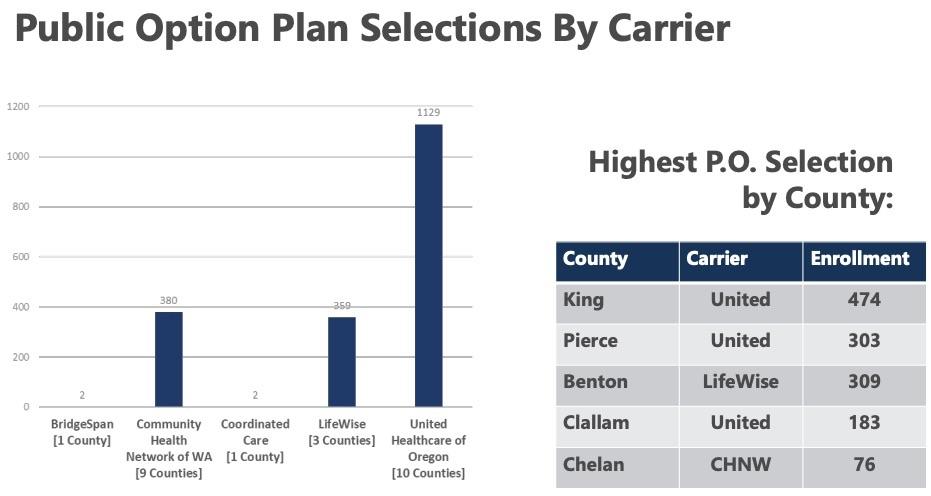 Honestly, with only 1,900 people choosing a PO plan total, and the fact that some PO plans are only available in a few counties while others are available in up to 10, I'm not sure how useful this data is. 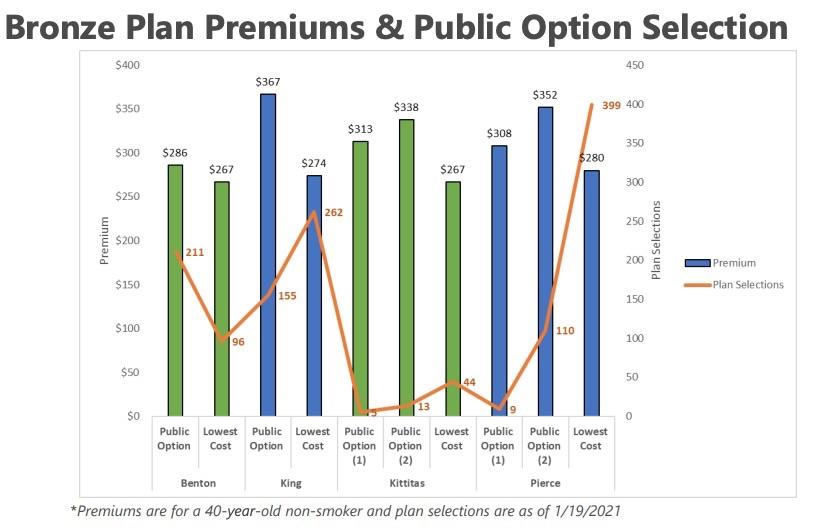 This likely cuts to the core of the problem with Washington State's new Public Option plans: Currently, they simply aren't all that competitive when compared with private plans, which cuts to one of the primary reasons for having a Public Option in the first place.

As I noted a few weeks ago:

As I noted in one of my first posts about the WA PO back in April 2019, most people are under the impression that a Public Option will pay doctors and hospitals Medicare rates, thus automatically undercutting private insurance by 30-40%. Voila! You've cut the cost of healthcare by a third! However, it doesn't work that way. Those doctors, hospitals, drug companies and medical devicemakers still have to agree to contracting with the government...and getting them to agree to a 1/3 cut in revenue is a steep hill to climb.

This is exactly what happened when the WA PO bill was passed through the state legislature. The original version was supposed to pay Medicare rates, but as the sausage-making process continued, it increased to 120%, 140%, 150% before finally settling on 160% of Medicare rates. Even then it still included a clause which allowed the director (I don't know if this would be the insurance commissioner or who?) to go beyond that. As a result, in the end, Washington's Public Option plans aren't necessarily that much less expensive than the rest of the offerings on the exchange.

In fact, judging by the chart above, it's even worse than that: In all four of the four counties shown, the Public Option Bronze plans are actually more expensive than whatever the lowest cost Bronze plan available on the exchange is.

This is a real problem which the WA legislature is going to have to tackle going forward...which is exactly the subject of Part 2 of my Washington State 2021 Open Enrollment analysis coming soon!