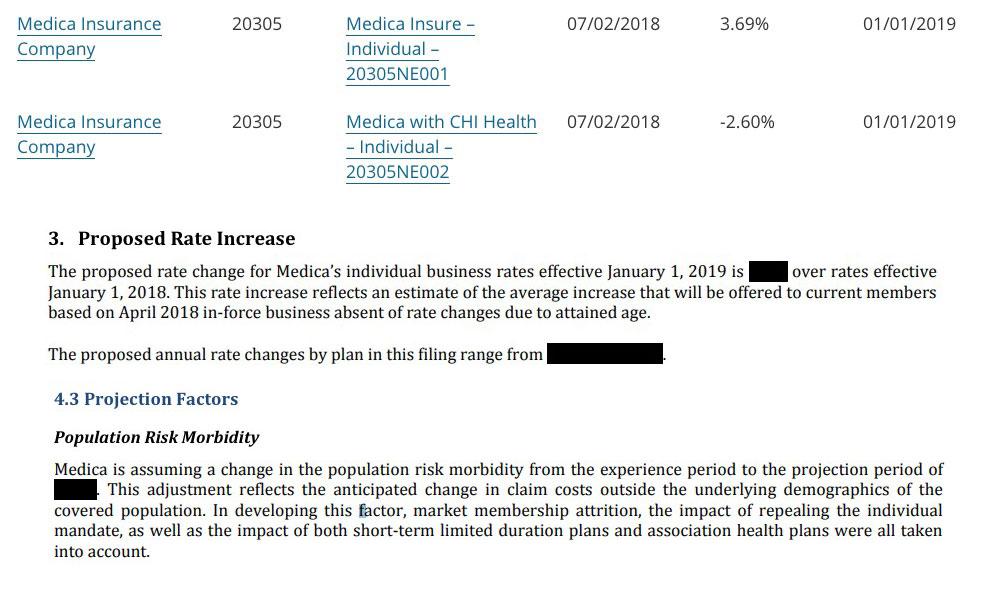 Mississippi: Preliminary 2019 #ACA rate hikes: FLAT, but would likely have DROPPED ~10% without #ACASabotage

Mississippi is pretty easy: Only two carriers. I have no idea what their relative market share is (the enrollment data along with a lot of other stuff is redacted in their filings), but in this case it really doesn't matter because both of the carriers are requesting nearly identical rate changes anyway...which is to say, just about no change whatsoever.

The Urban Institute projected that #MandateRepeal and #ShortAssPlans would add a 17.2 percentage point rate hike factor in Mississippi. I generally knock 1/3 off of their estimates to err on the side of caution (11.4%), but given Ambetter specifically stating that they didn't add any increase to account for #ShortAssPlans (why?? interesting!), I'm shaving off a bit more and assuming a flat 10% impact.

This means that unsubsidized Mississippi enrollees would likely have saved a good $800 apiece next year without Trump/GOP efforts to undermine the ACA this year.

Illinois has the same four ACA indy market carriers participating next year as they do this year. All four rate filings specificlaly call out Mandate Repeal and #ShortAssPlans as significant factors in their rate requests, but none of them break out the actual amount, so I'm relying on my standard assumption of 2/3 of the Urban Institute's projections.

I should also note that only one of the four carriers (Health Alliance) specifies just how many enrollees they have; for the other three I'm basing my estimates on last year's numbers for now. The two carriers with what I assume are still the largest market share (BCBS and Celtic) are basically keeping rates flat year over year, while the other two are 7.5% and 10% apiece, for an average rate increase of just 0.7% statewide.

Unsubsidized Illinois residents are currently paying $644/month on average, so a 12.9% sabotage effect means that each of them will have to pay nearly $1,000 extra next year. Ouch.

Idaho's insurance department website displays their annual rate filing summaries in a unique way--they don't publish the actual enrollment numbers, but they do post breakouts of the rate hikes for different metal levels (handy!) as well as the premiums brought in and claims paid out, which gives some refreshing insight into just how profitable (or not) some fo the carriers are (if I'm reading the screenshot correctly, it looks to me like BCBS and Mountain Health did just fine last year, but the other three carriers ended up in the hole (especially SelectHealth...ouch).

The state website also claims the overall weighted averge rate increase being requested in 8% even though my own spreadsheet brings it in at 9.4%. This could be due to my misestimating SelectHealth's enrollment number, or it could be because Regence Blue Shield cays they're raising rates 3.9% but the state claims it's 7% (although that should actually result in a higher average from the state, not lower...)

Arkansas: Preliminary 2019 #ACA rate hikes: 4.5% INCREASE, but would have DROPPED by up to 8% w/out #ACASabotage

Arkansas has three carriers offering ACA individual market policies, but one of them is kind of/sort of split into two separate entities (QualChoice and QCA). Unfortunately, most of the key actuarial memo content has been redacted, so I'm missing data on market share for three of the four entries--Ambetter/Celtic is the only one which states outright their current enrollment number. For the other three I had to estimate based on last years data. For QCA and USAble (which is actually Blue Cross Blue Shield, for some reason), I had to sort of split the difference between the different entries to get the overall requested rate increases.

In terms of #MandateRepeal & #ShortAssPlans, the Urban Institute projected an 18.8 percentage point impact. 2/3 of that is 12.5%, so I'm estimating that without those factors, average unsubsidized Arkansas rates would be dropping by around 8% next year.