What made me think about this possibilty? Well, if you look at the 28 states which have submitted preliminary 2019 rates so far, the thing which sticks out in my mind is that there's only 8 states seeking double digits, and New York's 24% is the second highest in the country (right below Maryland)...both with and without the mandate penalty in place.

...If that's what happened, then his move today makes sense. He'd be able to score political points ("See? Cuomo is fighting to keep our rates low!") by taking credit for something which was already going to happen anyway.

Well, sure enough, that's exactly what appears to have happened today:

In the face of a sustained attack by the federal government on the Affordable Care Act (ACA), Financial Services Superintendent Maria T. Vullo today announced that the Department of Financial Services (DFS) has reduced health insurers’ 2019 requested rates for New York’s individual market by 64% overall for individuals, saving consumers $314 million. DFS also reduced requested rates for 2019 small group plans by 50%, saving small businesses $279 million. Nearly 1.4 million New Yorkers are enrolled in individual and small group plans. New York was one of the first states in the nation to implement its own health insurance exchange under the ACA. Since then, New York has cut the uninsured rate in half from 10% to 5% and premiums in the individual market have remained more than 55% lower after adjusting for inflation and before the application of federal tax credits.

“New York has been a national leader and steadfast supporter of the Affordable Care Act since the law’s passage and today’s announcement marks the continuation of the state’s efforts to take all actions necessary to protect access to affordable healthcare for all New Yorkers and ensure a stable market in the face of unjustified federal attacks,” said Financial Services Superintendent Maria T. Vullo. “These rate decisions reflect New York’s robust market in the face of federal attacks and increased healthcare and pharmaceutical costs. DFS will not allow the federal government’s wrongful repeal of the individual mandate penalty to become a self-fulfilling prophecy to make health insurance unaffordable in New York. DFS has carefully examined the rates requested by health insurers and scrutinized every factor from an actuarial and market standpoint to ensure that the Trump Administration’s many efforts to sabotage affordable and comprehensive healthcare coverage do not allow insurers to unfairly profit at the expense of consumers.”

...The ACA required consumers to purchase insurance or pay a penalty unless they qualify for a limited number of exemptions. While the mandate remains in the ACA, the recent federal 2017 Tax Cut and Reform Bill eliminated the individual mandate penalty for not having health insurance effective January 1, 2019. Given this recent timing, the present impact of the repeal of the individual mandate is uncertain.

...In addition, New York has banned short-term plans, in contrast to a recent Trump administration rule that promotes such plans. Short-term plans do not include crucial consumer protections, and would allow insurers to deny coverage for preexisting conditions, impose annual and lifetime benefit limits even for the seriously ill, and allow insurers to discriminate against the sick by either charging them more or refusing to sell them coverage altogether. New York’s prohibition on short-term plans further ensures that New York’s ACA markets maintain stability.

...Approximately 330,000 New Yorkers are currently enrolled in an individual commercial plan. DFS reduced insurers’ total weighted average increase requested for individuals by 64%, from 24% to 8.6%. These rates will be further reduced for many consumers due to federal tax credits. For example, overall average 2019 cost of coverage for individuals who purchase the second lowest cost silver plans on the New York State of Health will increase by only about 2.7% compared to 2018 rates for some individuals when federal tax credits are applied.

Rates for individuals are more than 55% lower than prior to the establishment of the NY State of Health in 2014, adjusting for inflation but not counting federal financial assistance that the ACA makes available to many consumers purchasing insurance.

Here's the actual approved individual market rate changes, along with the original requested rate changes both with and without the Mandate Repeal factor baked in:

In a statement, the New York Health Plan Association is not pleased.

Yes, I imagine they aren't. Not only did the state DFS strip away all of the "mandate repeal" increases, they went even further and lopped off a chunk of the non-sabotage rate increases as well for most carriers.

How much of this is justified? How much is playing politics? I'm not an actuary. I have no clue.

What I do know is that barring any additional surprises or more dramatic changes (Carriers pulling out? Surprise Mandate Reinstatement legislation? Health plan association suing the state DFS?), this means that officially, I can change New York's 2019 Rate Hike entry from "12.1% without sabotage / 24.0% with sabotage" to "8.6%, no sabotage impact allowed for", which is admittedly a rather novel approach to dealing with the problem... 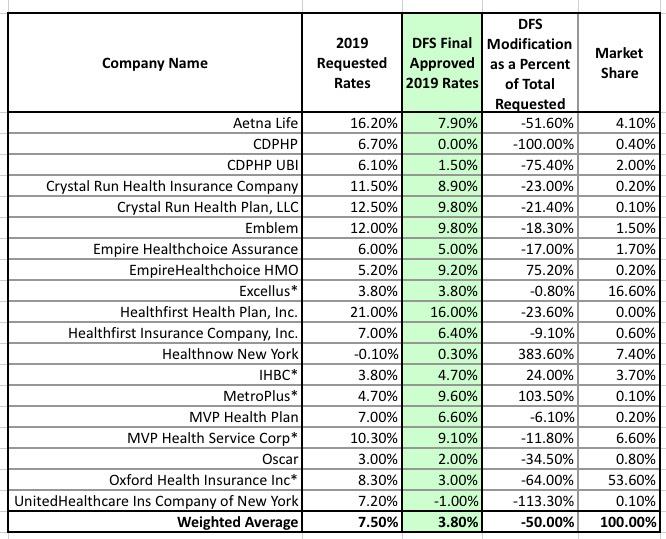