Unfortunately, I only have a hard county-level number for Fairfield County (31% of the total). For the other 7 counties in the state, I based my estimates on their proportion of the total state population; I also did this for the Medicaid expansion estimates. This is obviously imperfect, but it's the best I can do for the moment. 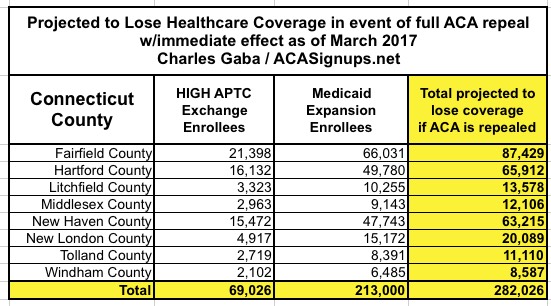 For the Congressional District breakout, the Kaiser Family Foundation had all 5 counties estimated at the exact same number of exchange enrollees. Since Fairfield County is located in the 4th CD, I bumped theirs up a bit and made the other 4 even. Again, imperfect but the best I can do at th emoment.