I've actually had the county-level high-subsidy exchange enrollment numbers for a couple of weeks now; the reason for the holdup was on the Medicaid expansion side. Until recently I was under the impression that MA had already expanded their Medicaid eligibility beyond the ACA's 138% FPL threshold anyway, and that therefore there weren't any MA residents enrolled specifically due to the ACA. However, it turns out that I was very, very wrong about this. According to this January 2015 MassLive article, at least 190,000 Baystaters would indeed be kicked off of Medicaid ("MassHealth") if the ACA were to be repealed. The confusion was caused by both Massachusetts' "Commonwealth Care" program (from which most of the expansion enrollees were transferred as well as a special MassHealth program that tens of thousands of residents were enrolled in temporarily for much of 2014 due to the massive technical problems which riddled their original ACA exchange website during the first open enrollment period.

In any event, the true number of expansion enrollees is likely somewhat higher than 190,000 (remember, that number was from over 2 years ago), but it's the best I can do for the moment; I'll update the tables as appropriate if I get ahold of more recent data.

Nearly 265,000 Baystaters signed up for ACA exchange policies this year, but only about 75% of them received federal tax credits (lower than the 85% national average). Once you knock off 10% for non-paying enrollees and another 10% for "lightly" subsidized folks, that leaves around 161,000 who are actually in serious jeopardy. Add these to the 190,000 Medicaid expansion enrollees and that's over 350,000 people.

Unfortunately, as in a few other states, I don't know what the county-by-county breakout of the Medicaid numbers are, so I'm keeping them proportional to the high-subsidy exchange figures, on the assumption that there's likley a similar ratio of residents at the <138% FPL level as the 138-400% FPL level. Again, if someone provides me better data for this, I'll be happy to revise the tables.

As for the Congressional District breakout, Massachusetts oddity is that the Kaiser Family Foundation analysis has all 9 Congressional Districts having the exact same number of exchange enrollees as of last March. Obvoiusly this isn't the case. KFF rounded each county off to the nearest 100, but it still seems unlikely that all 9 within the state would be that close (within +/- 50 people) regardless of the demographic/income similarities. However, in the absence of any other data sources, I have to use that as my basis...so as a result, my own estimates of both high- subsidy exchange enrollment and Medicaid expansion enrollment are also identical for each of the 9 CDs. Once again, if you have better data, pass it along and I'll update the tables, but in the meantime, this should be pretty close. 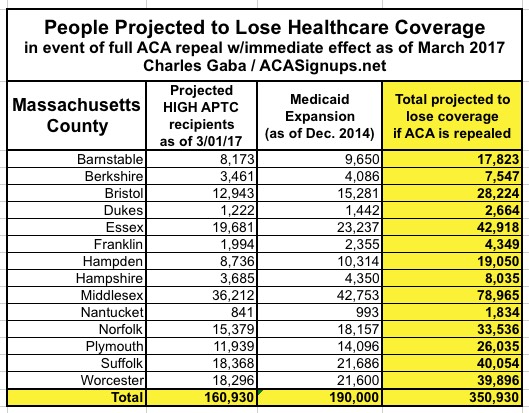 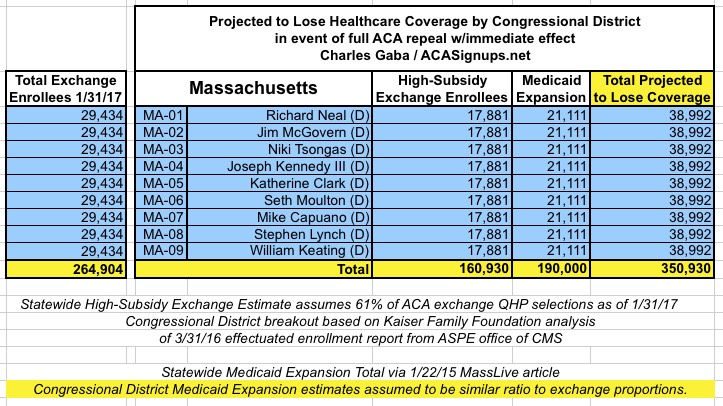