California: Here's the ~4.9 MILLION residents who could lose coverage, by COUNTY and CONGRESSIONAL DISTRICT!

IMPORTANT: This is my county-level estimate for California. The congressional district breakout will be following soon.

Regular readers know that I started out the "How Many Could Lose Coverage..." project at the state level, then moved into analyzing the county-level data, before finally tackling the hardest challenge: Breaking them out by Congressional District.

The state level table includes all 50 states (+DC), while I managed to break out the county level data for 34 states so far before moving into the Congressional District analysis by popular demand. There, I've managed to crunch the numbers for 43 states so far.

The reason I haven't gotten to either the County or CD level for many states is a combination of lack of time and lack of data. I have the exchange enrollment figures as of last winter at the county level for all of the states handled by HealthCare.Gov, but getting this information for the state-run exchanges has proven trickier; some release the county breakout, some don't.

In the case of California, I haven't been able to find the county-level data for all 2016 enrollees...but I was able to cobble this together based on two other reports:

There are slight variances between the two (a given county might include 2.5% of total enrollment in 2014 but only 2.3% of new enrollment in 2016), but nothing major. These are rough estimates anyway, and the statewide total is a known quantity, so each county figure should be pretty close to the exact number regardless.

Medicaid expansion was a different story. I haven't been able to hunt down any county-by-county breakouts of the Medicaid expansion numbers (over 3.8 million people!), and while the CA Dept. of Healthcare Services does provide various Medicaid enrollment reports by county (PDF), they don't distinguish between traditional Medi-Cal and those enrolled via ACA expansion. Since the income/demographics of the two populations are so different, that didn't seem like it would be close to accurate.

Instead, I decided to take a simpler route: I broke the 3.84 million figure out based on the total population of each county. Again, it's possible that this isn't accurate due to variances in income demographics and other variables between the counties, but it's the best I can do. If someone is able to provide me with more accurate figures, I'll be happy to revise the table.

That being said, here's my best shot at estimating how many are at risk of losing coverage in California by county in the event of a full/immediate repeal of the ACA without any immediate replacement plan:

IMPORTANT: Also note that unlike the statewide estimate table, in my County and CD breakouts I don't include the "Young Adults on their Parents' Plans" estimates since those estimates are far more questionable and harder to break out into county/CDs anyway. In the case of California, I estimated as many as 435,000 people could fall into this category, but if I'm not including them for other states, I shouldn't include them for California either. Therefore, while my CA estimate on the state-by-state table is 5.3 million, it's "only" 4.9 million here: 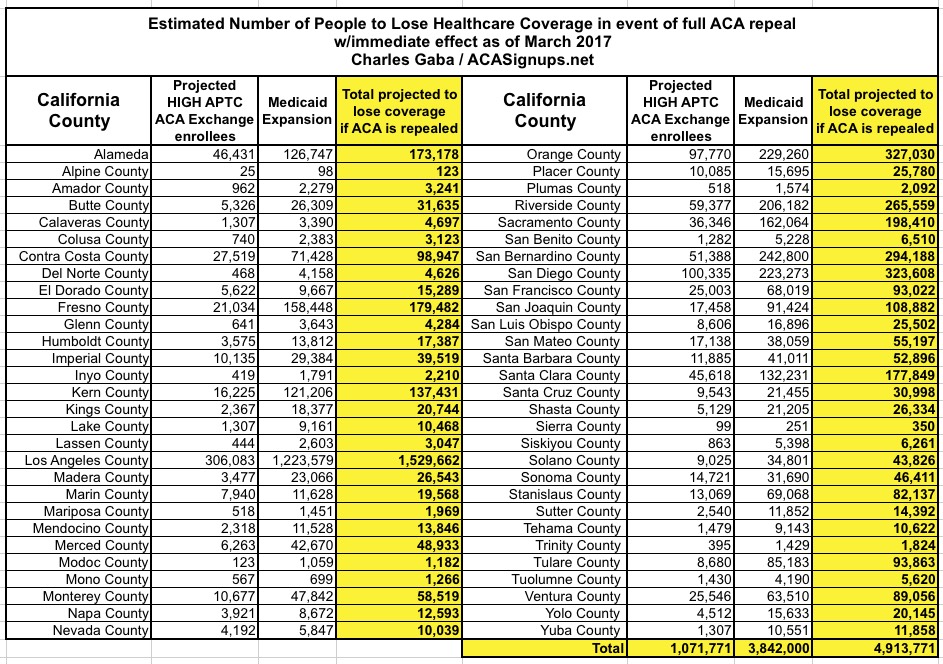 UPDATE 2/17/17: Eureka!! A huge shout-out to Mercury News healthcare reporter Tracy Seipel for pointing me towards this report by Health Access of California (PDF), who went through the state's CoveredCA and Medi-Cal expansion data and broke both numbers out by Congressional District already back in early January!

I had to make some minor adjustments to their data for two reasons: First, because their numbers are about 6 months out of date (Medi-Cal expansion has increased by an additional 194,000 people since last July); second, because while they include all exchange enrollees receiving tax credits, I knock off an additional 10% to account for those only receiving nominal subsidies.

Aside from that, this report made the rest of the job a snap...and so, I can finally add California to the Congressional District breakout archive: 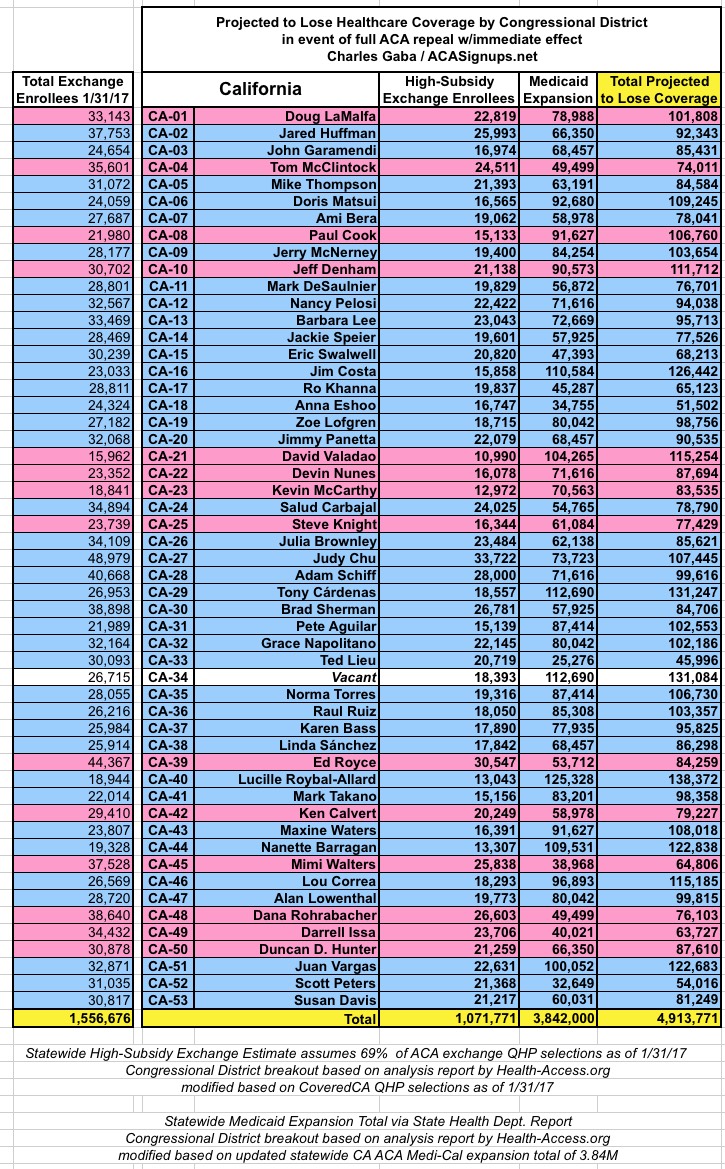