A month ago, I made what seemed to be a reasonable prediction based on the data available at the time:

...I completely forgot to mention BASIC HEALTH PLAN (BHP) enrollment in New York and Minnesota. It totalled 975,337 people during the 2021 OEP (883,451 in New York, 91,886 in Minnesota)...I'm willing to bet total BHP enrollment across both states will end up perhaps 10% higher year over year, which would put it at around 1.1 million.

When you add that to my QHP projection above, you get a grand total of perhaps 14.1 million QHPs + BHPs combined.

If this projection had proven accurate, it would have meant total ACA exchange enrollment was up ~9 - 10% year over year, which would have been impressive but not stellar.

Well, it looks like I lowballed things a bit:

During the Open Enrollment Period, to date, approximately 9.7 million people have selected individual market plans or were automatically re-enrolled in a plan through HealthCare.gov.

HOWEVER, as noted above, KY, ME & NM all split off onto their own ACA platforms this year, which means they have to be subtracted from the 2021 OEP total...HC.gov enrollment is actually up 20.7% vs. the same point last year...with a solid 6 weeks of enrollment data left to go.

Yup. Enrollment across the 33 states hosted on the federal ACA exchange platform at HealthCare.Gov are nearly 21% higher than they were at the same point a year ago, and there's still likely several hundred thousand enrollees left to be tacked onto the total.

What about the 18 state-based marketplaces (SBMs), however?

Well, here's where things stand for them (most of these figures are via the CMS report from December 9th; the others are linked to below):

CMS confirmed this in a second, separate press release this morning as well:

All-Time High: 13.6 Million People Signed Up for Health Coverage on the ACA Insurance Marketplaces With a Month of Open Enrollment Left to Go

This year’s Open Enrollment Period is outpacing all previous years, a historic high of more than 13.6 million people already enrolled in health insurance coverage for 2022 through HealthCare.gov and State-based Marketplaces (SBMs). The American Rescue Plan (ARP) has made coverage more affordable and accessible for people across the country: 92% of people in HealthCare.gov states who signed up for plans through December 15, 2021, will receive premium tax credits for 2022 coverage. Moreover, more than 400,000 people will receive tax credits for 2022 coverage, to date, that would have been inaccessible to them prior to the ARP. Since President Biden took office, more than 4.6 million Americans have newly gained health care coverage.

From the start of Open Enrollment through December 15, 2021, more than 9.7 million consumers enrolled in Marketplace coverage in the 33 states using HealthCare.gov for 2022. This is over 900,000 more people than the previous all-time high of 8.8 million who signed up during the 2018 Open Enrollment Period with 39 states using HealthCare.gov. The 18 SBMs that use their own platforms reported to The Centers for Medicare & Medicaid Services (CMS) that through December 11 (week six), almost 3.9 million consumers selected plans or were automatically re-enrolled in a plan for 2022 health coverage. This is up from last year when SBMs reported that 3.4 million consumers made a plan selection in the 15 State-based Marketplaces for 2021, through week six.

Add these to the 9.72 million via HC.gov and you get a grand total of nearly 13.6 million QHP selections to date nationally.

Tack on the million or so BHP enrollees and total 2022 OEP enrollment has already broken 14.6 million nationally. And again, there's still nearly a month left for people to sign up for 2022 coverage in most states. 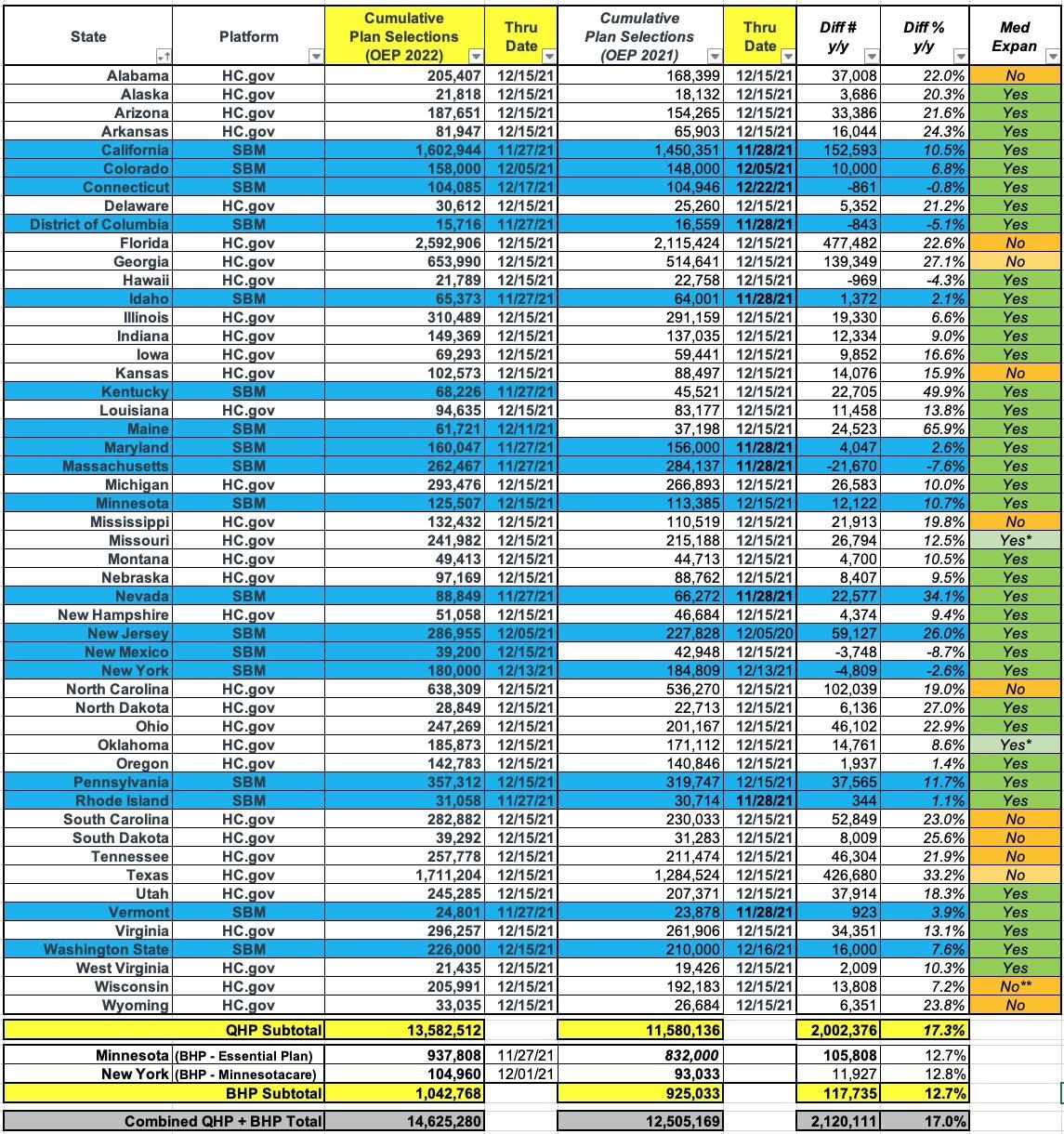 I've compared all 50 states + DC to last year's enrollment figures as of the same date...or as close to the same date as possible in the case of the SBMs, since the dates of their enrollment reports don't always line up perfectly year to year. For last year, I used CMS's 2021 Open Enrollment Public Use File to match up the thru dates as closely as I could.

As far as I can figure, nationally, when you include both QHPs & BHPs, overall enrollment as of mid-December has already broken 14.6 million nationally. That's over 2.1 million people higher than last year as of the same point in time, or up around 17.0% year over year.

And again, there's still nearly a month left for people to sign up for 2022 coverage in most states.

I'm guessing total BHP enrollment will actually break 1.1 million by the end of January 2022, which would put it up 12.8% vs. last year.

Here's what that looks like visually. Again, the green section shows HC.gov enrollment; the blue section is SBM enrollment; the grey section are BHP enrollees; and the dotted lines show what these same figures looked like for the 2021 Open Enrollment Period: 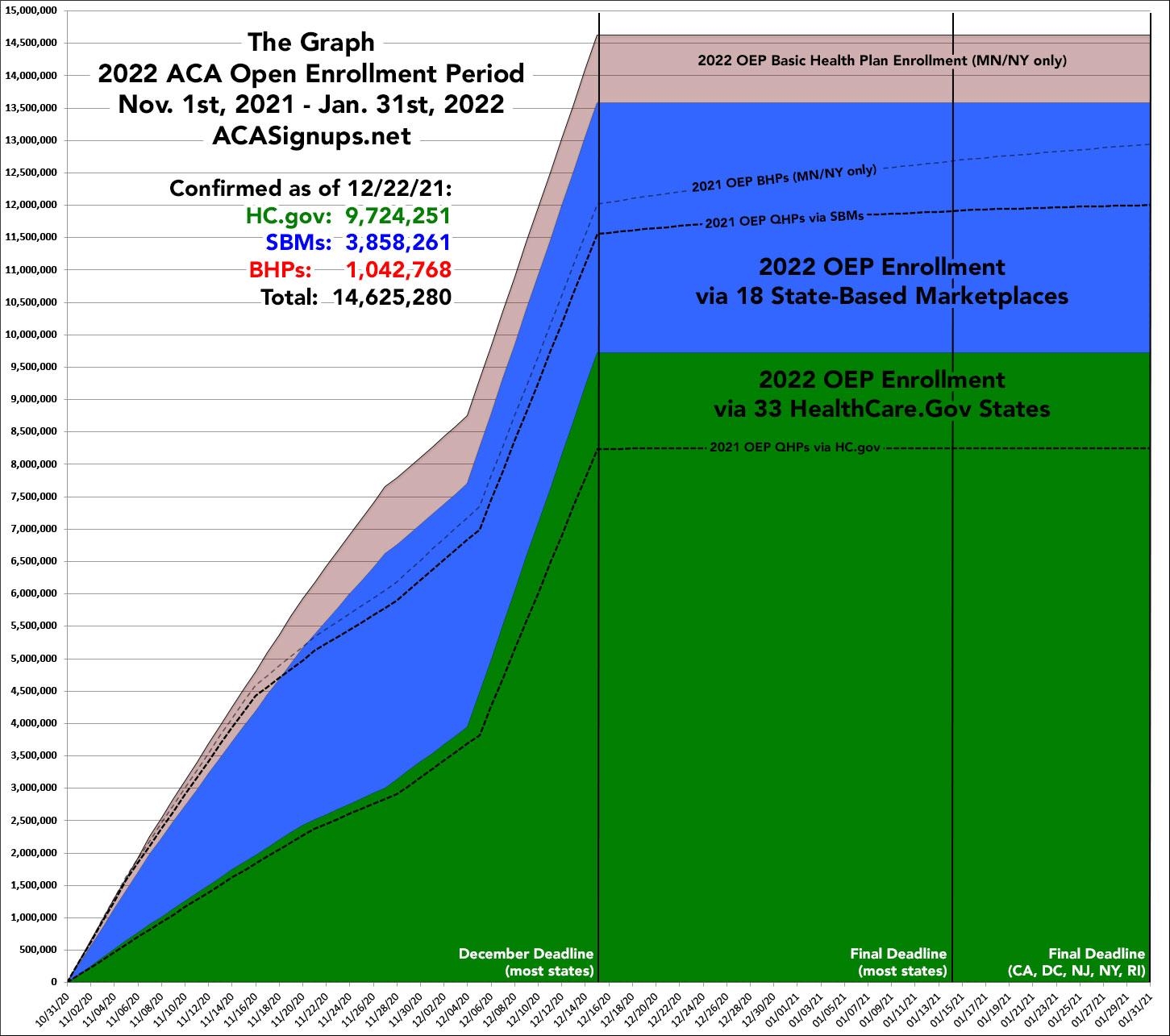 Last year, according to the 2021 CMS Open Enrollment Public Use File, nationally, over 378K more people enrolled between December 16th - January 31st (95% of them enrolled via the state-based exchanges, since the final deadline on the federal exchange had already passed). Only 418K more would have to enroll by 1/31/22 to break the 14M threshold, or just 375K more to break 15M if you include BHPs.