Now that we have two weeks worth of 2022 Open Enrollment data under our belt (well...for 33 states, anyway), I thought this would be a good time for me to try and put together a spitball estimate of how many Americans are likely to enroll in ACA exchange coverage during the 2022 Open Enrollment Period (OEP).

There's really two main numbers to try and project: How many current enrollees will renew/re-enroll for 2022 (whether actively or automatically); and how many new enrollees will jump into the ACA exchanges?

For each of these, due to how the data is reported, I have to further break the states out between those using the federal ACA exchange (HealthCare.Gov) and those which operate their own state-based ACA exchanges (Covered California, NY State of Health, etc.) This is further complicated by the fact that three states (Kentucky, Maine and New Mexico) switched from the federal exchange to their own state-based exchange starting with the 2022 OEP.

Finally, there's also the Medicaid expansion factor. Last summer, both Missouri and Oklahoma voters finally expanded Medicaid under the ACA to all residents earning up to 138% of the Federal Poverty Level...but the actual expansion program in each didn't actually go into effect until this year (July in Oklahoma; October in Missouri, after a long, protracted legislative/legal battle).

MO & OK expanding Medicaid is important because there's a partial overlap in the populations which are eligible for ACA exchange subsidies (100% FPL or higher) and those eligible for Medicaid via ACA expansion (0 - 138% FPL). Any ACA exchange enrollee who earns between 100 - 138% FPL is supposed to be automatically transferred over to Medicaid instead. While it may take some time to process all of the enrollees, the bottom line is that if they earn less than 138% FPL they're not supposed to be eligible for ACA subsidies, which means they should be subtracted from the "ACA exchange enrollee" tally.

Unfortunately, I have no idea how many people are currently enrolled in ACA exchange plans at the moment, but I do have hard data from August thanks to the CBO's final COVID Special Enrollment Period report, which put it at just shy of 12.2 million nationally.

That doesn't mean that 12.2 million people will renew for 2022, however. Some people drop their exchange coverage every month as they get rehired by employers with healthcare coverage, turn 65 and move to Medicare and so forth, so the number of effectuated enrollees in November is likely smaller than it was in August. In addition, some people may be starting a new job/etc. at the beginning of the new year, which means they'll keep their ACA coverage through New Year's Eve but won't renew it for 2022.

I think I can safely conclude that the national renewal total will be somewhere between 88 - 89% of those effectuated as of August, or between 10.7 - 10.9 million.

Next, let's look at new enrollees.

For this, let's compare the first two weeks of the 2022 OEP against the first two weeks of 2021 OEP. I only have this data available for the 33 states hosted via HealthCare.Gov along with Minnesota. (Washington State has released their first weeks total but they haven't separated out new enrollees from renewals, so it's not terribly helpful for my purpose here).

I've already adjusted HC.gov to account for both the missing day (13 days vs. 14 last year) as well as the 3 states which moved to their own exchanges (Kentucky, Maine & New Mexico), the first 2 weeks have come in at around 91.7% of last years new enrollment so far:

In Minnesota, however, new enrollment for the first 2 weeks is actually 21.3% higher (when adjusted for 14 days this year vs. 15 last year).

When I add Minnesota to the other 33 HC.gov states, I get 92.1% of last year's new enrollees for the first 2 weeks:

I have no idea whether the ~8% new enrollment drop will continue for the rest of OEP 2022, of course, but assuming it holds fairly close to the first two weeks (and assuming the other 17 states don't see a dramatic uptick the way Minnesota has so far), that would put 2022 OEP new enrollment at around 92% of 2021's 2.55 million, or somewhere between 2.3 - 2.4 million.

ASSUMING all of this plays out as laid out above, that would give a grand total of between 13.0 - 13.3 million Qualified Health Plan (QHP) selections...minus some number of Missouri & Oklahoma enrollees who earn less than 138% FPL, who should be shifted over to Medicaid instead.

My best estimate is that around 113,000 of those who enrolled during 2021 OEP should fall into this category; between monthly attrition and the COVID SEP, I figure the total to subtract should be at least 100,000 across both states. That would put the national final QHP total at somewhere between 12.9 - 13.2 million people nationally as of January 31st, 2022; call it around 13.1 million.

There's still a lot of other factors, of course. Aside from the obvious (dramatically expanded/improved financial help; beefed-up marketing, outreach & navigator program; the month-long deadline extension) there's also things like the American Rescue Plans' Unemployment Benefit, which is currently only in place for 2021 specifically.

Around 124,000 people took advantage of this across the HC.gov states as of August 15th. When you add in the state-based exchanges and people who utilized the UI benefit via Special Enrollment after that, it's probably closer to 180K. How many of those folks will re-enroll for 2022 given that most of them will no longer be eligible for a $0-premium "Secret Platinum" plan? I have no idea. If a significant number don't, that could knock up to another 100K or so off the total.

On the other hand, the most recent version of the Build Back Better Act would extend the ARP's UI benefit out by one more year...except a) it hasn't even passed the House yet (though it may have by the time you read this), it may not survive in the Senate, and the initial December 15th deadline will likely have passed before President Biden signes BBB into law regardless. A lot of people may end up enrolling after that, but getting the word out will be challenging.

IMPORTANT UPDATE: Speaking of the Build Back Better Act, another massive potential factor is that if it gets passed and signed into law before Open Enrollment ends, that presumably also means that the Medicaid Gap workaround would also go into effect immediately...which means it's conceivable that as many as several million low-income adults in the 12 non-expansion states will immediately become eligible to enroll in ACA exchange plans with subsidies covering ~99% of their medical expenses.

I don't know how long this would take to ramp up, but if that happens it's possible that 2022 Open Enrollment QHP enrollment could reach as high as 14 - 15 million by the time January 31st rolls around.

It's also possible that CMS and/or the state-based exchanges will decide to count this population separately in their enrollment reports, but that doesn't make much sense to me--they're enrolling in the exact same policies (albeit with additional "wraparound benefits") so they should be included in the grand total regardless.

Anyway, I'll revisit this analysis/estimate each week as the latest enrollment numbers come out from both CMS as well as any of the state-based exchanges.

I've already gone this far, so I might as well go further yet and lay out state-by-state numbers using the methodology above. As always, I'll be pleasantly surprised if OEP 2022 enrollment ends up being higher than these estimates! (click below for higher-res version) 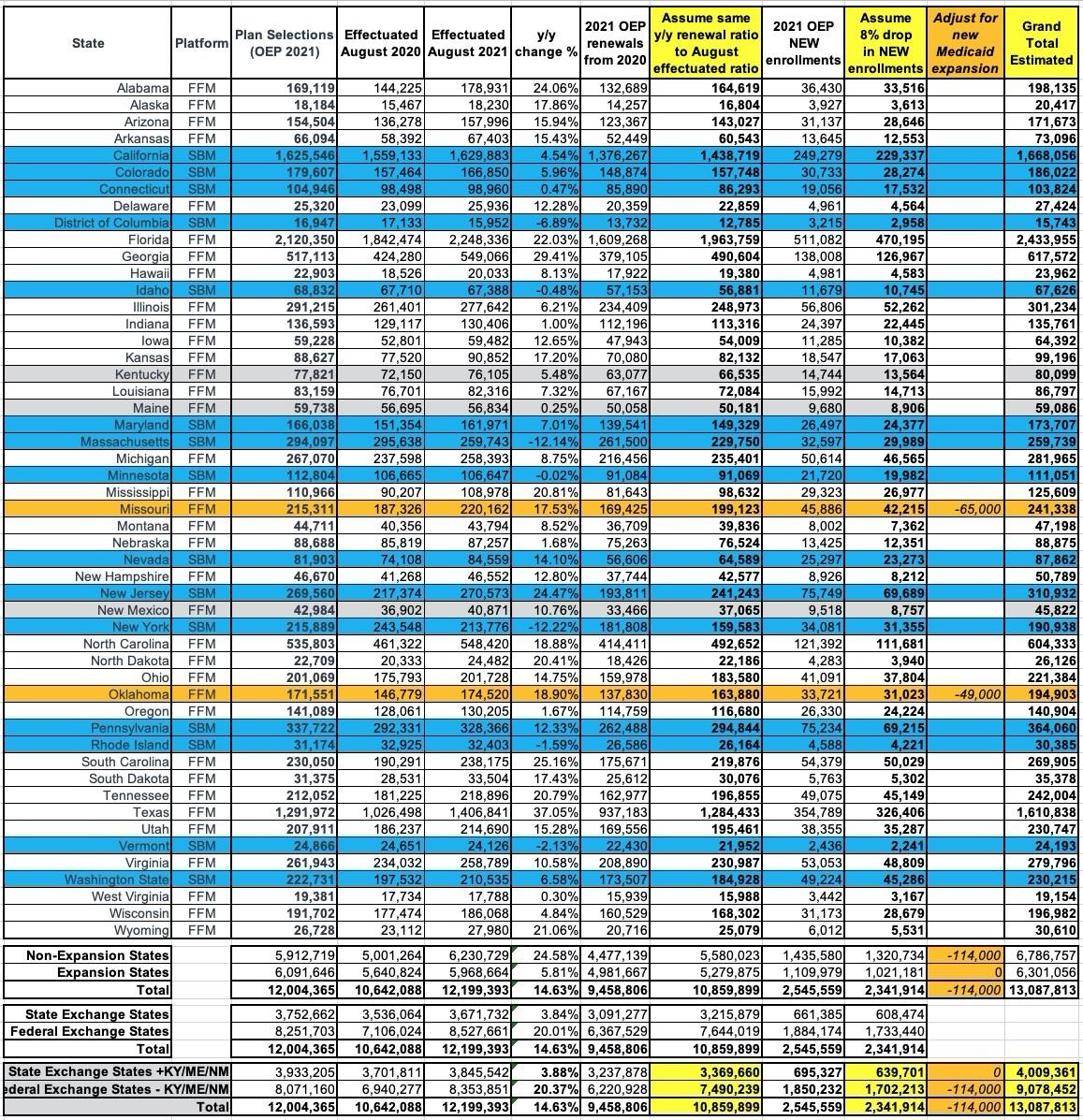 This morning, CMS reported that 937,808 New Yorkers have already signed up for the Essential Plan for 2022 (that's their branding of their BHP program), or 6.1% more than the final 2021 OEP tally...and even that's was only as of November 27th.

I'm willing to bet total BHP enrollment across both states will end up perhaps 10% higher year over year, which would put it at around 1.1 million.

When you add that to my QHP projection above, you get a grand total of perhaps 14.1 million QHPs + BHPs combined.