“These premium reductions will come as a relief to New Mexico’s families and small businesses who are facing economic hardship during the global pandemic,” said Governor Michelle Lujan Grisham. “It is vital that every New Mexican have affordable quality health insurance during a public health crisis.”

“BeWellnm is proud to work with the Superintendent’s office to make sure every New Mexican can find and enroll in health insurance,” said Jeffery Bustamante, CEO of beWellnm. “As we approach November 1, which marks the beginning of open enrollment, I encourage anyone who needs insurance to start looking at what option is best for their budget and lifestyle. Especially right now, health insurance is more important than ever. You can reach beWellnm at 1-833-862-3935 for over-the-phone help or visit www.bewellnm.com for more information.”

Despite the departure of New Mexico Health Connections, the number of insurers competing in New Mexico’s individual marketplace increased from four to five, as new insurers entered the market. OSI released a Frequently Asked Questions resource for Health Connections customers in August and urged all enrollees to actively shop around this year to make sure they find a plan that meets their health and budget needs. The resource can be found at osi.state.nm.us. Health Connections customers who do not sign up for a plan will be assigned to a comparable plan on the marketplace so that they do not become uninsured.

As an aside: I saw a hint of what was coming regarding NM Health Connections back in early July...

While most of the carriers are asking for nominal rate hikes or even a small drop in one case, check out New Mexico Health Connections: They're seeking a whopping 31.8% average rate increase, which is pretty jaw-dropping these days (a huge hike like that was typical in 2016-2018 but I haven't seen a 30%+ hike in the past couple of years). I have no idea what's causing this steep of an increase by NMHC since they redacted their memo, but it's worth noting that they only ended up raising premiums 1.9% last year...after initially asking for a 30% hike then as well. Huh.

...but I somehow never got around to following up on it when the news broke in August that they were going out of business:

The Board of Directors of the New Mexico Health Connections CO-OP has voted to cease operations beginning January 1, 2021. The Board also voted to continue serving members through the end of 2020 to ensure continuity of its current members' health insurance. Members will need to select a new 2021 health plan with another carrier during open the enrollment period, which begins November 1, 2020.

"It is with deep sadness that based on challenging market conditions, the Board made a painful decision to wind down operations of New Mexico Health Connections at the end of this year," said Marlene Baca, CEO & President, New Mexico Health Connections. "Rather than spending resources on next year's uncertain market, we would rather make sure we protect our current members."

That's around 15,000 NMHC enrollees who will have to shop around for a different carrier for 2021, or over 25% of the total NM individual market. This is a damned shame, and it leaves just three of the original Co-Op carriers created by the ACA in business (serving four states).

New Mexico’s 45-day Open Enrollment Period for coverage that starts on January 1, 2021, begins November 1st and ends on December 15th. Most people who purchase coverage on beWellnm.com qualify for financial help to reduce their premiums. Lower income individuals can reduce their out of pocket costs by selecting Silver plans that qualify for Cost Sharing Reductions.

Average premiums in each geographic rating area can be found below. 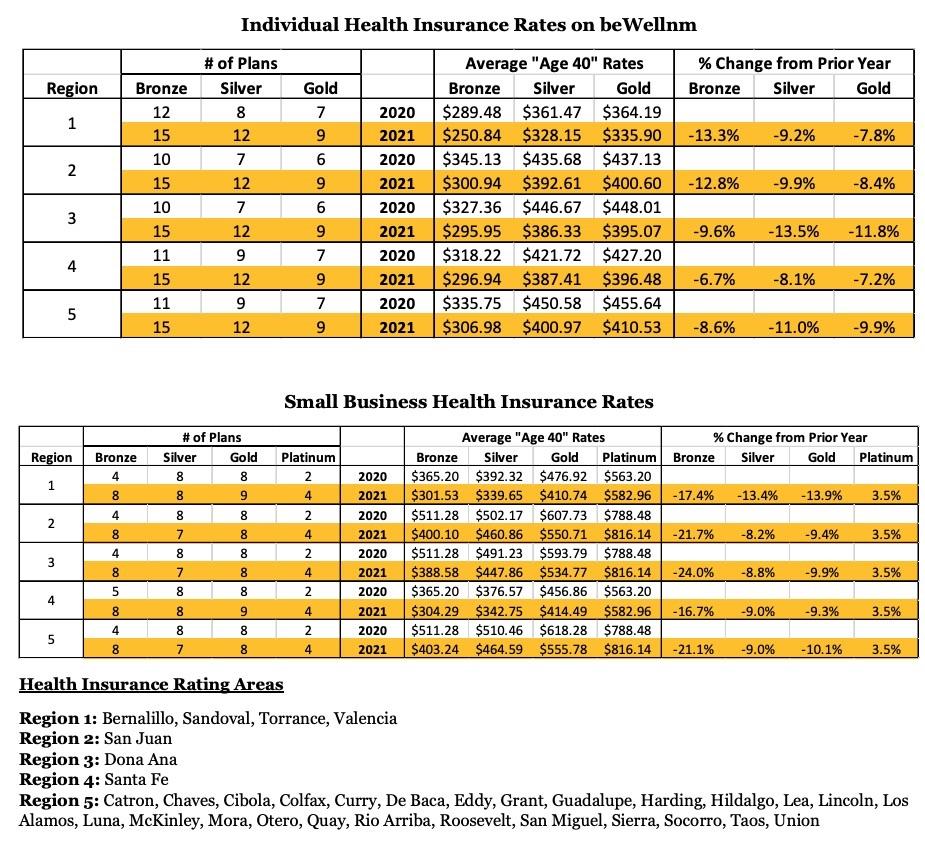 As noted in the press release, New Mexico will actually have more carriers to choose from this year in spite of NMHC's closure, as there are two new carriers joining the individual market: Friday Health Plans and Western Sky (a subsidiary of Ambetter).

The requested average rate increases came in at 9.9% overall, but one of the quirks of how weighted averages work is that removing NMHC's 32% rate hike actually means a much lower average for the other carriers. This, combined with dramatic reductions in some fo the other carrier filings (BCBSNM, in particular, asked for a 3.6% increase but was approved for a 7.6% decrease) means that the weighted average rate change for NM's indy market is actually a 1.1% reduction...really more like -1.5% when you remove NMHC's enrollees from the tally as well.

There were less-dramatic reductions in the final small group rates as well, from +6.6% to +2.2%. 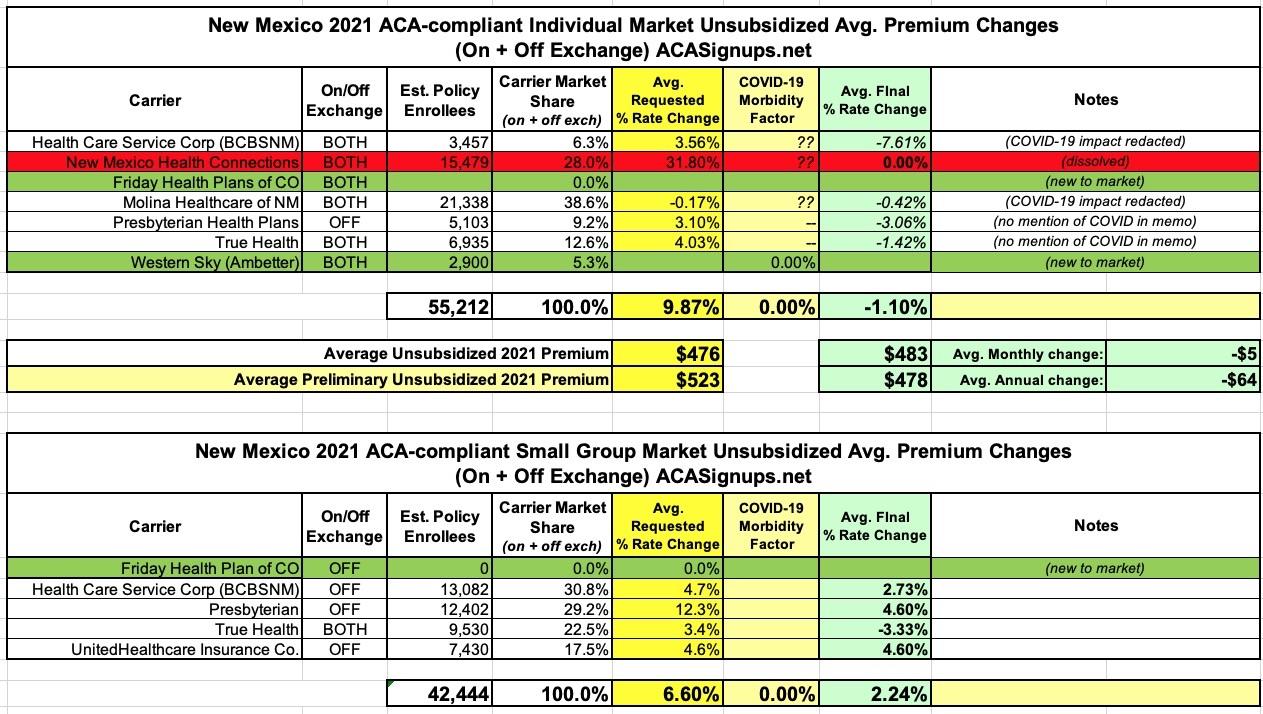