In fact, even the CMS report is pretty bare-bones this year...the accompanying Public Use Files also seem rushed, with the column headers in data mode instead of reader-friendly English. Interesting.

Having said that, I am starting to dig into the 2020 OEP report, and there are some noteworthy items beyond the raw numbers. For one thing, Louise Norris gave me a heads up that there's something very odd going on with the year over year average premium rate changes in Vermont.

Here's my final estimates of Average Unsubsidized 2020 Premium Rate Changes for the ACA-compliant individual market. Nationally, I concluded that average premiums were dropping ever so slightly (around 0.2% overall), from $594/month...to $593/month.

It's important to note that the averages for each state (and nationally) assume that 100% of current enrollees stick with the same policy the following year. That never happens, of course; some policies are always dropped by the carrier, while there's constant churn in the market as current enrollees drop coverage due to life changes (aging onto Medicare, moving to a different state, getting a job with coverage, etc). Heck, my own family switched from an ACA exchange plan to a University student plan this year when my wife went back to get her master's degree.

Even among those who stay on an ACA exchange plan, there's still some who either upgrade or downgrade their policies voluntarily if they find that a different plan better suits their needs (from a PPO to an HMO, from a Silver to Bronze, from one carrier to another, etc.) As a result, the effective average rate changes the following spring are generally a few points lower than the approved premium changes in the fall.

Historically I have a pretty good track record, but let's take a look this year. Below I've listed the actual 2019 and 2020 average monthly premiums (from the CMS Public Use Files) and my final estimated rate changes from last fall, along with the difference in percentage points. I've sorted them from highest to lowest in terms of how much I over/underestimated the change: 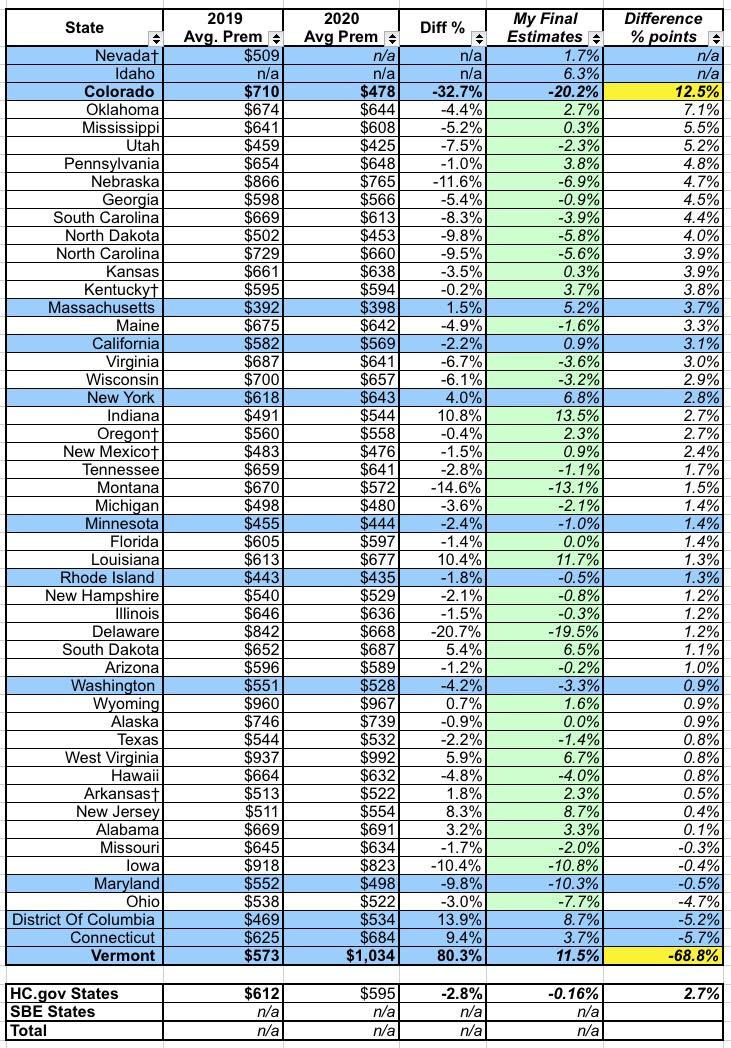 CMS is missing data for two states (Nevada and Idaho), so I can't really compare those. Of the other 48 states + DC, I was actually very close in 40 of them (any state where the last column is between -5 to +1 percent). The states I was significantly off on are:

Of all 8, the only ones which really stand out are Colorado and Vermont, however.

For Colorado, Norris (who happens to live in Colorado herself) explained to me that the massive average rate drop (33% vs. my estimate of 20%) was mostly due to the state's new reinsurance program being more disruptive than expected. As she explains it, a ton of people switched carriers from Kaiser to Anthem this year, partly due to Anthem significantly underpricing, partly due to Kaiser pulling out of some regions of the state. Unlike most state reinsurance programs where the formula is the same statewide, in Colorado's case the reinsurance waiver law was written in such a way that it targeted different Rating Areas of the state differently...some were given more generous reinsurance funding, others were less so. This actually led to some negative consequences as well, in the form of "reverse Silver Loading", as some enrollees who had taken advantage of the weird dynamics of Trump's CSR funding cut-off in 2019 suddenly saw those advantages completely reversed in 2020.

OK, so that's Colorado. But what about Vermont?

Vermont was already an outlier--they were one of just 3 states (Indiana and Louisana are the other two) where I was expecting average premiums to increase by double digits this year.

However, when I said "double digits", I meant 11.5%. I never contemplated that Vermont might raise their average 2020 premiums by a whopping 80% this year.

If this is accurate, it would instantly catapult Vermont's premiums from being right in the middle of the pack...to the highest premiums in the country, overtaking Wyoming for the top spot and pushing past $1,000/month for the average unsubsidized enrollee.

I find this incredibly difficult to believe, not just due to it making no logical sense, but also because I haven't heard a peep from the Vermont press about "sky high premium hikes!" etc. over the past six months. As Norris notes, the Kaiser Family Foundation backs me up on this...they put Vermont's 2020 average benchmark Silver premium at $662. The benchmark Silver is always pretty close to the overall average premium (which I put at $637/mo). There's simply no way that Vermont's average premium is that high or anywhere close to it this year.

I'm assuming this is a typo/clerical error in the Public Use File, but I'll update this if I find out what the deal is.

As for OK, MS, UT, OH, DC & CT, I'll see if I can find out if anything weird happened as well, but those are all far smaller outliers than CO & VT.