Colorado issued a rough update the other day ("over 124K"), but they gave the official 4/15 tally today:

Oh, by the way: The "over 124K" press release issued on the 14th was a big part of the reason why I downshifted my total projection from the 7.9-8.0M range down to around 7.78M a few days back. I assumed that the only reason they would issue a number press release the day before the deadline would be if the enrollments were tapering off so much that there would only be a handful left to count on the final day.

Obviously I was wrong; CO managed to add another 3K QHPs on the last day.

Oregon continues to plug along, adding an impressive 3.8K more NET QHPs and 7.3K more Medicaid enrollees the past week...not sure if this runs through 4/15 exactly or if it includes yesterday as well (Oregon is one of the states going beyond 4/15), but I'm lining them up at 4/15 for the moment:

Hey FOX News: Here's a free graph for you to use!

I felt kind of bad for turning FOX News down for their kind offer to have Bill O'Reilly or Sean Hannity scream at me for 10 minutes (Then again, I don't recall which show they wanted me to appear on...perhaps it was FOX & Friends?)

Fortunately, my friend LOLGOP has provided a gift for me to pass along to them to make up for any hard feelings: 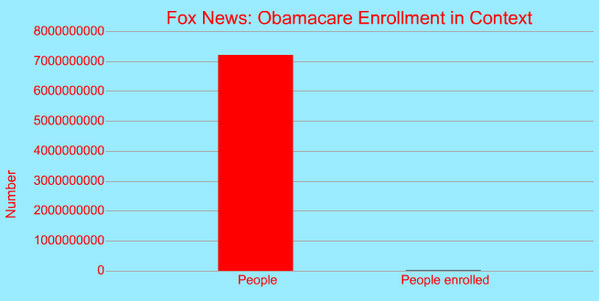 BOOM! There it is: Pres. Obama announces 8M Exchange QHPs

And there you have it:

"The bottom line is the share of Americans with health insurance is up," he said from the White House briefing room. "This thing is working."

In a fact sheet released simultaneously, the White House said 28 percent of those enrollees were ages 18 to 34, the key "young and healthy" population, up from 25 percent at the end of February.

Details to follow as they're released (where's that HHS report, darn it???)

One thing to note: The NY Times is reporting that it's 35% "under 35". Presumably the 7% difference between the two numbers are made up of children under 18:

So, now that I have the data through at least 3/31 (and in most cases, through mid-April) for all 15 state-run exchanges, I can start to play with the statistics a bit.

However, we also know that the total exchnage QHP enrollment figure is a minimum of 7.5 million, and almost certainly closer to 7.9 - 8.1 million. Let's assume the low end: 7.9M total.

I was so caught up in the national tally implications, I forgot to actually devote a proper entry to California itself. There's some additional key numbers to look at here:

From April 1-15, 205,685 consumers – including a one-day record of more than 50,000 on the final day – completed their applications and selected health plans through the Covered California exchange, bringing the total to 1,395,929 at the end of the historic, first open enrollment period. The total exceeds the base projection for Covered California for the entire six-month enrollment period by more than 815,929.

Holy Crap on a Stick!

From April 1-15, 205,685 consumers – including a one-day record of more than 50,000 on the final day – completed their applications and selected health plans through the Covered California exchange, bringing the total to 1,395,929 at the end of the historic, first open enrollment period. The total exceeds the base projection for Covered California for the entire six-month enrollment period by more than 815,929.

Just a reminder: Assuming that Inside Health Policy has it right, the official HHS report should be released sometime today and should include about 99% of the exchange QHP enrollment data through 4/15.

In the past, they've usually released the monthly reports around the 11th or 12th of the following month. In this case they've obviously been delayed because of a) the insanity at the end of March and b) thankfully, they apparently want to squeeze in the first half of April as well (as you know, I was deeply concerned that they might lop off the last 2 days of the month and roll them over to an April report next month, which would cause no end of confusion among sloppy media outlets which can't take a glance at the calendar and do basic math).

They generally release these reports around 4pm. I know this because there've been at least 2 cases where the conference call with Kathleen Sebelius started up right as I was waiting for my kid to get home from school, so we'll see if that holds true today as well.

This is a guest post by Paul Mullen, Consultant Economist, Austin, TX; former Economic Advisor to the UK Minister for Local Government, Minister for Housing & Secretary for the Environment:

I would love to believe RAND's estimated 8.2 million increase in ESI between September and March but my experience in commissioning similar polls suggests to me that it is not real but due to an unanticipated side effect of the poll methodology.

We know that there is a pretty large "churn" in insurance status. Some people will gain jobs with insurance, while others lose them. Some people retire, get sick, or die. But one would expect the number gaining and losing employer coverage would be about equal. RAND's 8.2 million increase is the difference between 14.5 million estimated to have gained employer sponsored insurance and 6.3 million estimated to have lost it (with an estimated 102.4 million having employer coverage in both polls).

"Woodworker" poll results and my decision on the terminology

Yesterday I posted a poll asking whether people found the term "woodworker" (used to describe new Medicaid enrollees who were already eligible to be enrolled even without the expansion provisions of the ACA) to be offensive. The thinking is that "woodworker" makes it sound like you're an insect creeping around under the floorboards and so forth; not the prettiest image.

Anyway, the poll is now closed, and the results are in...out of 505 votes total:

This led to a robust discussion about what seems to be a pretty minor issue, but apparently means a lot to people. Other suggestions included:

Texas: Baker Institute Survey suggests 760K exchange QHPs as of 3/15...NOT including kids!

I'm debating whether to actually plug this number into the spreadsheet or not. On the one hand, I'm reluctant to do so without hard official numbers being given (this is just a survey, only runs through mid-March and doesn't include kids anyway).

On the other hand, doing so wouldn't change my total projection of around 7.78 million exchange QHPs; it just reduces the "unsorted" number at the bottom. Plus, I'm almost certain that the March HHS report is going to be released sometime tomorrow (Thursday) anyway, so if I'm wrong, it'll be easy enough to correct it at that point.

You may remember Georgia Insurance Commissioner Ralph Hudgens as the jackass who actually bragged about blocking his own constituents from gaining access to healthcare last August:

Washington State is doing a fantastic job of tracking pretty much every data point about health insurance in the state (I already had the 146K number):

OLYMPIA, Wash. – The individual health insurance market has grown to more than 324,900 people in Washington state, according to updated enrollment information reported by health insurers to the Office of the Insurance Commissioner this week.

...Before open enrollment began on Oct. 1, 2013, approximately 278,000 people were enrolled in health plans in Washington state’s individual market. Some 238,000 people received discontinuation notices from their insurers and had to find new coverage by Jan. 1, 2014. Estimates were made earlier this year that 113,000 of those who received notices would qualify for subsidies and 30,000 would qualify for the state’s newly expanded Medicaid program, Apple Health.

Avera reported about 8,950 South Dakotans had both enrolled in its plans and paid their first premiums since the enrollment period began in October. Sanford reported 1,443 and DakotaCare 59. The total is 10,450, but the government relaxed the March 31 deadline and some enrollments are still coming in. The insurers also have some applicants who enrolled but didn't complete the purchase by paying their first premiums.

Avera, in earlier phone surveys, found that 54 percent of enrollments effective in January and February were people without coverage. Avera is studying the issue further and is working with Augustana College to explore what consumers care about most in a decision to buy.

Read that carefully--54% of the January and February-start policies were previously uninsured. That means people who enrolled between 10/1/13 - 1/15/14. All indications (and logic) are that those who enrolled later than mid-January are more likely to be newly-insured than the earlier enrollees.