“The lesson is striking: Consumers are the big winners when marketplaces use all the tools of the Affordable Care Act,” said Covered California Executive Director Peter V. Lee. “The policies underway in these three states are easily transferable, and if applied to the federal marketplace, taxpayers would save billions of dollars in subsidies, and middle-class Americans would benefit from much lower premiums.”

The report examined the cost of coverage by comparing the average benchmark premium in three states and the FFM between 2014 and 2019. The weighted average increase in California, Massachusetts and Washington was 39 percent, compared to the 85 percent increase in FFM states. 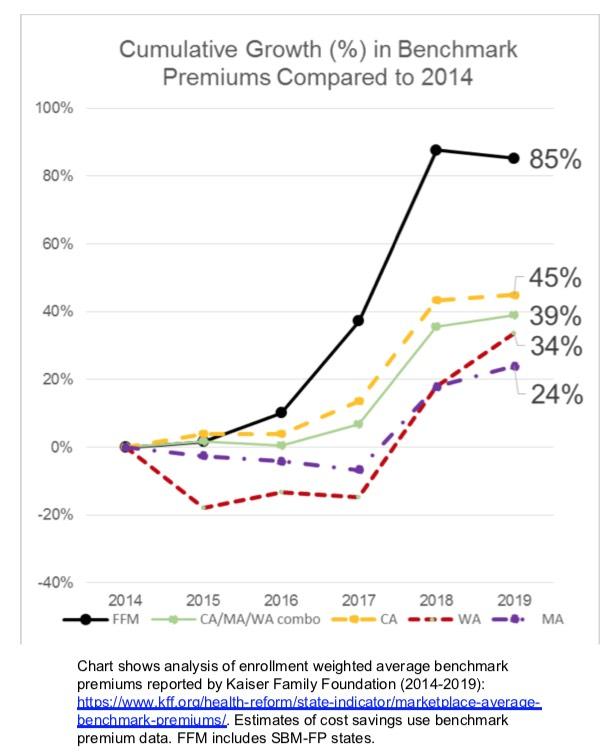 In addition, the report also found if the FFM states had experienced the same lower premium growth seen in the three states, the federal government could have saved roughly $35 billion in lower subsidy payments between 2014 and 2018.

While the report did not quantify the increased costs paid by unsubsidized consumers in FFM states, they would have saved substantially and been less likely to have been priced out of coverage.

The report also examined the impact on new enrollment of recent federal decisions on marketing and outreach and the elimination of the individual mandate penalty.

During the final days of open enrollment for the 2017 plan year, the federal administration began a series of cuts to marketing and outreach on behalf of FFM states. These cuts have been deepened and maintained, resulting in a significant reduction in new enrollment in states served by the federal marketplace. The decrease in new enrollment likely means a less-healthy consumer pool, which would lead to the larger premium increases seen above.

From 2016 to 2018, the 39 FFM states saw the number of new enrollees drop from 4 million to 2.5 million, a decrease of 40 percent. By contrast, new enrollment in California, Massachusetts and Washington — states that control their own marketing and outreach — remained relatively stable (see Figure 2: New Enrollment Growth by Marketplace, Comparing 2016 to 2018).

“State-based marketplaces know that health insurance is a product that needs to be actively sold to consumers, and getting the word out is a proven way to promote enrollment,” said Pam MacEwan, chief executive officer of the Washington Health Benefit Exchange. “Enrolling more people means a healthier risk pool, which lowers premiums and saves money for everyone in the individual market.” 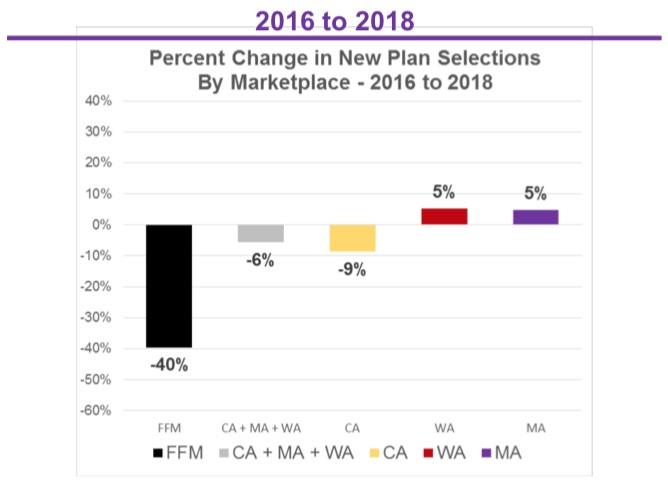 The open-enrollment period that just concluded for the 2019 coverage year marked the first time the marketplaces would operate without a federal individual mandate penalty, which was zeroed out through the Tax Cuts and Jobs Act of 2017 and signed into law by the president. During the most recent open-enrollment period, new enrollment in FFM states dropped an additional 16 percent — on top of the already large drop of 40 percent in the prior two years. California and Washington also experienced steep declines in the number of new enrollees signing up for coverage. However, Massachusetts — which kept a state-level mandate penalty — saw new enrollment increase by 31 percent (see Figure 3: New Enrollment Growth by Marketplace, Comparing 2018 to 2019). 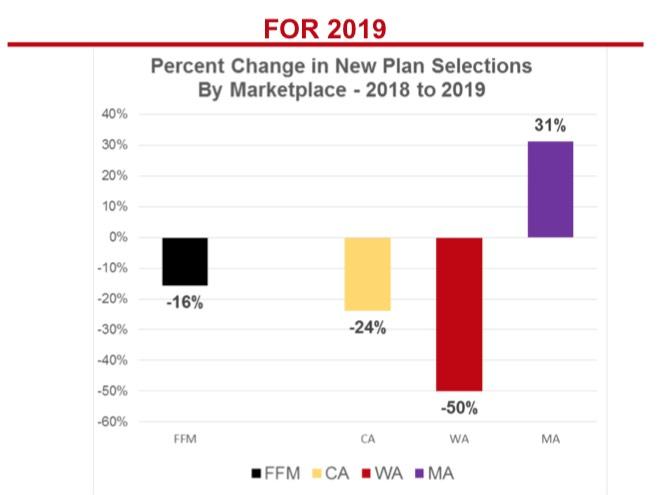 “The individual mandate in Massachusetts has proven to be an effective part of our effort to provide access to affordable coverage to everyone,” said Louis Gutierrez, executive director of the Massachusetts Health Connector. “Our experience shows that a mandate that provides incentive to participate, while also delivering important protections and benefits to consumers, plays a vital role not only in people getting covered, but also staying covered.”

Other marketplaces have also instituted a penalty, such as New Jersey and the District of Columbia. While critics may point to lower new enrollment in New Jersey as proof that a penalty is not effective, Lee says that is not the case. “The penalty works, and to solely highlight New Jersey — which had a penalty in place, but also had its marketing and outreach efforts undercut — is not a reasonable comparison.”

“While Washington kept premium increases in the early years of the Affordable Care Act to low single digits, the past three years have seen big increases due to federal policy changes that continue to bring uncertainty to the market, including the zeroing of the individual mandate penalty,” said MacEwan. “In particular, 2019 saw an almost 14 percent premium increase. These premium increases are having a large negative impact on the many Washington consumers who do not benefit from a subsidy.”

The release of the report comes on the same day that leaders of the California and Massachusetts marketplaces appeared before the Health Subcommittee of the U.S.