I took a look at BCBSA's proposal itself and there are some interesting differences between what they're proposing and what can be found in the House and Senate ACA 2.0 bills. Here's a side-by-side comparison of just the proposed Advance Premium Tax Credits (APTC) and Cost Sharing Reduction (CSR) formulas in each: 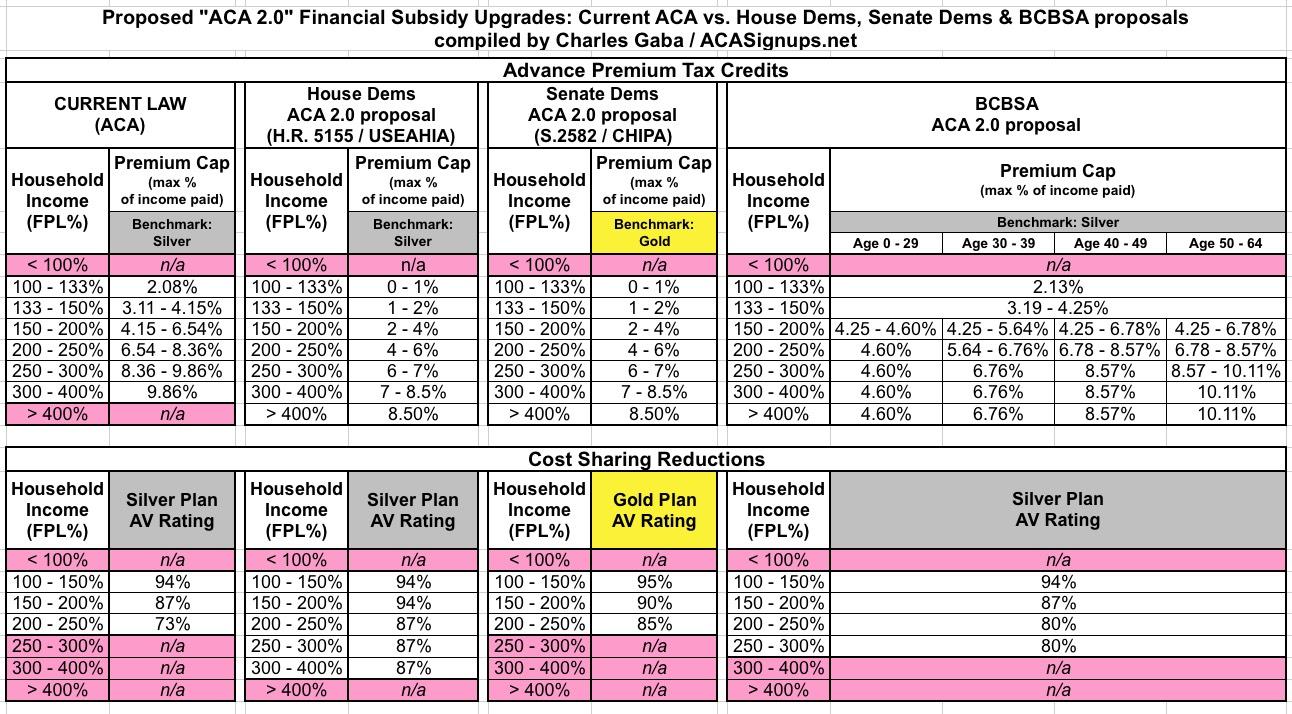 The most obvious difference between what BCBSA is proposing and that of the House and Senate bills is that BCBSA's APTC formula is more complicated...with a good reason. The percent-of-income ranges they're proposing appear to be less generous than either the House/Senate bills (or even the current formula in some cases)...but they're also proposing to break the formula out by age range, so that it's more generous for younger enrollees and somewhat less generous for older enrollees.

This may seem like it would be unfair to older folks, but the whole point of the more generous subsidies for younger folks is to draw them in, thus improving the risk pool and lowering premiums across the board. In a way, this is sort of a way of getting around the ACA's strict 3:1 age band rule.

The BCBSA proposal also pushes for a couple of other things which Anderson didn't include in his bullet list above, although some of these are included in the House and/or Senate bills already:

Congress should establish a sustained federal funding system to support the cost of caring for those with significant medical needs. As people with serious health conditions entered the individual market, the cost of medical claims to pay for their care rose rapidly (see Figure 3), and now exceed costs for those with employer-based coverage. Five percent of people who buy coverage in the individual market represent almost 60 percent of health care claims’ costs. A sustained federal funding mechanism which states could draw on to support the cost of caring for those with serious health conditions is essential to make premiums more affordable for everyone, especially those who do not qualify for a tax credit.

Creating a premium affordability program to support the cost of care for those with serious medical conditions (those with claims in excess of $65,000) would reduce premiums by about 15 percent and cost the federal government less than $3 billion.2 The lower premiums resulting from such a program would mean tax credit expenditures—which are tied to premiums—also would fall. Such a program would be a major commitment to assuring that coverage remains available and affordable for those with pre-existing conditions.

Interestingly, BCBSA never actually uses the word "reinsurance" or "invisible high risk pool" in their proposal, but that's exactly what this is describing...there's even a footnote which states "The program would pay 70 percent of the costs between $65,000 and $1 million" which is the very definition of how reinsurance programs work.

Congress should modernize health plans that are linked with health savings accounts (HSAs).

Currently, high-deductible health plans that are linked to HSAs are prohibited from offering services other than preventive care on a pre-deductible basis. This can create cost barriers to care for patients with chronic illnesses. To provide better management of chronic disease, Congress should permit HSA-qualified health plans to cover high value services before the deductible. For example, a health plan could provide coverage of insulin before the deductible to ensure patients with diabetes have access to this live-saving drug. This would preserve the consumer-directed features of HSAs and assure access to services that keep people healthy and address chronic conditions.

My wife and I dabbled with the idea of switching to an HSA policy for 2019, but in the end decided to stick with what we had. I still don't really "grok" HSA policies very well so I can't comment on this idea one way or the other.

Exchanges should provide information on coverage status to states to improve outreach efforts and simplify enrollment. States should have access to aggregated information on health insurance enrollment and income status to determine who is potentially eligible for government assistance in subsidized, qualified health plans, as well as in the Medicaid and CHIP programs. This information would allow better targeting of outreach and education campaigns. At the same time, Congress should work to simplify the eligibility rules for tax credits to make it easier for people to know whether they qualify for financial assistance to help them purchase coverage.

This is an excellent idea, and is one which I don't think is addressed in either the House or Senate bills (or if it is, it's worded differently so I missed it). This would also be a boon for data analysts such as myself...assuming that information was made available to the public, that is. Right now some of this info is scattershot...some states and exchanges have highly-granular data available while others have almost nothing available for analysis and comparison, which is very frustrating.

This is a direct shot across the bow against the proposed 2020 NBPP (Notice for Benefit & Payment Parameters) rule which was rolled out by CMS back in January. One of the proposed changes was about whether or not ACA exchange auto-renewals should continue to be standard policy or not. As I explained in a follow-up piece, I personally strongly discourage people from auto-renewing for several reasons...but I also strongly support keeping it as an option for people to have.

There's also the items Anderson did mention, including permantly killing the Health Insurance Tax. This is a tax which is applied to all health insurance premiums (not just ACA plans, but other policies as well) to help pay for the APTC, CSR and Medicaid expansion costs in the first place. The HIT was charged in 2014 and 2015, waived in 2016 & 2017, brought back for 2018 and waived again for 2019. BCBSA points out that eliminating it completely would lower ACA premiums by 2-3%, which is true, but it would also jack up the deficit even further.

Frankly, I have no hard opinion on this one...that revenue could obviously just be made up by increasing some other tax at this point...it could be anything, really...higher marginal tax rate, elimination of loopholes, whatever. I just wish Congress would decide what they want to do with the HIT and stick with it instead of playing Hokey Pokey with it.

One other noteworthy item from their proposal:

Taken together, the actuarial firm Oliver Wyman estimates these three actions would reduce the average individual market premium by 33 percent, while enabling an additional 4.2 million people to obtain ACA coverage.

Some of the BCBSA proposals are somewhat different from the House/Senate ACA 2.0 bills, but the 4.2 million figure is pretty much in line with what I've been spitballing, in addition to substantially lowering costs for existing ACA enrollees.

Of course, the BCBSA proposal doesn't include some of the other features of the House and Senate bills, many of which BCBSA probably isn't exactly a fan of (I've bold-faced the ones I presume they're opposed to below):

Gee, I can't imagine why some of these provisions aren't included by BCBSA lol...

In any event, as Anderson concludes:

...We should look to see what the other major interest groups that can elect to drop $100 million in support or in opposition to major health policy bills. There policy papers will shape the contours of possibility and the trade-offs of ambition.

I know all of this is gonna fall on deaf ears among the MFA die-hard community, but the fact of the matter is that even in a Big Blue Wave scenario, the odds of pushing full-blown MFA through are slim...and once again, even if it were to be pushed through, there would still be a need for the ACA itself to be beefed up during the phase-in period (which wouldn't be until at least 2023 at the earliest under the House MFA version or 2025 under the Senate version).