MAJOR UPDATE: "If this holds up on appeal, insurers could buy us the damn border wall." 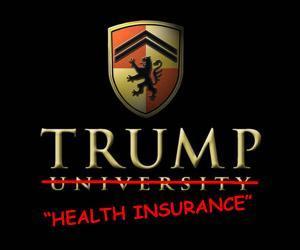 Note: Huge props to Amy Lotven for breaking this story.

I've written about the CSR Saga so many times that I'm getting tired of explaining the backstory. However, once again, here's the short version:

Once again, the very short version is this:

(I'm not going to rehash how Trump was able to cut off those payments with a Thanos-like snap of his fingers; suffice to say it's connected to a lawsuit filed so long ago that John friggin' Boehner was still Speaker of the House at the time).

You may not give two hoots about the $2 billion that the carriers lost in the final quarter of 2017 as a result of the CSR cut-off, but you absolutely should care if you were one of several million people who were enrolled in an individual market policy last year, earned more than 400% of the Federal Poverty Level and weren't fortunate enough to be able to take advantage of the Silver Switcharoo workaround...because it means you had to shell out a whopping ~$780 apiece on average more in 2018 as a result.

Now, most of the above is taken directly from my previous CSR lawsuit post in January. At the time, I was noting that the decisions on the first of these cases were starting to trickle in, and so far it was smiles all around for the insurance carriers:

...Several health insurers have sued the U.S. government over its failure to make cost-sharing reduction payments that help lower healthcare costs for certain consumers. One just scored the first victory. The U.S. Court of Federal Claims ruled in favor of Montana Health Co-op, which sued the federal government for $5.3 million in unpaid cost-sharing reduction payments, finding that the government violated its obligation under the Affordable Care Act when it stopped paying the CSRs in October 2017."

...With many of these cases now resolved, this post focuses on the status of lawsuits brought by insurers for unpaid CSRs. These lawsuits began as early as November 2017 when Common Ground Healthcare Cooperative, an insurer based in Wisconsin, amended its class action lawsuit on risk corridor payments to additionally contest the government’s failure to make CSR payments. This was followed by separate challenges from several other insurers.

To date, two insurers—Maine Community Health Options and Sanford Health Plan—have succeeded in their challenges. ...The federal government intends to appeal both cases to the Federal Circuit, and the cases will likely be consolidated on appeal.

So that's where things stood a month ago. Today, however, there were several additional developments...including one hell of a twist in one of the lawsuits:

Hmmm...I'm not sure what the status is re. Maine Community Health Options, since the January article made it sound like they had already won their case a few months back, but I presume it just successfully reached the next stage of the process. The L.A. Care lawsuit I wasn't up to speed on. From Modern Healthcare:

That's $17 million in back payments ruled for the insurance carriers so far, along with whatever Sanford Health Plan is owed. In addition, there was a third win today for another carrier...the first one which filed, mentioned above:

Make that THREE insurers this week! A federal judge also ruled in favor of Common Ground Healthcare Cooperative in another CSR lawsuit--that one has class-action status.

By my count that's five carriers which have been successful in their CSR lawsuits (Montana, Common Ground, L.A. Care, Maine CHO & Sanford Health), although all of them are almost certain to be appealed if they haven't been already.

That brings me to the biggest eyebrow-raiser:

Fed court says CHC can get CSRs reimbursed for 2017 AND for 2018 despite silver-loading.. https://t.co/v1YwtDk1DL

Before anything else, I should note that the headline of the Inside Health Policy article (as well as the first tweet) appears to be erroneous--this particular lawsuit was filed by the Texas-based Community Health Choices, not the Maine-based Community Health Options mentioned above. Easy mistake to make, I suppose, since Maine CHO also won their CSR lawsuit...

The rest of the article is behind a firewall, but I have a copy of the actual court decision thanks to Amy Lotven...and it's that reference to 2018 CSR payments which is the jaw-dropper.

From the decision itself:

...the court is unpersuaded by defendant’s related contention that insurers’ ability to increase premiums for their silver-level qualified health plans to obtain greater premium tax credit payments, and thus offset any losses from the government’s nonpayment of cost-sharing reduction reimbursements, is evidence that Congress did not intend to provide a statutory damages remedy for the government’s failure to make the cost-sharing reduction payments.

In sum, Congress’s failure to include any appropriating language in the Affordable Care Act does not reflect congressional intent to preclude liability for cost-sharing reduction payments. This conclusion, however, does not end the court’s analysis because defendant also argues that Congress’s subsequent failure to appropriate funds to make cost-sharing reduction payments through annual appropriations acts or otherwise signals congressional intent to foreclose liability.

Did you follow all of that? Basically, the judge is saying that while the #SilverLoading workaround is very clever and does solve the problem on paper, it doesn't make any difference legally or contractually. The federal government owes the insurance carriers the CSR reimbursement payments for 2018 regardless of whether they found another way to cover their CSR expenses.

Sure enough, in the decision:

Again: The lost CSR payments from the last 3 months of 2017 are completely reasonable by any standard. However...

And there you have it: Judge Sweeney just ordered that Community Health Choices is entitled to be reimbursed for all of the CSR funds they paid out in 2018 even though they jacked up their premiums to cover that amount.

Obviously this will be immediately appealed by the Trump Administration, and I find it hard to believe that this particular decision would become precedent for all fo the other CSR cases, but let's suppose, hypothetically, that the decision held and applied to every carrier in every state for 2018's CSR payments. What would that potentially mean?

Well, I think the carriers collectively shelled out around $10 billion in CSR expenses to enrollees last year, give or take, so it's conceivable that the carriers would get to double-dip to the tune of $10 billion from the federal government.

As U of M law professor and ACA expert Nicholas Bagley put it:

Of course, Bagley is being somewhat tongue-in-cheek here, because he knows about one important caveat: The ACA's MLR rule.

Remember, the ACA has a provision which limits the amount of gross profit that insurance carriers can make to either 15% (for the large group market) or 20% (for the small group and individual markets). This is called the 80/20 Medical Loss Ratio (MLR) rule, and it states that carriers have to spend at least 80% of their revenue on actual healthcare claims from enrollees. If they spend any less than that, they have to pay back the difference in the form of rebates to the policyholders.

The MLR rule has been extremely successful. It went into effect back in 2011 (long before individual market policies had to even be ACA compliant), and has resulted in insurance carriers paying back nearly $4 billion since then...around $565 million per year on average.

Assuming every carrier was at or below the 80% MLR threshold in 2018 and every one of them successfully arranged to effectively "double dip" and got the federal government to pay them their full 2018 CSR reimbursements on top of their jacked-up Silver premiums, it's conceivable that the carriers would then be forced to turn around and rebate the full $10 billion to their policyholders.

That would be 2.5x as much rebate money in a single year as the MLR rule has paid back to enrollees in the previous seven years.

Realistically, this is almost certainly not going to happen. Even if it survives the appeal, and even if it somehow ended up applying to every carrier, not all of them hit the 80% MLR mark, so the total would be less than $10 billion. In addition, as healthcare actuary Rebecca Stob noted:

In other words, the carriers would have to actually go through the process of requesting/demanding their 2018 CSR payments...and while that might seem like a no-brainer, why would they bother to do so if they knew they'd just have to turn around and pay it all back to their enrollees anyway?

My guess is that the only carriers which would do so are the ones who are above 80% MLR to begin with...if they're at 85%, they would probably file for enough federal reimbursements to get them down to the 80% mark, but no more than that.

Still, it's an absurdly fun thought experiment, and the latest twist in the increasingly absurd CSR sage.

UPDATE 2/17: Welp. So much for this being a single, isolated case:

This ruling just went from one carrier to, by my count, 92 different insurance carriers across multiple states.

But wait, there's even more:

In other words, at least two of the insurance carriers which had only requested CSR payments for the last 3 months of 2017 are ADDING 2018 CSR payments as well in response to Judge Sweeney's ruling.

Again, the odds of this being upheld on appeal are probably slim, but if it does hold, it could have huge implications. Furthermore, the point Rebecca Stob made about carriers being unlikely to bother going through the trouble of filing for the 2018 payments since most of it would have to be doled out to policyholders anyway appears to be on shakey ground if carriers which hadn't even asked for the 2018 payments before are already tacking it onto their legal requests.

It's also worth noting that MLR rebates are actually broken out over a three year rolling average. That means the hypothetical $10 billion wouldn't be applied only to 2018 revenue...it would be split into thirds.

If I'm understanding this correctly, it means that the "double dipping" for 2018 could also be used by carriers to cover any 80% MLR overages in 2016 (when a lot of carriers lost money on the ACA market) and 2017 as well. This would explain why they're willing to file for it after all.

UPDATE x2: It looks like the amount of money potentially at stake here is even more than I estimated above:

Not all 13 million or so people on the ACA-compliant individual market would be likely to share in this $12 billion/year windfall, but if they did, that'd average out to around $920 apiece. Stay tuned...