Thanks to Dan Goldberg for the heads up; this Just In via the New York Dept. of Financial Services:

5/31/2019 - Health insurers in New York have submitted their requested rates for 2020, as set forth in the charts below. These are the rates proposed by health insurers, and have not been approved by DFS. 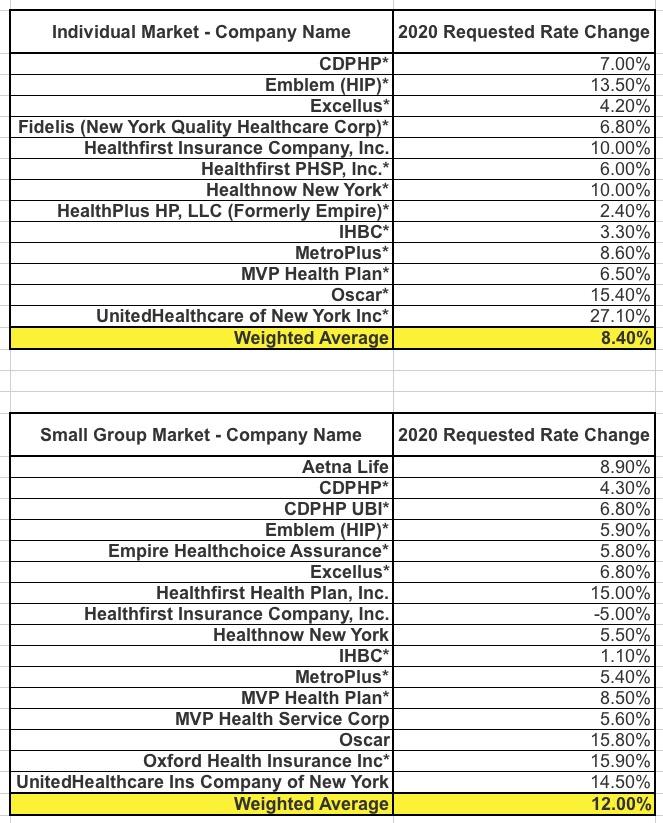 * Indicates the Company offers products on the NY State of Health Marketplace.

The NY DFS website also includes handy links to the actual enrollment numbers for every carrier on both the Individual and Small Group market, allowing me to break out the numbers further:

When are carriers in YOUR state supposed to submit their 2020 ACA premium rate changes?

So what's the deal with the other 46 states (+DC)? Well, here's a handy 2020 Submission Deadline table from SERFF (the System for Electronic Rates & Forms Filing, a database maintained by the National Association of Insurance Commissioners).

However, it's a bit overly cumbersome: It stretches out over 5 full pages, and includes columns for Standalone Dental Plans as well as a bunch of info regarding the Small Group Market. I used to try tracking Small Group rates as well, but that got to be too difficult to keep up with, and I haven't really done much analysis of standalone dental plans at all. Let's face it: About 90% of the drama, controversy and confusion regarding ACA premiums is all about the individual market.

Covered California announced Friday that it intends to partner with 105 community-based organizations to educate consumers about their health care options, offer in-person enrollment and renewal assistance and provide ongoing support on how to get the best value from their health plan. The Navigator grants announced are part of Covered California’s ongoing commitment to support robust marketing and outreach, including working with trusted organizations throughout the state to help hard-to-reach people understand this new era of health care.

On October 1st, 2013, the first Open Enrollment Period (OE1) under the Affordable Care Act kicked off to much hoopla. As everyone knows, the largest of the ACA exchange websites, HealthCare.Gov, infamously melted down at launch due to a multitude of hardware and software problems ranging from insufficient server capacity to poor workflow design to buggy coding and much, much more. However, as Steven Brill detailed in the March 10, 2014 issue of Time magazine, by early December, the worst of the problems had been resolved, and by the time the second Open Enrollment Period came along a year later, HealthCare.Gov had been completely overhauled, with additional improvements and enhancements every year since.

The difference has been dramatic: On October 1, 2013, only six people (not six thousand or six hundred...six) were able to actually make it all the way through the HC.gov interface and enroll in a healthcare policy. On December 15, 2016, six hundred and seventy thousand enrolled.