Fortunately (and to their credit), the GOP state legislature worked with the Independent governor to pass a new law which created a state-based reinsurance program to stave off the ugly hikes. In July, it looked as though this would result in not-fantastic-but-not-awful 10% average increase:

A major health insurer is seeking an average rate increase of about 10 percent on individual health insurance policies in Alaska, far less than what it received the last two years. Thisfollows recent steps by the state to shore up Alaska's insurance marketplace.

Premera Blue Cross Blue Shield is expected to be the only company offering individual health policies in Alaska in 2017, with Moda Health planning to leave that market. Premera received average rate increases of nearly 40 percent for 2015 and 2016.

As I'm sure some readers have noticed, I haven't posted any updates since Friday, which is highly unusual for me, especially with open enrollment rapidly approaching. I'm afraid that due to an unfortunate coincidence of timing, I have an outside personal commitment which will be eating up a lot of my time for the next 4 weeks; as a result, expect posts to be lighter than usual.

Anyway, Hawaii's official 2017 approved rates came out the other day (thanks to commenter "M E" for the heads up):

Kaiser's 25.9% request was approved as is; HMSA's 43.3% was shot down originally; they later resubmitted it at 35%, which was then approved.

You may also notice that I've started making sure to include UNSUBSIDIZED in the headlines for all of these rate hikes. This is vitally important to remember, even if it's only relevant to around 50% of individual market enrollees.

Last year, the average full-price rate hikes approved by state regulators tended to be several percentage points lower overall than the increases requested by carriers. This year, there's been very little of that; in most case so far, the regulators have pretty much authorized the premium rate increases as requested by carriers...and in many cases have approved higher increases than requested. As a result, the overall national averages approved have been pretty close to the requests (around 24-25% nationally).

However, Nevada is an exception to this trend. Back in early June, the weighted average increases requested were just over 15% state-wide (this was confirmed by the NV DOI a month later). Yesterday, however, the DOI released the approved rate hikes, and I'm happy to report that they lopped about 1/3 off the average hikes:

I originally looked at the requested rate hikes in Kansas back in June; at the time, the weighted statewide average was roughly 35%.

While I haven't seen any press releases or news stories about it, when I looked at HealthCare.Gov's rate review database this morning, I saw that they have fianl (approved) rate increases listed for all of the Kansas listings. In most cases the requests were approved as is; in Coventry's off-exchange plans, however, are being increased more than requested, giving the following.

I should also note that according to Louise Norris, Medica is also entering the Kansas exchange for the first time, which means there's no "increase" to list since there's no current rates to compare them to. 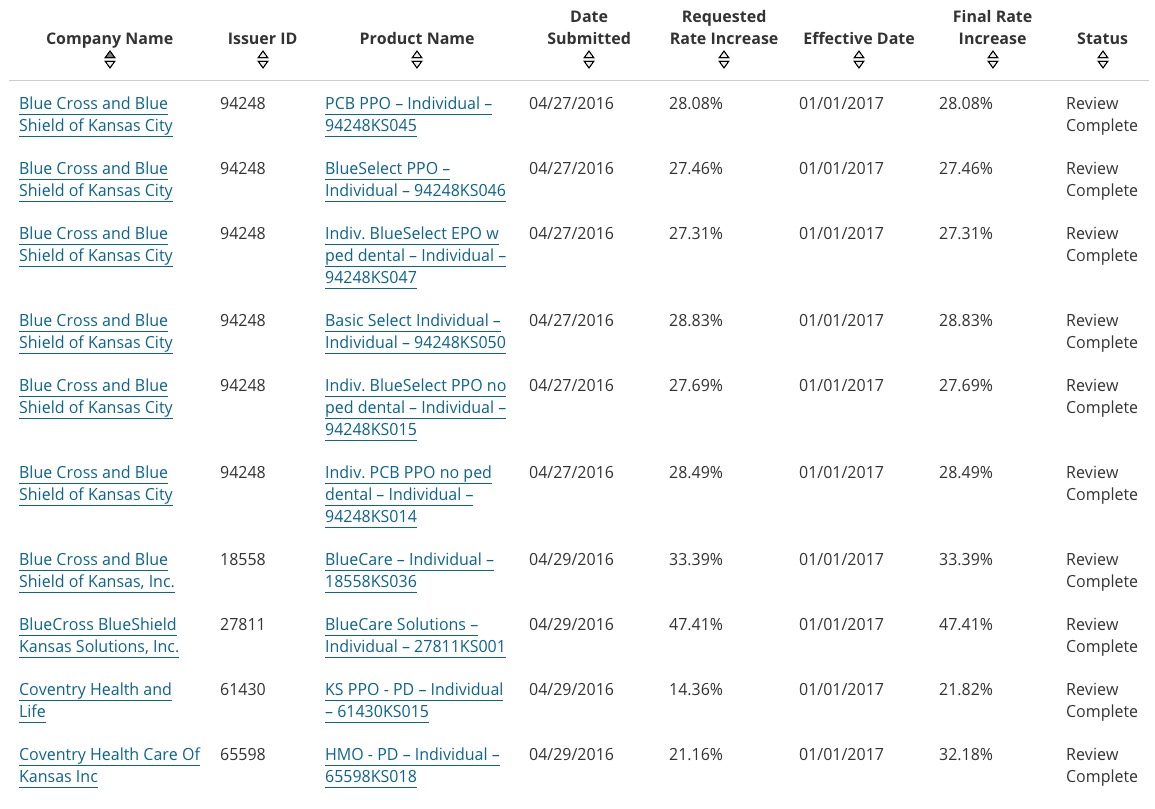 I mentioned a couple of weeks ago that Blue Cross Blue Shield of Oklahoma, which had originally asked for an already-ugly 51% average rate hike, had bumped that up to a jaw-dropping 76% ask. Well, earlier this week, they got it:

Obamacare premiums will raise a staggering 76 percent on average for Oklahoma residents, and the state's top insurance regulator says the state's insurance exchange set up by the law is on "life support."

Oklahoma's Insurance Department said on Tuesday that increases in individual marketplace plans will range from 58 percent to 96 percent.

"These jaw-dropping increases make it clear that Oklahoma's exchange is on life support," said Insurance Commissioner John Doak, in a statement. "Health insurers are losing massive amounts of money. If they don't raise rates they'll go out of business. This system has been doomed from the beginning."

Huh. OK, it looks like three of the ACA state-based exchanges have already launched their 2017 window shopping tools: Idaho, Maryland and California!

The other two announced that their 2017 offerings were open for business via press releases, but it looks like CoveredCA just quietly opened the doors without any fanfare. I stumbled across this by simply visiting the CoveredCA site and clicking the "Shop & Compare" link at the top, which now lists 2017 as the default Coverage Year (you can still choose 2016 if you need to enroll for the rest of this year via SEP). Plugging in some dummy info confirms that the plans are indeed set to start on 01/01/17.

h/t to Esther F. for the heads up:

Evergreen Health, Maryland’s version of the innovative nonprofit insurers created under the Affordable Care Act, decided Monday to become a for-profit company to avoid the possibility of a shutdown, according to its chief executive.

If the switch is approved as expected by federal and state officials, Evergreen’s unprecedented move will leave standing only five of the 23 co-ops, or Consumer Operated and Oriented Plans, which started nearly three years ago.

...Evergreen, which covers nearly 38,000 Marylanders, has been trying for the past year to forge an arrangement with federal health officials to stabilize its finances. It enlisted help from the state’s congressional delegation and in June filed suit against the federal government.

As noted below, only around 8,000 are on enrolled in individual ACA exchange policies; the rest are either off-exchange or small/large group coverage.