Rep. Golden's excuse for voting against the #ARP is tarnished brass.

When the $1.9 trillion American Rescue Plan (ARP) achieved final passage on March 10th, it did so almost exclusively along party lines. I say "almost" because there was a single Democratic House member who voted against it: Representative Jared Golden (ME-02).

I fully understand the tightrope that some swing district Dems have to walk. To his credit, Rep. Golden voted to impeach Donald Trump not once, but twice (though he only voted in favor of one of the 2 articles of impeachment against him the first time around). I certainly don't expect every single Democrat to vote the party line on every single bill.

In the end, the bill passed anyway, if only by a handful of votes; my guess is that he even received Speaker Pelosi's unofficial blessing to vote against it, as long as she knew for sure it would pass regardless.

HC.gov provides info/FAQ on when & how expanded #ACA subsidies will work

The Centers for Medicare & Medicaid Services (CMS) has just sent out guidance about how the newly-expanded & enhanced subsidies will work for those currently enrolled in (or newly enrolling in) healthcare policies via the federal ACA exchange, HealthCare.Gov.

It's important to note that the following guidelines only apply to residents of the 36 states hosted via HC.gov. The timing, policy and procedures for the new/expanded subsidies for residents of the 15 states which operate their own ACA exchanges may vary.

With that in mind, here's how CMS says things will work via HealthCare.Gov.

The first section is mostly just an overview of the ARP and a refresher on how ACA subsidies are calculated...

American Rescue Plan and the Marketplace

HC.gov
ARP
AmRescuePlan
APTC
Kill the Cliff
Up the Subs
Get Covered

Let the Grumbling Begin! ACA exchanges reassure people that yes, expanded subsidies are on the way but no, it might take awhile so chill out

My biggest takeaway from the press releases below is that everyone will be made whole (that is, those eligible for additional subsidies or newly-eligible for subsidies at all will receive them in full), but that it may take anywhere from a few weeks to several months for that to happen, so cool your jets. 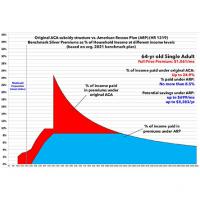 This afternoon, the Congressional Budget Office released their 10-year "score" report of the largest single chunk of the House Democrats version of the American Rescue Plan from the Ways & Means Committee:

S. Con. Res. 5, the Concurrent Resolution on the Budget for Fiscal Year 2021, instructed several committees of the House of Representatives to recommend legislative changes that would increase deficits up to a specified amount over the 2021-2030 period. As part of this reconciliation process, the House Committee on Ways and Means approved legislation on February 10 and 11, 2021, with a number of provisions that would increase deficits. The legislation would extend unemployment benefits, establish a pandemic emergency fund, increase subsidies for health insurance, provide cash payments to eligible people, expand several tax credits, and modify rules for pensions, among other provisions designed to mitigate the impact of the COVID-19 pandemic caused by the coronavirus.

Note: This is the second or third time that I'm cribbing a bit from my friend & colleague Andrew Sprung over at Xpostfactoid. If you like my healthcare policy analysis/writing style and follow me on Twitter, you should follow him at @xpostfactoid as well.

Over at Xpostfactoid, Andrew Sprung beat me to the punch by several days with an excellent two-part look at the "ACA 2.0 Hunger Games" scenario.

During the Democratic primary season, I posted a simple graph which boiled down the four major types of healthcare policy overhaul favored by the various Democratic Presidential candidates...which also largely cover the gamut of systems preferred by various Democratic members of the House and Senate.