The Colorado Dept. of Regulatory Agencies has made it pretty simple for me:

DENVER (July 14, 2017) – The Colorado Division of Insurance, part of the Department of Regulatory Agencies (DORA), today released the preliminary information for proposed health plans and premiums for 2018 for individuals and small groups. From this point until August 4, Colorado consumers can comment on these plans.

All counties in Colorado
As the Division of Insurance noted in its June 21 news release, based on the plans filed, there is at least one insurance carrier planning to offer individual, on-exchange plans in every Colorado county. However, the insurance companies have indicated to the  Division that they may be forced to reevaluate their participation in the marketplace if the lack of clarity at the federal level continues.

Senate GOP to CBO: "I Forgot!"

So the latest #BCRAP b-crap being pulled by the Senate GOP is that they supposedly "forgot" to include the Cruz-Lee Amendment with the rest of the revised BCRAP bill that they sent over to the Congressional Budget Office to score next week. Topher Spiro of the Center for American Progress posted a twitter thread this morning which started off like so...

1: Senate Republicans are about to do something unprecedented that will break the Senate.

2: They claim they forgot to send the Cruz amendment to CBO on time. I think it was purposeful.

Now, this raised my eyebrows because I hadn't heard about this tidbit; when I asked for clarification, Spiro responded:

there was some mixup - McConnell staff blaming Cruz staff and vice versa. All staged.

Note: The following notes are mostly cribbed from Larry Levitt of the Kaiser Family Foundation via Twitter, plus a few from other folks or tidbits I dig up myself...

Behold with Wonder as Ted Cruz & Mike Rounds use Magic Freedom Math to transform 18 into 3!

Last week, and then earlier today, I crunched some more numbers (with a big assist from the Kaiser Family Foundation) to figure out just what the impact of Ted Cruz's "Consumer Choice" #BCRAP amendment would be on the individual market, and the results weren't pretty. Here's what it boiled down to (rough estimates for all numbers):

n other words, Kaiser estimates the breakout of the individual market as something like this:

In which Congressional Dems formally propose 3 of my 20 recommendations

Over at Vox, Sarah Kliff has a nice exclusive:

A small group of Democratic legislators will do something unusual Wednesday morning: hold a press conference to talk about the parts of Obamacare that are broken.

Ten House Democrats will unveil a new plan to fix Obamacare, highlighting the parts of the law that have struggled to work and offering modest steps to improve them. The proposal includes more funding to help insurance plans cover the sickest patients, along with possibly changing the timing of the open enrollment season in hopes of attracting more Americans to sign up for insurance.

These Democrats are agitating for a new strategy, one where they speak openly about the health law’s weak spots — particularly the individual market — and how to shore them up. The party has so far been reticent to highlight Obamacare’s problems at a moment when Democrats are fighting against Republican efforts to repeal parts of the law.

A shout-out to Jeremy Johnson for the heads up: The Montana Commissioner of Securities & Insurance has released their preliminary 2018 rate requests for the individual and small group markets...and it's pretty darned straightforward. As a nice bonus, they even saved me the trouble of digging up the effected enrollee numbers. In fact, the only critical data missing are the "Part II Justification" files, which hopefully clarify how the CSR payment/mandate enforcement situation plays into these requests.

Judging by the requests, it looks like at least 2 of the 3 on the individual market are assuming that CSR payments will continue and the mandate penalty will be enforced. As for the third (BCBSMT), they're asking for a 23.1% rate hike, so I honestly don't know whether that includes the TrumpTax or not. For the moment I'll assume it doesn't, but will change this later if I'm wrong about that. 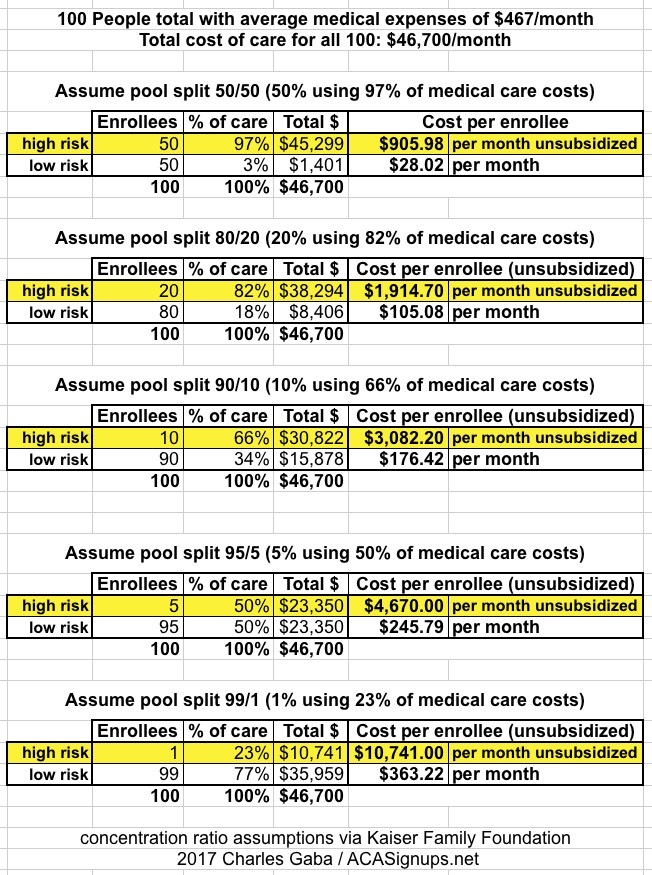