Key Highlights of the 2021 Special Enrollment Period (SEP) through July 31:

Impacts of the American Rescue Plan Act of 2021 (ARP):

The Centers for Medicare & Medicaid Services (CMS) reports that over 2.5 million Americans have signed up for health insurance as of July 31, 2021, through HealthCare.gov and State-based Marketplaces (SBMs), combined, since the start of the 2021 SEP made available in all Marketplaces. Consumers in states with an SBM made 723,000 plan selections since the start date of each state’s SEP through July 31, 2021. (See glossary for more information on SBMs.)

As I've noted before, it's important to note that CMS is reporting the net number of new enrollees after subtracting those who either never actually pay their first premium or who have their policies terminated for other reasons (inability to prove legal U.S. residency, etc.). The exact total as of 6/30 was 1,522,283; as of 7/31 it stood at 1,832,229, a difference of 309,946. This means roughly 94,000 more people who selected Qualified Health Plans (QHPs) between 2/15 - 7/31 were purged from the total. It's a good thing that CMS is doing this when possible, as it makes for a more accurate measure of how many people are enrolling in ACA policies.

Cumulatively throughout the 2021 SEP, this purging looks like so:

All told, that's roughly 318,000 QHP selections "purged" out of 2.15 million total from 2/15 - 7/21, or about 14.8%. Typically around 10% of those who select QHPs never end up paying their first premium in the first place, and there's always some net attrition as enrollees move off of exchange plans by aging onto Medicare, having an income drop and moving to Medicaid, or (in the case of the current economic recovery) shifting back to employer-sponsored healthcare coverage, which is where a lot of these folks came to the ACA exchange from in the first place.

In other words, this is perfectly in line with expectations.

As for the daily average, here's what that looks like (after subtracting the purged QHP selections):

As I expected, there was a slight uptick in the final full month, likely due primarily to the ARP's Unemployment Benefit finally going live at HC.gov.

Remember, most states still have another 5 days to sign up for the Special Enrollment Period to get covered for the rest of 2021!

The number of new plan selections through HealthCare.gov, from the start of the SEP on February 15, 2021 through July 31, 2021, represents a substantial increase in enrollment from the same period in 2020 and 2019, when 713,000 and 521,000 consumers signed up for Marketplace coverage, respectively.2 In previous years, SEPs were available primarily only for qualifying life events, whereas this year the Biden-Harris Administration opened a SEP available on HealthCare.gov, in response to the COVID-19 Public Health Emergency.

This is broken out by state below, as always.

Under the American Rescue Plan Act of 2021 (ARP), most consumers are now eligible for more generous APTC, which further reduce the portion of monthly premiums paid by consumers. Since HealthCare.gov implemented the expanded APTC amounts on April 1, 2021, 2.6 million consumers have returned to the Marketplace and reduced their monthly premiums after APTC by 39 percent, from $105 to $63, on average, and 30 percent (784,000) of returning consumers newly selected plans for $10 or less per month after APTC.

The tables below provide additional details on SEP activity and plan selections in HealthCare.gov states: 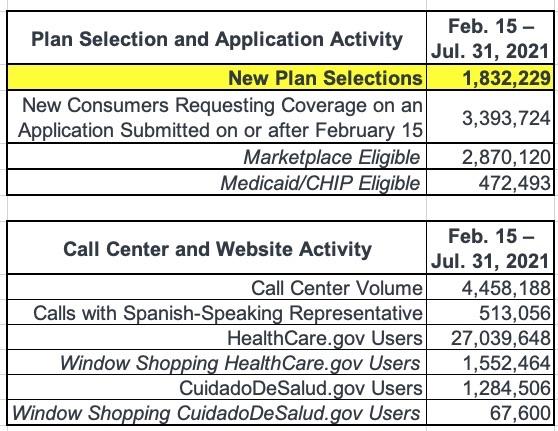 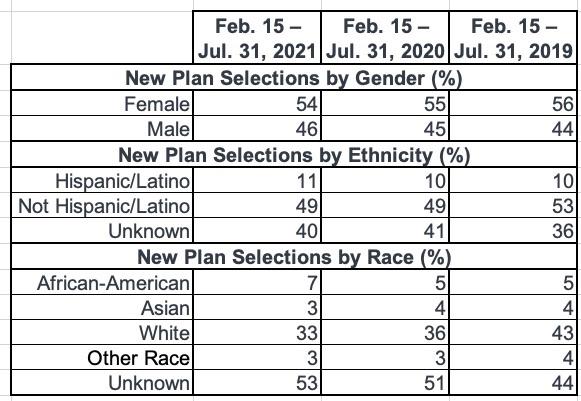 I've reposted the HC.gov state-by-state breakout below, with the additional columns showing the percent increase in SEP enrollment over the same time period from 2019 & 2020. As always, 2019 is really the best "apples to apples" comparison, since that was completely pre-COVID: 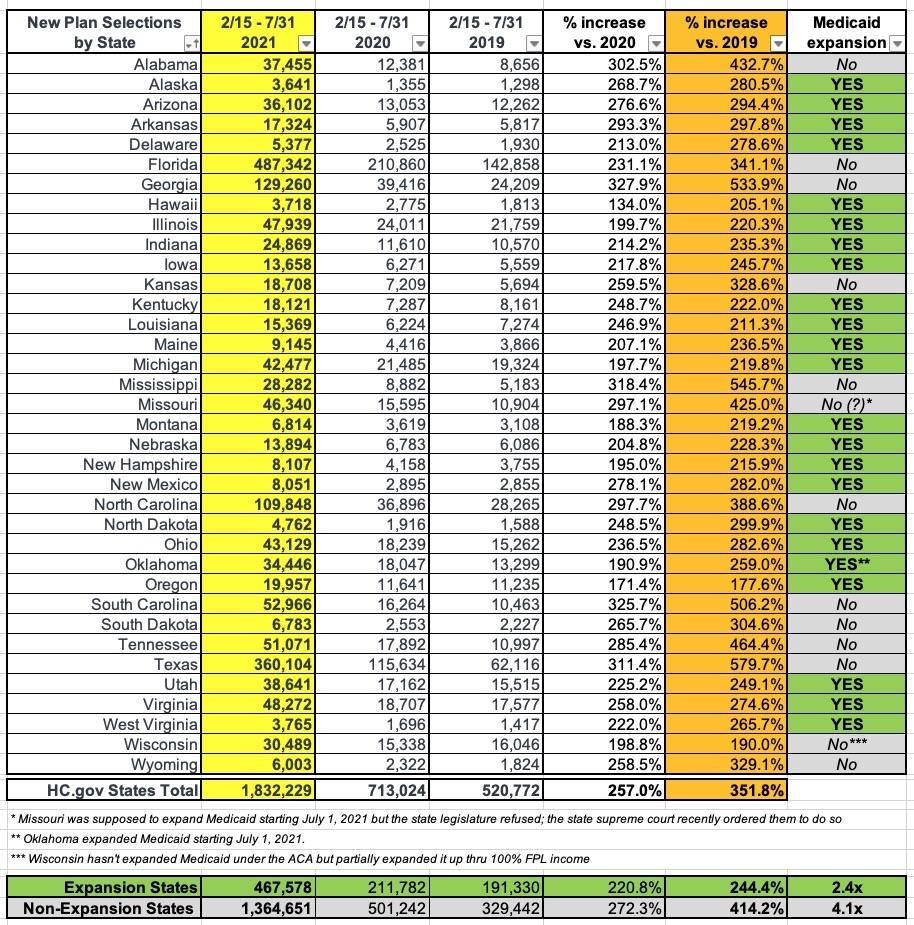 Across all 36 states, SEP enrollment is 3.5x higher than for the same period in 2019, and 2.6x higher than in 2020, showing the power of re-opening enrollment but mostly of the massively expanded/enhanced premium subsidies under the American Rescue Plan.

On average, states which have expanded Medicaid have seen SEP enrollment rates 2.4x higher than they were for the same time period in 2019, while non-expansion states are up more than 4.1x over 2019. The reason for this is the 100 - 138% FPL "overlap" population: In expansion states, those earning up to 138% FPL are shifted over to Medicaid instead, but in non-expansion states, those earning more than 100% FPL are eligible for $0 premium ACA exchange plans (again, thanks to the ARP).

As for the 723,000 state-based exchange enrollees, the press release doesn't break these out by state (unfortunately), and it also clarifies that the starting and ending dates don't necessarily quite match up with when some states started their own Special Enrollment Periods:

State-based Marketplace (SBM) States: This report refers to the 15 states with that use their own platforms for the 2021 coverage year. With some exceptions, SBMs reported new plan selection data to CMS on the number of unique consumers who didn’t have an active enrollment as of the start of the SBM’s SEP, and made a plan selection on or after the SBM’s SEP, that is active as of the end of the reporting period. Idaho’s data is reported from March 1 to April 30, 2021 and Massachusetts’s data is reported from February 1 to July 23, 2021. The end dates for both these states represent the closing date of their SEPs. In addition, some SBMs had SEP start dates prior to 2/1 for which this data does not account. Please contact the SBMs for additional information on this data metric.

That leaves nearly half the SBM total (~356,000) unaccounted for, though I assume most of that is in California and New York, with the rest scattered throughout the other SBM states.

So, what does this mean for the final SEP push (again, it runs through 8/15 in most states)?

Well, it's hard to say, but I'd imagine it'll be a bit higher than the last week of July. That would mean something like ~220,000 more QHP selections via HC.gov states, and perhaps another 85,000 or so via the state-based exchanges (assuming they still make up roughly 28% of the national total). If so, that would put the final 8/15 tally at around 2.86 million new enrollees during the 2021 COVID SEP nationally (~2.05 million via HC.gov, ~808K via the SBMs).