Note: A few weeks ago, I ran a rough back-of-the-envelope extrapolation of partial data from the first 2 weeks of the ongoing COVID Special Enrollment Period and concluded that IF enrollment via the 36 HealthCare.Gov states was representative nationally, and IF the pace of the last 2 weeks of February held perfectly steady, it would mean around 666,000 new enrollees via HC.gov and 832,000 nationally by the end of March. Those were two pretty big caveats, of course, and as you'll see below, the reality wasn't quite as eyebrow-raising, though it's still pretty impressive.

This just in via the Centers for Medicare & Medicaid Services (CMS):

The Centers for Medicare & Medicaid Services (CMS) report that over 528,000 Americans signed up for health insurance from the start of the 2021 Marketplace Special Enrollment Period (SEP) for consumers in HealthCare.gov States through March 31, including approximately 322,000 signups from March 1 to March 31.

The number of people signing up for health insurance from the start of the SEP opportunity on February 15 through March 31 represents a substantial increase from 2020 and 2019, when 209,000 and 171,000 consumers signed up for health insurance respectively.[1] In previous years, SEPs were available only for qualifying life events, whereas this year the Biden Administration opened a SEP to all Americans in response to the COVID-19 Public Health Emergency.

Data suggest a more diverse set of American consumers are enrolling in health insurance coverage through the SEP. Of enrollees who identified a race from February 15 through March 31, 17% identified as Black, compared to about 11% during the same period in both 2020 and 2019. In addition, lower income Americans represent a larger percentage of new plan selections so far during the SEP compared to prior years. Among consumers requesting financial assistance, 41% have a household income between 100% and 138% of the federal poverty level, compared to 38% in 2020 and 33% in 2019.

Definitions and details on the data are included in the glossary at the end of the report.

Here's the data across all 36 HC.gov states: 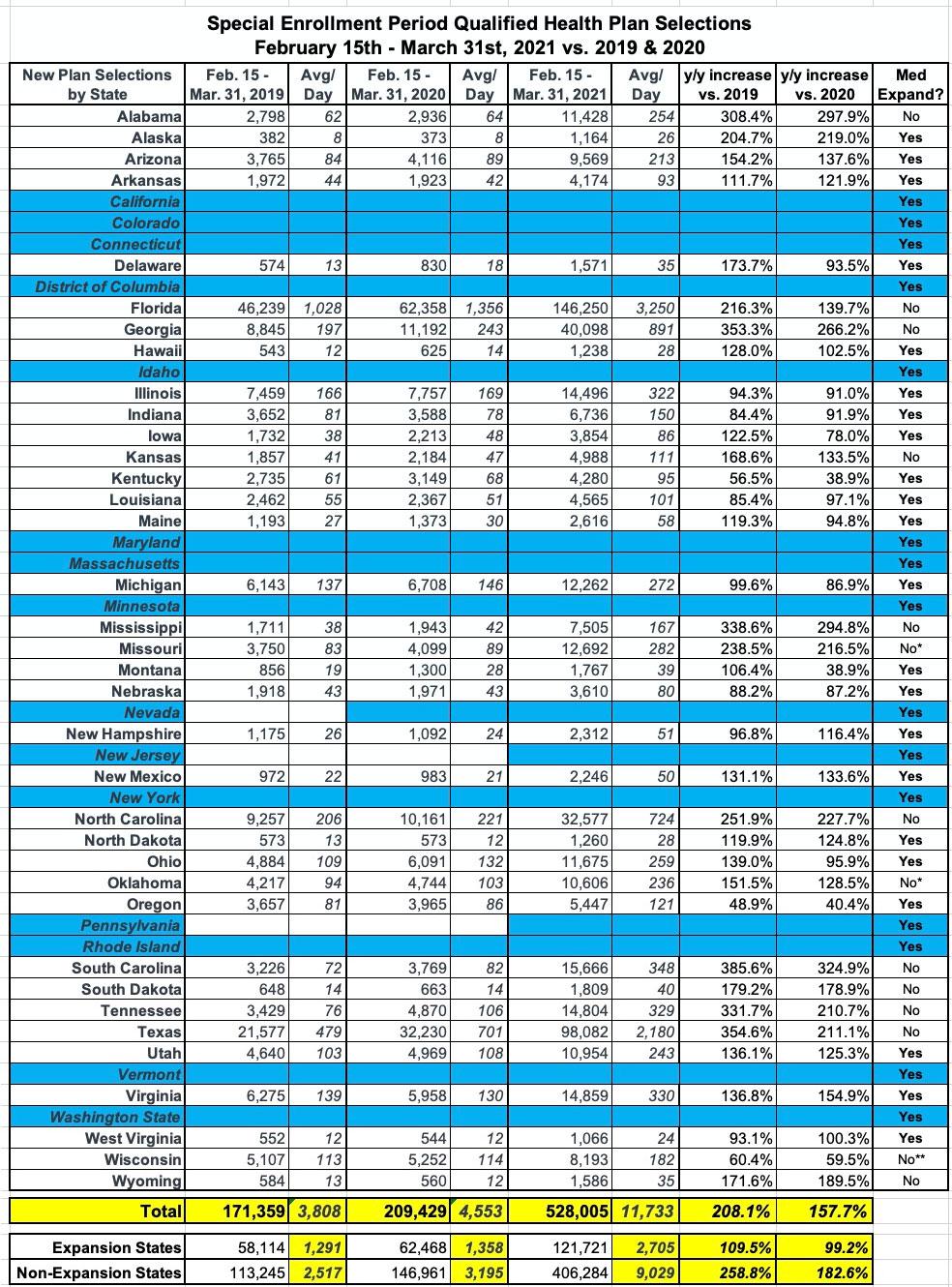 As you can see, total SEP enrollment for the full 2/15 - 3/31 period for the same states averaged 3.1x higher compared to 2019, and 2.6x higher compared to 2020. 2019 is the more accurate year to compare against if you're looking at the pre-COVID era, since the last 2 weeks of March 2020 almost certainly included a significant spike in traditional SEP enrollment due to people starting to lose their jobs as pandemic shutdown policies started to take hold.

Technically, 2021 SEP enrollment is running 2.8x higher than the average of 2019 & 2020 combined, but if you take that late-March COVID surge from last March into account, it's more like 3x higher than under normal circumstances, or roughly 11,700/day across the 36 HC.gov states.

There's some other important things to keep in mind:

In other words, I strongly suspect that while the first six weeks of the 2021 COVID SEP saw 3x as many people #GetCovered as you'd typically expect during the same time period, the second six weeks could easily be 4x - 5x higher.

Oh yeah, one more thing: Last summer I debunked the Trump Administration's defense of not opening up a COVID SEP by noting that...

CMS is bragging about how normal SEP enrollment is still up 188,000 people from 2019 even without an "open" COVID-19 SEP being offered, so everyone should STFU and leave them alone already.

The problem with this is that, as I noted earlier, if CMS had offered a 60-day "open" COVID SEP this spring, they likely would have enrolled up to 630,000 more people. There's some overlap between these numbers, of course, since some of those who are eligible for a normal SEP would have "used" the COVID SEP instead if one had been offered...but even if every one of those 188,000 people did just that, I'd estimate that at least 440,000 more would have utilized the COVID SEP on top of this.

Today's HC.gov SEP report only includes 45 days. If you take my 630K estimate from a year ago and lop it down from 60 to 45 days, it'd be roughly 473,000 new HC.gov enrollees over the same time period. Just saying.

Wisconsin is, as always, a special case: They haven't technically expanded Medicaid under the ACA, but they have expanded traditional Medicaid up to the 100% FPL threshold.