This just in from CMS...

Today, U.S. Department of Health and Human Services (HHS) Secretary Xavier Becerra announced that nearly 940,000 Americans have signed up for health insurance through HealthCare.gov as a result of the Biden Administration’s Special Enrollment Period (SEP) for the COVID-19 Public Health Emergency. The 2021 SEP, along with the additional financial assistance afforded by the American Rescue Plan (ARP), offers individuals and families an opportunity to take advantage of reduced premiums, increased savings, and quality, affordable health coverage through HealthCare.gov.

Since HealthCare.gov implemented the ARP’s expanded advance payments of premium tax credits amounts on April 1, nearly 2 million current enrollees have returned to the Marketplace and reduced their monthly premiums by over 40 percent, from $100 to $57, on average after premium tax credits. We encourage all current HealthCare.gov enrollees to return to the Marketplace to see if they too qualify for more increased financial assistance.

“Families and individuals are signing up for high-quality insurance that the American Rescue Plan made more affordable,” said HHS Secretary Becerra. “Across America there is a need and demand for high-quality, low-cost health insurance. That’s why we are doing all we can to reach people who need coverage. Americans who need health coverage to start as soon as June 1 should visit HealthCare.gov or CuidadoDeSalud.gov today to see what health plans are available to them. A few moments of your time are all that it takes for you to save your family money, get better care, and have peace of mind.”

Huh. As Andrew Sprung just pointed out to me, the line about the median deductible for new enrollees seems a bit strange; it's the median, not the average, which makes a big difference of course, and while the $450 only includes the ~528K who enrolled prior to 4/01, I don't know if the $50 refers to only those who enrolled after 4/01 or to all 940K. Confusing.

Now until August 15, 2021, consumers who want to enroll in coverage, compare plan offerings, or see if they qualify for more affordable premiums can visit HealthCare.gov or CuidadoDeSalud.gov to view 2021 plans and prices and enroll in a plan that best meets their needs. Current enrollees should review their application, make any changes needed to their current information, submit their application, and select a new plan, or reselect their current plan, to receive the increased premium tax credits to make their 2021 Marketplace coverage more affordable. Consumers who take action in May and confirm updated savings on the plan of their choice will start receiving the savings and lower costs starting with their June 1 premiums.

Consumers who want to enroll in coverage and see if they qualify for more affordable premiums can visit HealthCare.gov or CuidadoDeSalud.gov to view 2021 plans and prices and enroll in a plan that best meets their needs. Consumers can also call the Marketplace Call Center at 1-800-318-2596, which provides assistance in over 150 languages. TTY users should call 1-855-889-4325. Consumers can also find a local assister or agent/broker in their area.

Consumers who live in a state that operates its own Marketplace platform should visit their state Marketplace website or call center for more information about when these additional savings will be available through their State-based Marketplace.

The Centers for Medicare & Medicaid Services (CMS) reports that 940,000 Americans have signed up for health insurance through HealthCare.gov since February 15, the start of the 2021 Marketplace Special Enrollment Period (SEP) opportunity, through April 30, with approximately 469,000 consumers signing up for health insurance in the month of April.

The number of new plan selections from the start of the SEP opportunity on February 15 through April 30 represents a substantial increase in enrollment from the same period in 2020 and 2019, when 391,000 and 266,000 consumers signed up for Marketplace coverage, respectively. In previous years, SEPs were available primarily only for qualifying life events, whereas this year the Biden-Harris Administration opened a SEP to all Americans in response to the COVID-19 Public Health Emergency.

Under the American Rescue Plan (ARP), most consumers are now eligible for more generous advance payments of premium tax credits (APTC), which further reduce monthly premiums. Since HealthCare.gov implemented the expanded APTC amounts on April 1, approximately 1.9 million consumers have returned to the Marketplace and reduced their monthly premiums after APTC by over 40 percent, from $100 to $57, on average.

Remember, all eligible current ACA enrollees will receive the expanded subsidies eventually...it's just a question of whether they get them monthly for the rest of 2021 or whether they get it all in a lump sum when they file their 2021 taxes next spring.

8.25 million people enrolled via HC.gov states during the 2021 Open Enrollment Period, and at least another 471,000 were added via SEP between 2/15 - 3/31 (see below). When you take attrition into account, that likely means around 7.9 million current HC.gov enrollees who enrolled prior to the expanded subsidies going live. That means around 24% of current enrollees have actively gone in and updated their accounts so far.

Some of the state-based exchanges are updating the subsidy formula for current enrollees automatically; some require it be done manually for now but plan on auto-updating everyone else's later this summer, and so forth, so it's kind of a mixed bag. 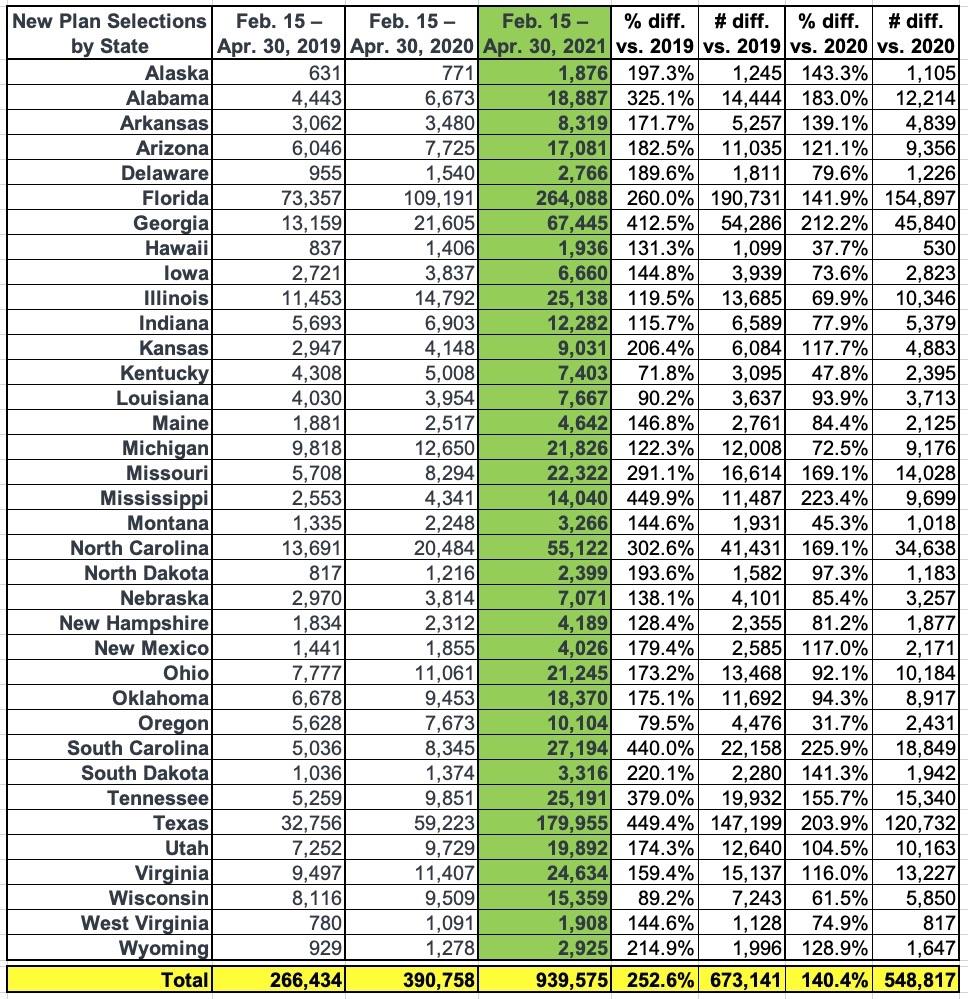 So far, total SEP enrollment is up 3.5x over the same time period in 2019 (the fully pre-COVID era) and up 2.4x over 2020 (the COVID pandemic was in full force, but HC.gov didn't open a "wide open" SEP last year, nor were there any expanded subsidies).

This is where the data cleanup comes into play:

New Plan Selections: The number of unique consumers who didn’t have an active enrollment as of February 14, and made a plan selection on or after February 15, that is active as of the end of the reporting period. An active plan selection is one that is non-cancelled with an end date of December 31. While this plan selection metric is net of cancellations and terminations that occur during the reporting period, it doesn’t represent effectuated enrollments because reconciliation activity may continue in later periods.

I'm not sure if the 57,000 drop includes existing enrollees (i.e. those who had enrolled during Open Enrollment) or if it's people who signed up earlier in the SEP but then changed their minds or dropped coverage only a month or two after their mid-year coverage effectuated. This may sound strange but there's actually a lot of churn on the ACA market month to month.

...nor are the enrollments for the other 11 states or DC. Assuming HC.gov enrollments make up roughly 72 - 75% of all SEP enrollments nationally, I estimate that 1.25 - 1.3 million people have likely enrolled during the COVID SEP nationally to date.

UPDATE: I forgot to account for the fact that all 15 of the state-based exchanges have expanded Medicaid, which has a dramatic impact on ACA exchange enrollment. In addition, most of the state exchanges didn't officially enable the expanded subsidies until later than April 1st; California didn't make them available until April 12th, Connecticut didn't start until May 1st, and Washington State didn't bring theirs live until today!

With all of this in mind, the 940K figure above probably represents more like 80% of all SEP enrollments so far, which would make the national total as of 4/30 more like 1.1 - 1.2 million.

[3] Individuals are generally identified in this report as eligible for either a QHP or Medicaid/CHIP, but there are cases where a consumer is considered eligible for both types of coverage or neither. As a result, the eligibility breakouts do not sum to the total number of consumers requesting coverage on applications submitted.