Note: I'm waiting for confirmation of what I thought I heard yesterday.

On Wednesday evening, I joined a webinar hosted by the White House's Office of Public Engagement highlighting yesterday's announcement by CMS that the enhanced ACA subsidies provided by the American Rescue Plan have helped over 2.5 million current ACA exchange enrollees via HealthCare.Gov reduce their net premiums by 40% on average.

The larger point of the webinar (and yesterday's press release by CMS) was, of course, to call attention to the fact that the ongoing Special Enrollment Period only has ONE MORE WEEK TO GO in most states, so anyone not currently insured should move quickly to take advantage of the extra savings for the rest of 2021 (including those who've received or are receiving unemployment benefits this year, who qualify for $0-premium plans).

The webinar was pretty short (partly due to some technical problems) and didn't really reveal much in the way of new information, but there was one comment which caught my attention. At one point, I'm pretty sure the host (I didn't catch her name, I'm afraid) mentioned that lasts week, HealthCare.Gov had its "second-highest number of new enrollees to date during the 2021 Special Enrollment Period."

Unfortunately, CMS hasn't posted their July SEP enrollment report for HC.gov yet; that probably won't come out until next week. However, this lends some insight...if accurate.

I've contacted the OPE to confirm that she did in fact say this, but that's a pretty specific data point (I mostly want to make sure she didn't say the site had the 2nd-highest number of visitors or whatever, which wouldn't mean a whole lot in actually enrollment data).

Assuming I heard her correctly, let's look at the Qualified Health Plan (QHP) enrollment data for HealthCare.Gov that we have for the SEP to date:

The SEP didn't start until February 15th, so there's only 14 days there (2 weeks). Here's what the weekly average for each month looks like from mid-February through the end of June: 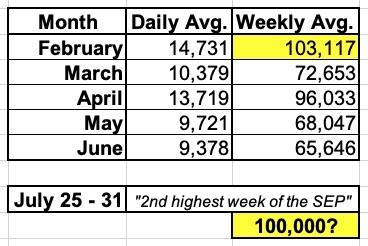 If 7/25 - 7/31 did have the "2nd-highest weekly number of new QHP enrollees" during the SEP so far, that should put it at somewhere around 100,000 QHPs, give or take...second only to either the third or fourth week of February.

As for the rest of July, I'm going to assume it averaged somewhere around May's daily average. The addition of the ARP's Unemployment Benefit starting on July 1st likely boosted enrollment, which should have more than cancelled out the otherwise downward trend (it becomes increasingly more difficult to get people to commit to full-year deductible/out of pocket expenses when you're more than halfway through the year, and the economic recovery means that more people are presumably returning to employer-based coverage anyway).

Of course this is pretty back-of-the-envelope speculation; the actual number could be significantly higher or lower. Hopefully we'll find out soon.

Also, as always, remember that everything above refers to the federal exchange only; the 15 states which operate their own ACA exchanges comprise roughly 29% of the 2.1 million QHP selections nationally as of the end of June. A couple of state-based exchanges have already terminated their own SEPs (Idaho, Minnesota and Massachusetts), but the rest are still chugging along, so assuming a similar ratio for July, that would put the monthly total at around 475,000 nationally, for a grand total of roughly 2.57 million or so as of July 31st.