BREAKING: CMS announces over 2.1 million SEP enrollments nationally via SEP; you can still #GetCovered thru 8/15!

The previous CMS Special Enrollment Period report put the HC.gov total at 1.24 million via HC.gov as of the end of May, slightly exceeding my own projection. In addition, I had already confirmed at least 400,000 additional SEP enrollments via the 15 state-based ACA exchanges, for a total of at least 1.6 million nationally as of the end of May.

I didn't make any specific projection for the end of June as I've been swamped with my COVID vaccination tracking project, though I generally expected the enrollment pace to drop off significantly (anyone enrolling in June didn't have their policy kick in until July 1st, meaning their deductible & out-of-pocket cap would be the same even though they're only getting 6 months to use them up). Several hundred thousand more was a reasonable assumption, which would probably bring the national total up to somewhere in the 2 million range.

Well, this morning CMS issued an updated report through the end of June, and sure enough:

Today, the Centers for Medicare & Medicaid Services (CMS) released new enrollment reports showing more than two million people have signed up for health coverage during the Biden-Harris Administration’s 2021 Special Enrollment Period (SEP), which opened on February 15, 2021 as the country grappled with the pandemic, and will conclude on the extended deadline August 15, 2021. In addition, today’s reports show access to health care continues to expand with 81 million people receiving coverage through Medicaid and the Children’s Health Insurance Program (CHIP) as of February 2021. The historic and rising enrollments demonstrate how the Affordable Care Act, Medicaid, and other vital health care programs deliver high-quality, affordable health care to millions of Americans, families, and children.

The June Marketplace SEP report shows that since February 15, 1.5 million Americans have signed up on HealthCare.gov with an additional 600,000 enrolling in coverage through the 15 State-based Marketplaces. The report also shows that of the new and returning consumers who have selected a plan since April 1, 1.2 million consumers (34%) have selected a plan that costs $10 or less per month after the American Rescue Plan’s (ARP) premium reductions. The ARP’s expanded premium tax credits have reduced premiums, increased savings, and given consumers access to quality, affordable health care coverage through the Marketplace, and President Biden has proposed to make these lower premiums permanent as laid out in his Build Back Better Agenda.

The 600K figure is actually higher than the number mentioned by Sec. Becerra this morning (he put it at "around 500K"). That means the grand total nationlly is actualy over 2.1 million.

“Let’s be clear – the monthly Marketplace numbers show that across the country, there’s a demand for high-quality, low-cost health coverage. And month after month, we are reminded that the Biden-Harris Administration is fulfilling its promise to deliver access to quality, affordable health coverage by strengthening the Affordable Care Act and pushing its Build Back Better Agenda,” said HHS Secretary Xavier Becerra. “Whether through expanded Medicaid or the Health Insurance Marketplace, the ACA is working for millions of Americans – and we’re committed to building on this historic progress.”

"The American Rescue Plan has made health coverage more affordable and accessible than ever – and people are signing up. Health coverage provides the peace of mind that every American deserves," said CMS Administrator Chiquita Brooks-LaSure. "Through August 15, the American people have an opportunity to select a quality health care plan that works for them, with costs that are at an all-time low. CMS is dedicated to ensuring people in our communities have the coverage they need.”

Consumers who want to compare plan offerings, or learn if they qualify for more affordable premiums can check their coverage options by visiting HealthCare.gov or CuidadoDeSalud.gov by August 15. Consumers can view 2021 plans and prices and submit an application to see if they are eligible for coverage and financial assistance. If eligible, they can enroll in a plan that best meets their needs. Current enrollees should review their application, make any changes needed to their current information, submit their application, and then select a new plan, or reselect their current plan, to receive the increased savings under the ARP.

Throughout the year, consumers can apply for Medicaid and CHIP coverage online in all 50 states and DC, and the majority of states complete real-time determinations and automated renewals. All but 13 states have accepted federal funding to expand Medicaid under the ACA.

Consumers who live in a state with a Marketplace that operates its own platform should visit their state Marketplace website or call center for information on accessing these additional savings through their State-based Marketplace.

Here's the actual HC.gov enrollment report...unfortunately it doesn't include a breakout of the 600K state-based exchange numbers, but it includes a lot of other important data:

The Centers for Medicare & Medicaid Services (CMS) reports that over 1.5 million Americans have signed up for health insurance through HealthCare.gov since February 15, 2021, the start of   the 2021 Marketplace Special Enrollment Period (SEP) opportunity became available through HealthCare.gov, through June 30, 2021; with 373,000 consumers signing up for health insurance in the month of June.

The number of new plan selections, from the start of the SEP opportunity on February 15, 2021 through June 30, 2021, represents a substantial increase in enrollment from the same period in 2020 and 2019, when 625,000 and 443,000 consumers signed up for Marketplace coverage, respectively. In previous years, SEPs were available primarily only for qualifying life events, whereas this year, the Biden-Harris Administration opened a SEP available on HealthCare.gov in response to the COVID-19 Public Health Emergency.

That's 3.44x as many people enrolling via SEPs during the same time period in 2019 (which is the only year you can use to compare against the pre-COVID era). It's also 2.43x as many as the same time period in 2020, when we were in the thick of COVID...except for two major differences: First, HC.gov did not offer a COVID SEP last year (most of the state-based exchanges did); second, that was also before the expanded/enhanced subsidies of the American Rescue Plan.

This is actually a good thing; it means the data being presented represents the actual number of SEP enrollees as cleanly and accurately as possible. They did the same thing in the April and May reports as well.

Under the American Rescue Plan Act of 2021 (ARP), most consumers are now eligible for more generous advance payments of premium tax credits (APTC), which further reduce the portion of monthly premiums paid by consumers. Since HealthCare.gov implemented the expanded APTC amounts on April 1, 2021, 2.5 million consumers have returned to the Marketplace and reduced their monthly premiums after APTC by      40 percent, from $104 to $62, on average, and 30 percent (735,000) of returning consumers newly selected plans for $10 or less per month after APTC. 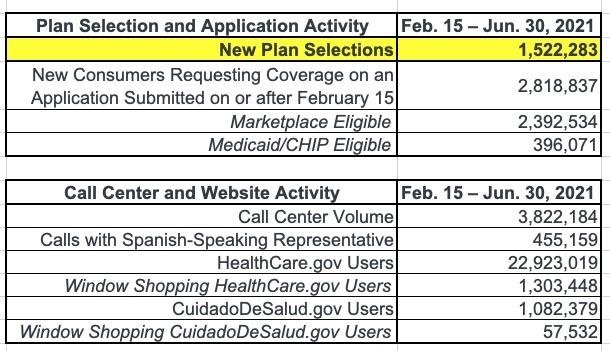 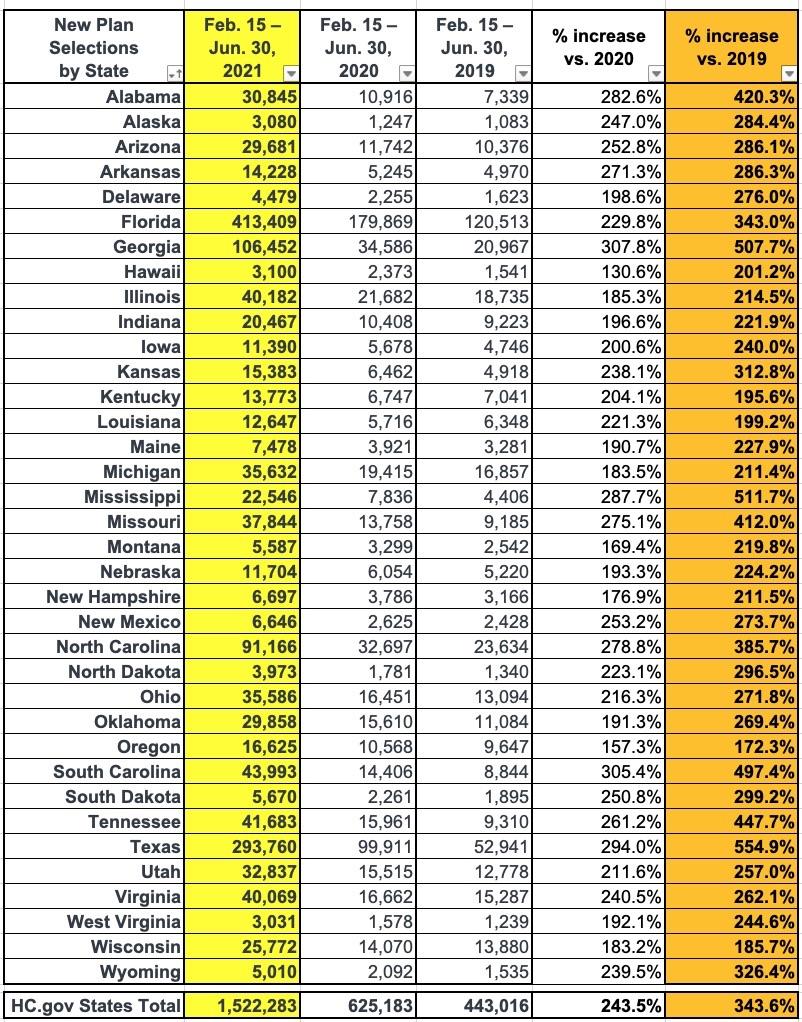 As Andrew Sprung and I have noted several times before, the biggest determining factor for how much SEP enrollment has increased this year over prior years is whether the state has expanded Medicaid under the ACA: 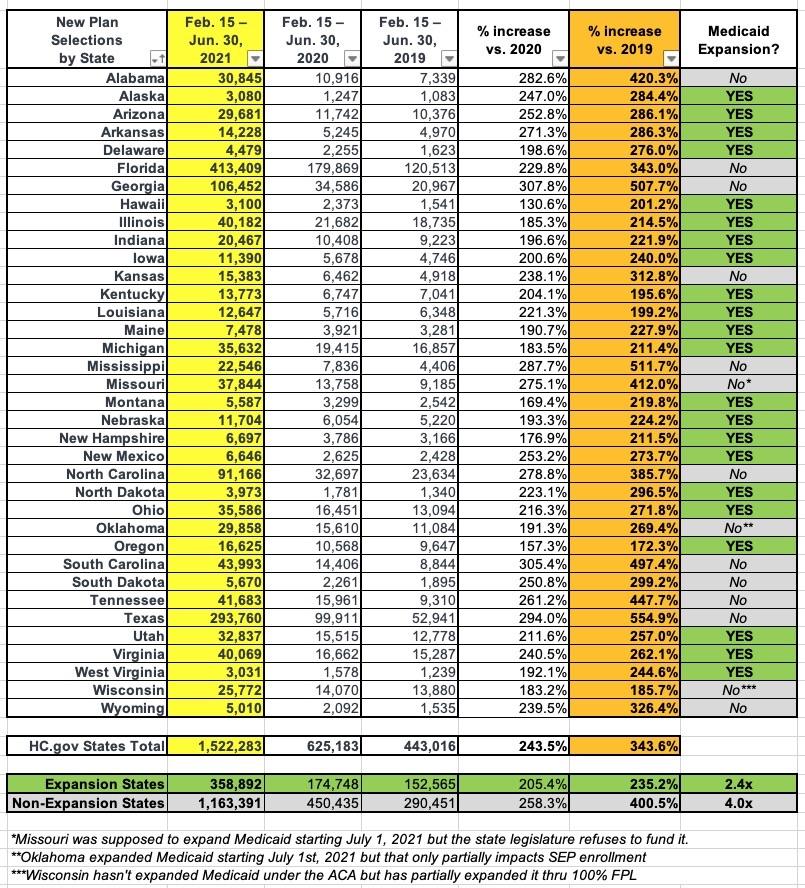 Of the 36 states hosted by HealthCare.Gov, 22 of them have ACA Medicaid expansion (Missouri and Oklahoma both passed expansion ballot proposals last year, but Missouri's GOP legislature is refusing to fund it and Oklahoma didn't actually launch theirs until July. That leaves 13 non-expansion states.

As noted in the press release, they also include some demographic breakouts of the HCgov data, including gender, ethnicity and race: 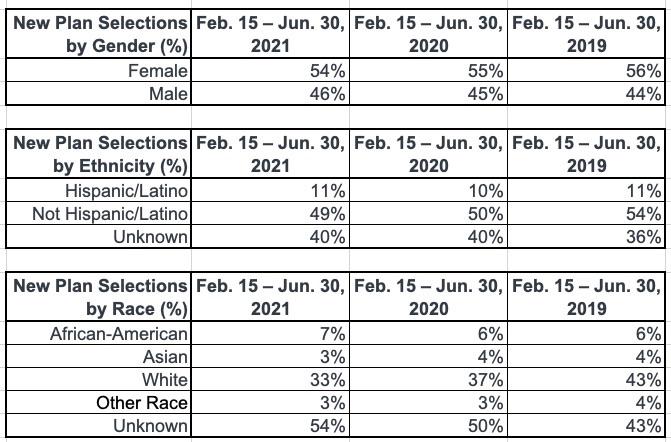 Finally, they provide breakouts of the "$10 or less" net premium enrollment: 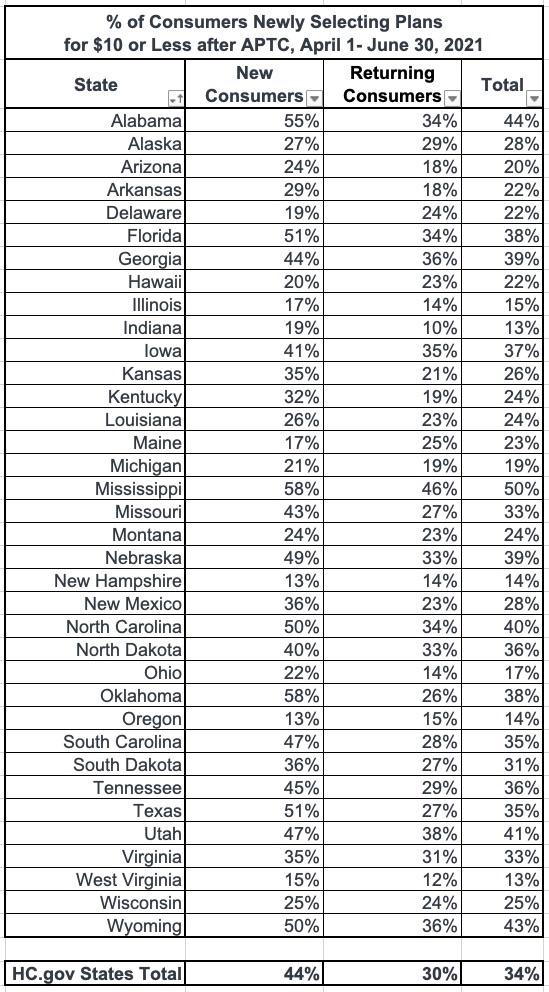 Also worth noting is the per-day enrollment pace during the SEP, both prior to and after the American Rescue Plan (ARP) subsidies went live on HC.gov:

However, each of these is cumulative (and each also includes purging of those who never actually paid/etc). When you break it out by month you get:

I'm actually a bit surprised that the June average only dropped off around 3.5% from May (again, after adjustments). I expect the enrollment pace to jump back up again for July thanks to the American Rescue Plan's Unemployment Benefit finally going live via HealthCare.Gov.

As an aside: If you add up the per-month QHP selections from each report, it actually totals 1,746,000 as of June 30th...or roughly 224,000 higher. That means around 13% of the total who've selected QHPs via HC.gov since 2/15 either didn't go on to enroll or dropped off after the first month or so. This surprises me...I would've expected the net attrition rate to be lower for this particular SEP, not higher, especially given the expanded ARP subsidies, but whatever.

As for the 600,000 state-based exchange enrollments referred to in the press release, I can account for some of this:

That's a total of 366,795...so there's at least 233,000 more SEP enrollees out there across these states as well as Massachusetts, New Jersey, Rhode Island and Vermont, which I don't have any data for at all so far.