I analysed Kansas' 2019 ACA indy market rate changes back in August. The three carriers were requesting an average increase of around 6.1% (this may be slightly off since I had to estimate the market share for two of the three). State insurance regulators left Blue Cross Blue Shield and Ambetter's rate requests as is, but cut Medica's down by more than half, from a 10.7% increase to just 4.3%:

Premium Rates for Individual and Small Group Markets Individual plan premium rates may vary by age, rating area, family composition and tobacco usage. For example, a person living in Manhattan, KS (rating area 3) may pay a different rate than someone living in Pittsburg, KS (rating area 7) based on the claims data by rating area. A map of the counties included in each rating area is provided on the next page. Kansas is an effective rate review state, which means the actuarial review is conducted by the Kansas Insurance Department. KHIIS (Kansas Health Insurance Information System) claims data is utilized during the rate review process to verify the claims experience submitted by the companies. The following table provides details regarding the average requested rate revisions for companies writing individual policies in Kansas. Rate increases will be partially offset for individuals receiving a premium tax credit. 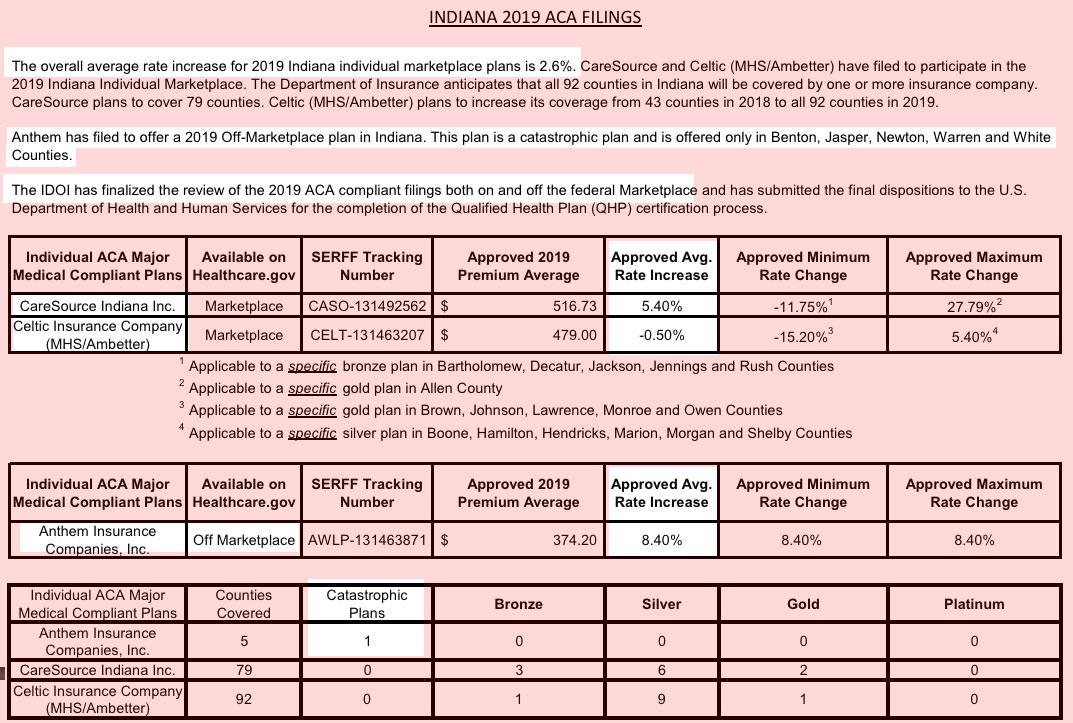 Last month, the Idaho Insurance Department posted the preliminary 2019 ACA individual market rate change requests. They were pretty straightforward, averaging around an 8% increase across the market.

A few days ago, the Idaho DOI issued their final/approved rate changes, knocking a few points off the hikes and bringing the weighted average increase down to 5%:

The Department of Insurance received preliminary 2019 health plan information from insurance carriers on June 1 and began reviewing the proposed plan documents and rates for compliance with Idaho and federal regulations. The Department of Insurance does not have the authority to set or establish insurance rates, but it does have the authority to deem rate increases submitted by insurance companies as reasonable or unreasonable. After the review and negotiation process, the carriers submit their final rate 2019 increase information. The public is invited to provide comments on the rate changes. Please send any comments to Idaho Department of Insurance.

UPDATE: Who Will Do The #SilverSwitcharoo in 2019?

UPDATE 10/30/18: Thanks to some additional reviews/checking by Dave Anderson, Louise Norris, Andrew Sprung and myself, I've been able to update the spreadsheet further; the blog post has also been updated correspondingly.

Last year, while Congressional Republicans were doing everything possible to officially repeal the Affordable Care Act via legislative means, Donald Trump spent months repeatedly threatening to cause the ACA individual market exchanges to either "explode" or "implode" (depending on the day) by, among other things, cutting off Cost Sharing Reduction reimbursement payments to insurance carriers.

With the 2019 Open Enrollment Period quickly approaching, I'm spending a lot of time swapping out the requested carrier rate changes from earlier this summer with the approved rate changes from state regulators.

Hawaii only has two carriers participating in the ACA-compliant individual market: HMSA and Kaiser, which requested rate increases of 2.72% and 28.6% respectively back in August. With a roughly 57/42 market share split, this resulted in a weighted average rate increase of 13.8%, which would likely have been closer to 3.8% if the ACA's individual mandate penalty hadn't been repealed.

Today, however, Louise Norris gave me a heads up to this bulletin from Hawaii's Commerce Department, in which they state that state regulators have chopped those rate hikes down significantly for 2019:

With just 3 weeks to go before the 2019 Open Enrollment Period begins, the dust has mostly settled on my 2019 Rate Hike Project. Over half the states have provided their final, approved individual market premium changes, and while I haven't found the final rates for the other half yet, their preliminary rates are all on record, so I don't anticipate the needle moving too much at this point.

New Hampshire is among the states which I haven't found final rate changes for yet. The three carriers in the state have requested average price reductions of around 13.5% on average, which is well below the 3.2% increase which is the average nationally, but I still don't know what the state regulators are going to approve.

This makes the following press release rather surprising: