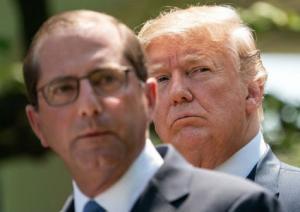 Today at 11am CST (I think that's Noon EST?), HHS Secretary and Donald Trump's Used Car Salesman Alex Azar will give a Big Speech to the Nashville Health Care Council in Tennessee:

Secretary Azar will share news regarding the Affordable Care Act marketplace and reflect on lessons for healthcare reform.

In advance of tomorrow, here are a few excerpts of Secretary Azar’s remarks (as prepared for delivery):

“The previous administration’s major healthcare achievement, the Affordable Care Act, was an attempt to use more government regulation and intervention to improve American healthcare.

“As we all know, the results were disastrous, with skyrocketing costs and disappearing choices.

“But today, I am here to share with you some good news.

“This fall, we have seen these efforts begin to bear fruit, in the form of stable premiums and growing choices.

This is jaw-dropping, spit-take inducing chutzpah and utter bullshit on the part of the Trump Administration.

This is exactly what I wrote about over at healthinsurance.org a few weeks back: The true measure of Republican sabotage of the Affordable Care Act needs to include last year's actions as well as this year's...and in fact, last year's cut-off of CSR funding had the single largest impact on unsubsidized premiums of anything the Trump Administration has done to date.

Again, here's what that looks like in Pennsylvania. 2019 premiums are expected to remain nearly flat compared to 2018 (increasing by less than 1% on average)...but that 2018 average was already a massive increase over 2017...and furthermore, would have dropped by 5.5% if the mandate hadn't been repealed and #ShortAssPlans weren't being expanded. 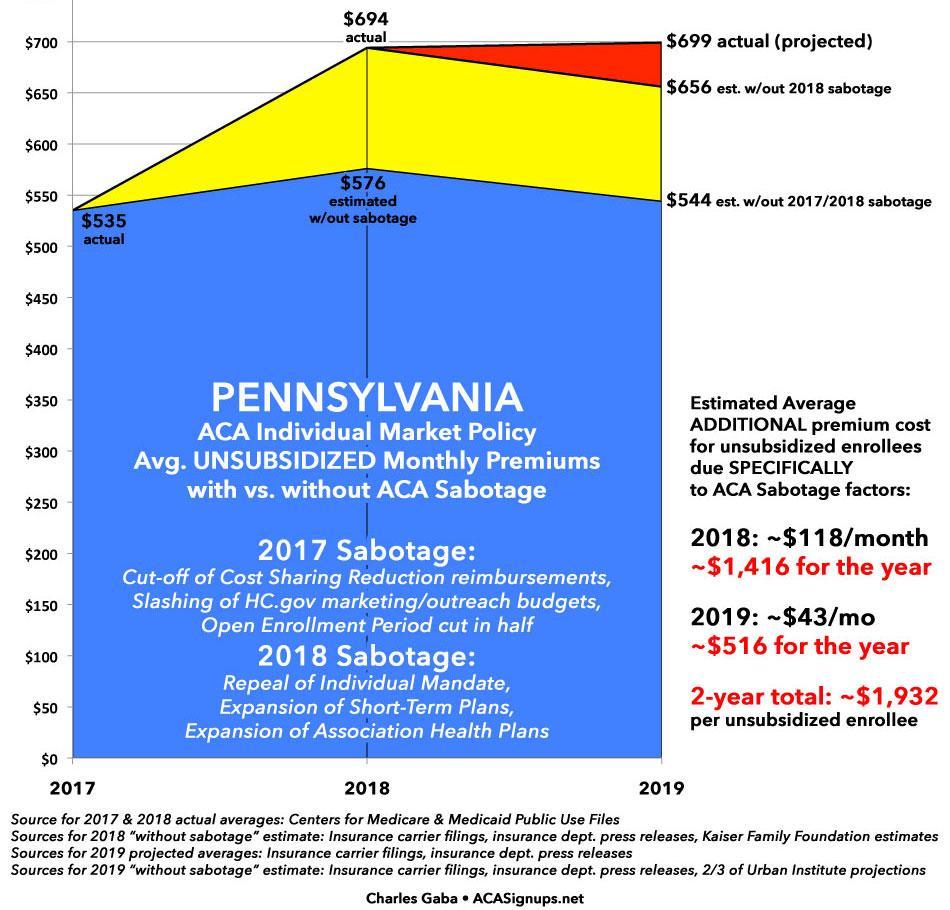 I'm working on similar two-year graphics for every state, for what it's worth...the impact varies widely for both years.

UPDATE: OK, this is from from the full text of Azar's speech:

We now have clear evidence that this is the case. You’ve likely already heard that the premium projections for the federal exchange next year are much more stable.

But we have new breaking numbers that are even better. We are announcing today that, for the very first time under the Affordable Care Act, the premium for a benchmark federal exchange plan is projected to actually drop.

Insurers have proposed to cut premiums for these benchmark plans by 2 percent nationally. Meanwhile, the number of federal exchange insurers will grow for the first time since 2015.

It's important to note those clarifiers before looking at the number itself: "Benchmark" and "federal exchange".

Federal Exchange refers only to the 39 states hosted at HealthCare.Gov. It does not include the 11 states (+DC) which operate their own ACA exchange.

Total Silver plan enrollment across those 39 states represents just 48% of total 2018 ACA exchange enrollment...and again, the benchmark plan is only a single Silver, though admittedly all plans within the same metal level tend to change at roughly the same rate. Furthermore, when you include off-exchange ACA-compliant individual market enrollment, "benchmark plan" enrollment drops even further as a percentage of the whole--enrollment in off-exchange enrollees follows a different pattern than on-exchange; Bronze enrollment tends to make up a significantly higher percentage, for instance. My guess is that overall, Silver enrollment makes up less than 40% of the total market, and "benchmark silver" is likely only around 1/3.

None of this really changes the major thrust of Azar's pitch, mind you; I just wanted to explain the discrepancy between my 3.3% national average increase and Azar's "2% decrease".

Let me repeat that: Under President Trump, premiums are dropping and choices are returning. Here in Tennessee, the proposed benchmark rate will drop by 26 percent—more than a quarter.

Tennessee is a perfect example of what I just referred to. Yes, the benchmark plan will drop an impressive 26%...but overall ACA market premiums are only dropping 11%. Furthermore, the overall average would likely have dropped by a whopping 23% if not for the individual mandate penalty being repealed and #ShortAssPlans being expanded.

...In Maryland, for instance, rates had been projected to rise significantly. But in large part thanks to our approval of the state’s reinsurance program, last week, Maryland’s insurance commissioner announced that rates will now drop by 13 percent.

This, again, is incredibly disingenuous. It's true that Maryland's rates are dropping 13% on average thanks mostly to the reinsurance program, and yes, I do give a small tip of the hat to CMS Administrator Seema Verma...but the reinsurance program is included as a provision within the ACA itself. In other words, Azar is taking a part of the ACA and using it to...bash the ACA. The vast bulk of the work involved in establishing Maryland's reinsurance program waiver (as well as similar programs in other states) was done by the state legislators and governors. For the most part, all Verma did was review the request and give it a thumbs up. Furthermore, premiums in Maryland would have dropped by 18% instead of 13% if Republicans hadn't repealed the individual mandate. Finally, the only reason #ShortAssPlans aren't a negative factor in bumping MD rates up is because the state counteracted them with swift action locking them down.

Oh yeah...Azar also plans on trashing "Medicare for All", of course:

“When you drill down into the details, it’s clear that Medicare for All is a misnomer. What’s really being proposed is a single government system for every American that won’t resemble Medicare at all.

“But under Medicare for All, no one’s even promising that you can keep your plan, or keep your doctor. The main thrust of Medicare for All is giving you a new government plan and taking away your other choices. The problems don’t stop there: As I’ll explain, broadening the Medicare system will undermine the security access seniors currently enjoy, come at a staggering cost to taxpayers, and ignore what seniors are showing they want from Medicare today.”

There's a lot going on in this statement...some of which is kind of, sort of accurate...depending on which version of "Medicare for All" you're talking about.

If you're talking about the Bernie Sanders-style M4A bill, then Azar is absolutely correct about the following claims:

HOWEVER, if you're talking about a Medicare- (or Medicaid) based public option (or a hybrid along the lines of the Center for American Progress's "Medicare Extra" proposal), then no, it wouldn't be a "single, government run healthcare system", it wouldn't take away other choices for most people, and while it would indeed require raising taxes to some degree, it wouldn't be by nearly as shocking an amount.

Seeing how Democrats are just beginning the process of debating which of over a half-dozen different "flavors" of Comprehensive Universal Healthcare Coverage to pursue, Azar's "M4A is the Apocalypse!" speech is fearmongering at its worst, especially coming from the sitting HHS Secretary.