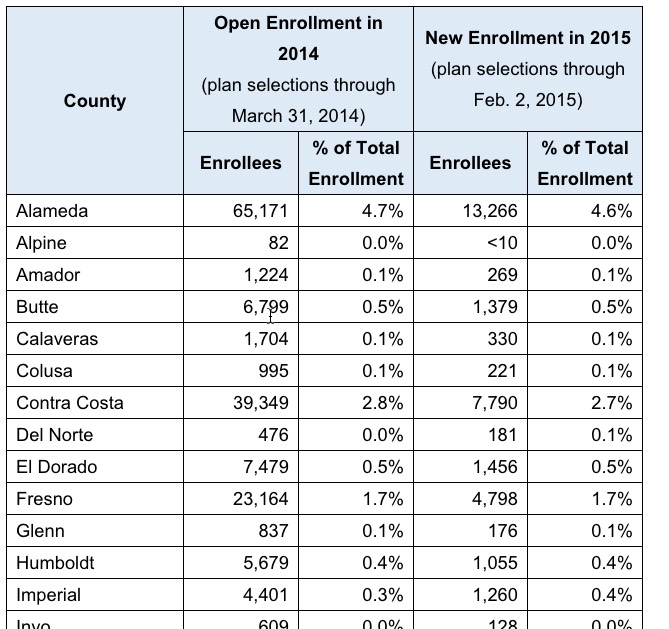 California: I was way off re. *new* enrollees...but not releasing *renewal* data at this point is absurd

Ouch. I was expecting CoveredCA to announce somewhere in the neighborhood of 314K new QHPs for 2015 through Sunday night (the 144K already announced, plus another 170K since 12/15). Instead, the total turned out to be just 217,146. I was way off on this figure, and I'm willing to accept that. In fact, in retrospect, I must've miscalculated something, since the odds of enrolling more new people in the 28 days following the January coverage deadline (which also included the "dead zones" of Christmas Eve, Christmas Day, New Year's Eve and New Year's Day) than the 31 days before that deadline were almost nil.

What I don't find acceptable is that Peter Lee, after promising to release renewal data "in January" is now saying that they may not do so until February.

As I noted the other day, CoveredCA will be releasing (hopefully) completely updated ACA enrollment data, right up through Sunday night (1/11) in about a half an hour. So far they've only said that 144K new QHP enrollees have been added, and even that only includes 11/15 - 12/15. They haven't released any data on renewals of the 1.12 million 2014 enrollees yet, nor have they issued any further updates on new additions since Dec. 15th, 4 full weeks ago.

I've noted several times that I'm expecting them to announce roughly 960K renewals (active + automatic) from California, or around 85% of current enrollees to be renewed/re-enrolled. If that proves accurate, that would bring their 12/15 total up to around 1.1 million. That just leaves the new enrollments since 12/15.

Obviously the real unknown here is the renewal/autorenewal number. If it's fairly close to 85%, I should be pretty close on my total.

As I noted Saturday, CoveredCA is supposedly going to finally release their full, updated ACA enrollment data between now and Wednesday. So far they've only said that 144K new QHP enrollees have been added, and even that only includes 11/15 - 12/15. They haven't released any data on renewals of the 1.12 million 2014 enrollees yet, nor have they issued any further updates on new additions since Dec. 15th, 4 full weeks ago.

I've noted several times that I'm expecting them to announce roughly 960K renewals (active + automatic) from California, or around 85% of current enrollees to be renewed/re-enrolled. If that proves accurate, that would bring their 12/15 total up to around 1.1 million.

California answers my question from 2 days ago: Enrollment update coming up this week

This article pretty mostly is a more in-depth explanation of the Medicaid/Medi-Cal situation in California that I wrote about the other day. However, the final line in the article also addresses my other post from a couple of days ago, asking when the heck CA and NY are going to release updated enrollment data (including renewals from 2014, which should account for around 960K in CA alone):

...New enrollment numbers from Covered California for the rest of December will be released next week, exchange officials said, before the exchange board meets Jan. 15.

Woo-hoo! Today is the 10th, tomorrow is Sunday, so they should be coming out with fully-updated (I hope) data from the largest state in the country sometime between Monday & Wednesday.

Yesterday I publicly declared that total QHP selections nationally had reached the 9 million milestone. I based this on 4 data points:

If you do the math, you'll see that the biggest missing piece here is the 3rd item above: Covered California and New York State of Health have, to date, still refused to give out any re-enrollment/renewal data for 2014 QHP enrollees. Not just autorenewal numbers, but active renewals as well.