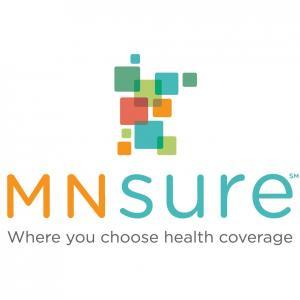 As a result of this unusual arrangement, MNsure took off like a rocket in the opening weeks of the Open Enrollment Period, as people scrambled to sign up ASAP for the first-come, first-serve carriers. They were enrolling people up to 12x faster than last year for awhile, and have already destroyed last year's total enrollment record by signing up over 106,000 people to date (over 25% higher than last year's 83,507 enrollees).

However, this still left a huge problem. 62% of MNsure enrollees are receiving tax credits to help cover their premium costs...but that still leaves around 40,000 exchange enrollees paying full price...plus another 85,000 or so enrolled in off-exchange policies who also have to pay full price. That's around 125,000 people who saw their premiums skyrocket by over 50% on average, which caused a massive crisis.

This led to Democratic Governor Mark Dayton entering emergency negotiations with the GOP-held state House and Senate to come up with a plan to provide financial assistance for those people as well...and last week they did so:

Governor Mark Dayton’s office is pushing hard for legislators to come to an agreement on providing immediate relief for the rising cost of health insurance in Minnesota.

Dayton proposed a 25 percent health insurance premium rebate for Minnesotans who do not qualify for federal tax credits, but purchase health insurance in the individual market. Specifically, that would apply to those whose income is above the federal cut-off line of 400 percent of the federal poverty level, or $47,520 for an individual and $97,200 for a family of four.

According to a fact sheet released by the governor’s office, the proposed 25 percent rebate would automatically reduce the monthly health insurance premiums for qualified Minnesotans. Democrats argue that having the program administered by health insurers, which already have consumer information in place, would allow the plan to move forward quickly. Rebates would be paid to the insurance company, as opposed to going to the consumer, who would then have another step to go through.

...According to a Friday news brief from Representative Steve Drazkowski, R-Mazeppa, the House plan would allow for-profit HMO’s to enter the marketplace. It would also reduce the stop-loss limit, “making it easier for small businesses to offer health insurance to employees.”

...But Democrats would be likely to disagree with the removal of what the governor’s chief of staff, Linden Zakula, called essential consumer protections that guaranteed a basic level of health insurance coverage for all Minnesotans.

Anyway, Gov. Dayton signed the final version of the bill the other day, and it looks like that 25% premium relief funding is going to go through immediately:

The following is a statement from Governor Mark Dayton:

“In order to provide urgently-needed health insurance premium relief to 125,000 Minnesotans, I am signing this essential legislation today. I do not agree with everything included in it. I have said repeatedly that I think it is unnecessary and unwise to rush the ‘reforms’ added to this bill, without proper public review or full consideration of their consequences. I am especially concerned that the change to allow foreign and for-profit insurers into the Minnesota market has not been adequately reviewed, and I ask the legislature to seriously re-evaluate this provision, when future health care legislation is considered.

“However, I appreciate that the bill’s Conferees agreed to my proposed mechanism to provide this premium relief as quickly as possible. And I commend the House leadership for championing the important ‘Continuity of Care’ addition to the bill.

“I also appreciate the Senate leadership’s willingness to set aside, for now, the reinsurance provision, which I have urged be given more careful consideration through the appropriate legislative committees. And I am relieved that the Conferees wisely rejected the House amendment, which would have removed important health care protections for Minnesotans.

“The Legislature and I must now turn our attention to making good health care coverage available and affordable for all Minnesotans. As I said the other night, ‘If we all give a little, Minnesotans will gain a lot.’ That spirit prevailed in negotiating this legislation. May it continue.”

Governor Dayton first proposed health insurance premium relief for Minnesotans 90 days ago for a possible special session, and reintroduced his plan as his first budget proposal of the 2017 Legislative Session 23 days ago.

OK, so that brings you up to speed. Here's the latest development:

New Deadline is Open to All Minnesotans, Only Available at MNsure.org

Two things to note: First, this is actually an eight day extension, not seven; second: This only applies to on-exchange enrollment, which is kind of interesting. I'm assuming they have to do it this way in order to properly track which policies receive the 25% cut; presumably it's a lot easier to do so through exchange enrollments than off-exchange. That's perfectly fine with me; I've long felt that all indy market enrollment should be run on-exchange only, whether people receive tax credits or not.

"This is good news for Minnesotans," said MNsure CEO Allison O'Toole. "Given how close enactment of the premium relief bill was to the deadline for open enrollment we believe Minnesotans needed more time to benefit from this important opportunity to lower their monthly health insurance bill by 25 percent."

The current open enrollment period is scheduled to end on January 31; however, this SEP extends the time Minnesotans have to shop for health insurance by one additional week. Health insurance purchased during this SEP is effective March 1, 2017.

The next part is also important, especially given the Trump Admin HHS Dept's recent "kill the ads!" shenanigans:

I had to read this section over a couple of times before I understood the precise wording. If I'm reading this correctly, MNsure is required to get approval from the HHS Dept. in order to extend an existing enrollment period...but they don't need permission to declare a special enrollment period.

In other words, technically speaking, this isn't an extension, it's simply a special enrollment period...which just happens, by an amazing coincidence, to start immediately after Open Enrollment Period ends (and by immediately, I mean 1 second past midnight).

The premium relief bill passed by the Minnesota Legislature and signed by Governor Dayton appropriates $312 million to provide consumers who purchase health insurance in the individual market and do not receive advanced premium tax credits, an automatic 25 percent discount on their monthly health insurance premiums. The discount will be applied automatically by health insurance companies and does not require additional action by Minnesotans.

I'm also a little confused as to how the eligibility rule works--I presume the ~40,000 unsubsidized on-exchange enrollees don't have to do anything, as they're already in the system...and anyone who hasn't signed up yet would simply have to do so via MNsure. My question is about the other ~85,000 off-exchange enrollees. Do they have to cancel their current off-exchange policy and re-enroll through MNsure? Will their records be automatically moved from the direct-enrollment to MNsure databases for processing?

Anyway, this is a huge and welcome development.

I'm also a little fuzzy on exactly where the $312 million funding actually comes from; I'll update this if I find out the answer to any of these questions.

UPDATE: OK, Louise Norris informs me that it's coming from MN's general fund for the moment...no special tax/fee, no killing some other program or anything (yet). Fair enough; they can figure out how to make up that revenue at a later date, I suppose.

In the meantime, Minnesota residents have another 8 days to sign up.