The fact that the Graham-Cassidy bill, like all of the prior Republican "replacement" healthcare bills, screws over people on both Medicaid and the individual market starting in 2020 is hardly news. A few provisions of the ACA are stripped out and/or bastardized immediately (and some, like the individual mandate penalty, are even repealed retroactively), but for the most part the pain doesn't start for another 2 years, well after the midterms are over.

However, JP Massar called something to my attention this morning:

Sure enough, here's the actual text from the bill itself: 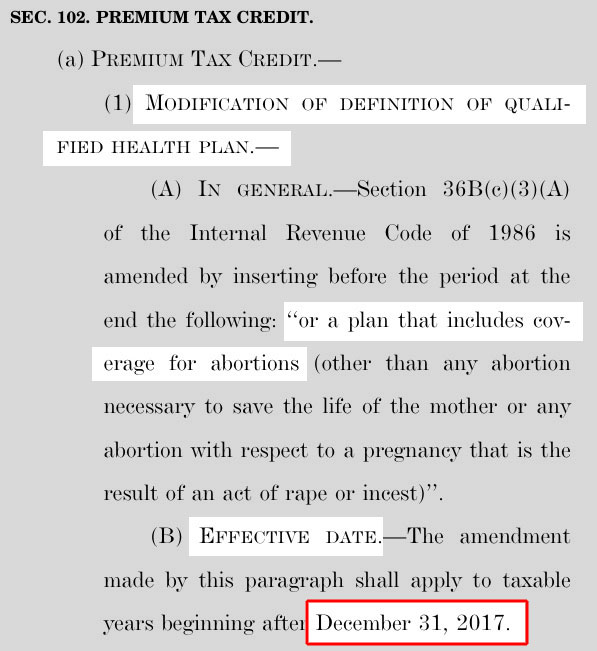 If the no-abortion provision popped up starting in 2020, it would suck but would also be pretty much moot since the premium tax credits are wiped out starting then anyway.

However, the current ACA tax credit structure would stay in place for the next two years (2018-2019)...and this presents several problems:

It's important to understand that legally, it doesn't matter whether the enrollee herself actually had an abortion, or whether she was even pregnant. What's relevant is whether the policy itself INCLUDED abortion coverage or not.

What would the legal implications of THAT be? Would the contracts become null and void? Would they have to be resubmitted? Would no one be allowed to purchase them on the exchanges, or would they be allowed to enroll in the policies, but only at full price? Would only men be allowed to enroll in those policies (which wouldn't make much sense since, again, the issue is whether the policy actually covers the procedure, not whether the enrollee is physically able to require it)?

BUT WAIT, if you live in California, it gets even worse!

The potential collision stems from how thoroughly California has embraced abortion rights, starting with enshrining a right to privacy in its Constitution. In 1981, a court ruled that, under the California Constitution, the state must treat abortion and maternal care neutrally. Any plan offered or regulated by the state that offers pregnancy coverage must also cover abortions.

State law now requires all policies in the individual and small group markets to cover abortion.

Does anyone else see the problem here?

Graham-Cassidy would, if it became federal law, legally prohibit individual/sm. group market policies which do cover abortion from being defined as "Qualified Health Plans".

Can anyone else say "states rights lawsuit"?

I'm a little surprised that neither Planned Parenthood nor NARAL appear to have mentioned this particular issue yet (PP tore Graham-Cassidy to shreds in general, but didn't mention the 2018 abortion restriction in their statement, while I don't see any specific G-C press release at all yet on NARAL's website, although they're strongly opposing it via Twitter). My guess is that this is a deliberate move on PP's part, since abortion is such a tiny part of what they actually do; plenty of other issues to attack G-C on.

In any event, this seems like something which deserves a bit more attention than it's received so far.

UPDATE: It turns out that the "states rights" issue could hit New York, Massachusetts and Oregon as well (this is from MARCH, I should note):

For now, the proposal would create a big problem for two of the largest and most liberal states: California, where state law requires insurers to cover abortion, and New York, which has long encouraged coverage by including it in its model plan of what insurers have to cover. Massachusetts, too, has long indicated that insurers should cover abortion as “medically necessary.”

The law, if passed, would all but make it impossible for Californians to use the new tax credits to buy health insurance.

Oregon Gov. Kate Brown (D) on Tuesday signed into law what advocates called the nation’s most progressive reproductive health policy, expanding access to abortion and birth control at a time when the Trump administration and other states are trying to restrict them.

Several people have pointed out that similar provisions were deemed unacceptable by the Senate parliamentarian earlier this year, so it's possible that this particular bit of stupidity would be a moot point even if the bill passes anyway, but then again, you never know (and the Senate GOP are so far off the deep end at this point, they might even overrule the parliamentarian anyway). Alternately, it's possible that they'll just scratch out "2018" and replace it with "2020" or whatever...or perhaps the HHS Dept. will extend the contract filing deadline out into October, which seems pretty likely at this point anyway. Even doing that would cause other issues, however, seeing how Open Enrollment officially launches November 1st, only a few weeks later.

In short, Graham-Cassidy is a big pile of flaming dog poop in every conceivable way.

That's right: Even under the revised version, any individual market healthcare policy covering abortion on the ACA exchanges would become illegal starting 98 days from today.

For that matter, so would any ACA small group exchange (SHOP) policy covering abortion. While far fewer people are enrolled in ACA SHOP policies (perhaps 100,000 or so today nationally?), a big chunk of those happen to be...members of Congress and their staff, who have to use the District of Columbia SHOP exchange if they want to receive their FEHB assistance.

That raises another interesting question, which I was reminded of by Twitter follower "Josef jewel": How many members of Congress and/or their staff members are enrolled in policies which are set to become illegal in 98 days if Graham-Cassidy passes? Well, I don't know about 2017 plans, but this article from 2013 (just before the exchanges launched) made it sound like an awful lot of them probably are:

The disclosure Wednesday by abortion opponent Rep. Chris Smith, R-N.J., also highlights an emerging issue nationally: It may be hard for individual consumers to determine whether abortion is a covered benefit in plans offered through the new online insurance markets.

For government insiders, there's another twist: Lawmakers and their staffs now appear to be the only federal employees with access to abortion coverage through their government-supported health insurance plans.

Smith said only nine of the 112 insurance plans offered to members of Congress and their staffs through the Washington, D.C., insurance market exclude abortion as a covered benefit.

AGAIN, it's important to note that it doesn't matter whether or not the enrollees actually get an abortion, become pregnant or even whether they're pro-choice or not. If the policy itself covers abortion, it would no longer be legally defined as a Qualified Health Plan under the ACA, which means it couldn't legally be sold on the ACA exchange, which means it wouldn't qualify for any tax credits. In addition, in DC specifically, neither individual market nor small business market policies can be sold off-the ACA exchange either, which means that you wouldn't be able to enroll in a policy covering abortion even if you were willing to pay full price for the policy. 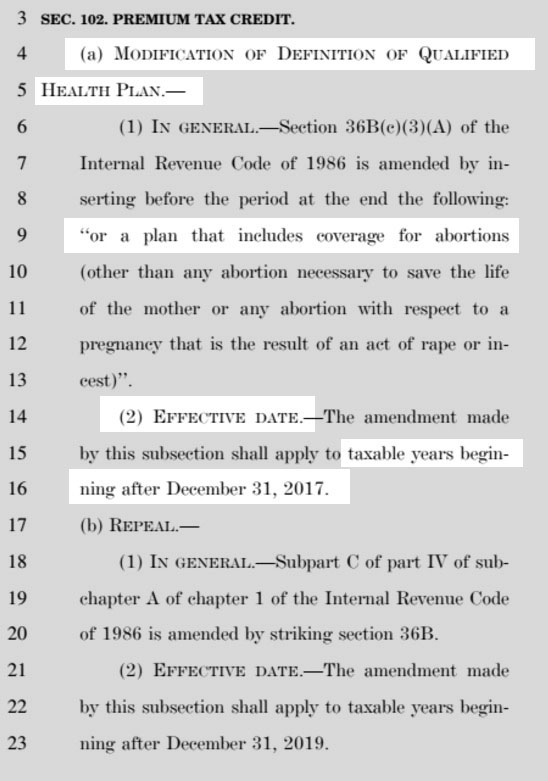