In March 2014, as the first ACA open enrollment period deadline was approaching, President Obama made an appearance on Zach Galifianakis' "Between Two Ferns" to try and ramp up enrollments among the uninsured. In February 2015, as the second OE deadline approached, he teamed up with BuzzFeed to shoot a different type of promotional video, featuring the first Presidential Selfie Stick (and a nice milk-and-cookies "Thanks Obama" riff).

For the third time around, I'm guessing the President has something similar in store for the final lap in mid-January (remember, the deadline is 1/31/16 this year), but to kick things off, he's annouced an interesting new promotional effort:

As open enrollment season on HealthCare.gov begins, President Obama is introducing a contest meant to motivate Americans to sign up for health insurance coverage through federal and state exchanges.

IMPORTANT DISCLAIMER: I COULD BE COMPLETELY WRONG ABOUT THIS OPTION.

Just this morning I posted some significant updates in the ongoing, increasingly messy saga of Health Republic of New York, one of the ACA-created Co-Ops which is being shut down due to severe financial issues (partly due to the Risk Corridor Massacre debacle, but other reasons as well).

Once again, the short version is:

I wrote a couple of posts last week about the ongoing Health Republic of New York Co-Op meltdown, which has quickly gone from being just-another-Co-Op-closure to a complete disaster for up to 166,000 New York residents, primarily because unlike the other Co-Ops which are at least covering their existing enrollees through the end of December, Health Republic is now having the plug pulled out at the end of November, which gives current enrollees just 8 days to scramble to find new coverage for the last month of 2015.

This was made worse by the fact that the November 30 cut-off wasn't even announced until October 30, and even then, the powers that be in the NY Dept. of Insurance, NY State of Health exchange and Health Republic itself didn't appear to treat this development with any particular sense of urgency. I mean yes, they posted notices about it and supposedly sent out letters to all 166,000 people, but an awful lot of those people didn't appear to have received those notices as of a few days ago. Hell, until a day or two ago the NY State of Health website didn't even have anything posted about the 11/30 cut-off at all.

Well, I've been screaming bloody murder about the situation, as have others, and it seems to be getting some butts moving...but I'm not sure how helpful any of it will be.

First up: Dan Goldberg, a very good reporter for Politico New York, posted a big story about the mess on Thursday which no doubt forced some action:

Kentucky: Kiss Kynect Goodbye. Bevin to pull the plug by end of 2016.

Unlike the federal exchange (HealthCare.gov) and many of the state-based exchanges which have experienced massive technical problems to some degree or another over the past two years (Oregon, Nevada and Hawaii have gone kaput; Massachusetts & Maryland had to be completely rebuilt; Vermonts is still iffy),  the Kentucky ACA exchange website, aka "kynect" (lower-case intentional), has been chugging along smoothly since Day One on October 1, 2013. It's fully self-sufficient, well known and trusted by Kentuckians, and has been an amazingly successful venture in general.

Speaking in his first public comments since he was elected governor of Kentucky on Tuesday, Matt Bevin repeated his pledge to dismantle kynect, the state’s health insurance exchange that has been hailed as a national model.

“My intent is to have it wound down by the end of next year,” Bevin said of the online service people use to shop for health coverage or determine whether they are eligible for Medicaid under the Affordable Care Act.

Total uninsured rate could be down to *8.4% or lower* if every state expanded Medicaid

NOTE: I am very much aware that simply "mashing up" 2 different surveys and splitting the difference is not a statistically professional way to do this, but it's the best I can do for the moment.

Back in July, after Gallup released their quarterly survey finding the U.S. uninsured rate to have dropped to 11.4% for adults 18 and older, I posted a more detailed graph which also separated out people caught in the Medicaid Gap as well as uninsured Undocumented Immigrants (who aren't eligible for either the ACA exchanges or Medicaid/CHIP, except for children in California...and I presume the new CA law doesn't start until January). Here's what the chart looked like at the time: 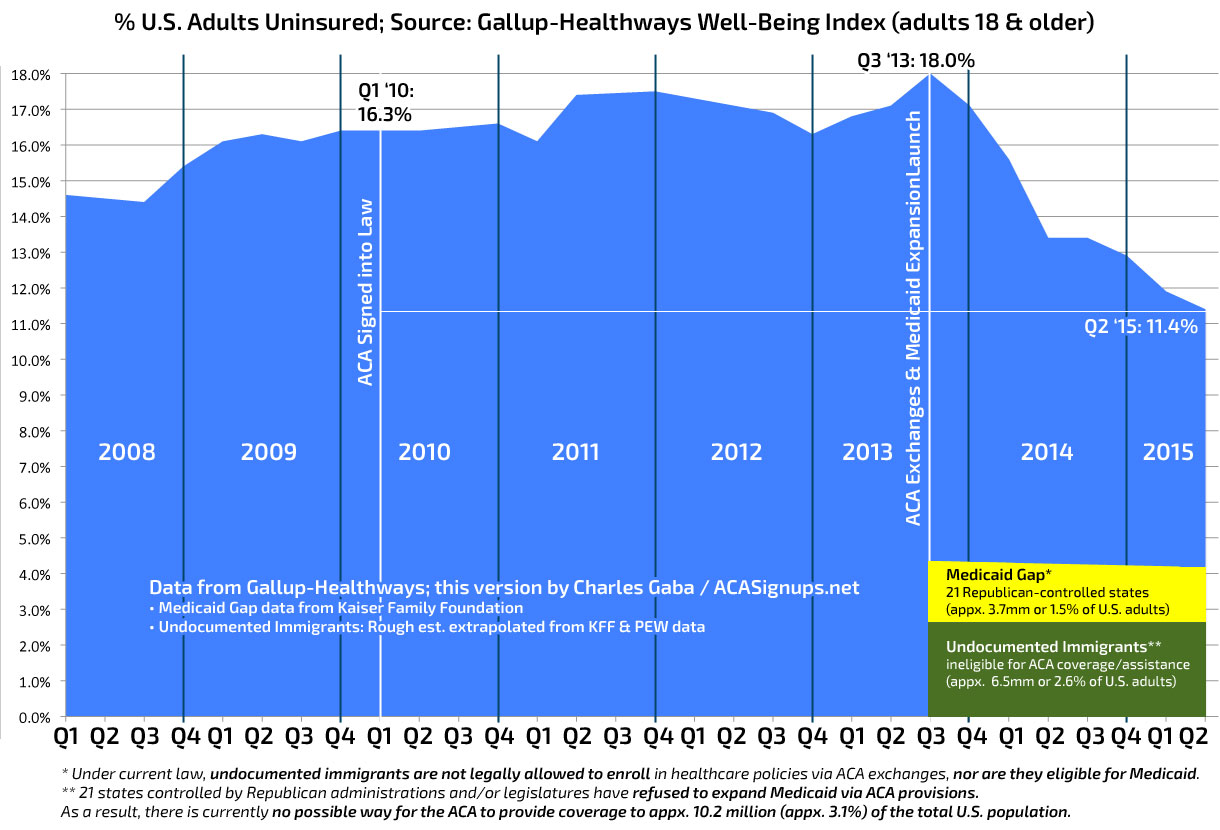 Colorado: Hmmmm...Tax credit recipients could save up to 46% on premiums by shopping around.

Like HealthCare.Gov (for 37 states) and Minnesota have done already, Colorado's insurance commissioner is also letting state residents know about the importance of shopping around for their insurance policy for 2016:

Health insurance premiums will increase on average 7 percent in Colorado in 2016, according to statistics compiled by the state division that reviewed and approved plans for the coming year.

...Consumers who purchased through Connect for Health Colorado, the state health insurance exchange, in 2015 who aren’t eligible for tax credits will see an average increase of 12 percent if they simply renew their current plan for 2016.

A couple of weeks ago, I posted the following:

Look, the later part of the article talks about the form in question itself, IRS Form 8962, being overly complicated, and perhaps it is. It's 2 pages, and while it's certainly not as bad as some other federal tax forms, I can definitely see it being intimidating to those who are used to just filling out the 1040-EZ form, as I did years ago. Comic strips and sitcoms have used the "Taxes Are Hard!!" meme as comedic fodder for decades. So no, I'm not going to berate anyone complaining about the form being difficult to fill out.

HOWEVER, complaining about having to file a tax return AT ALL? You're receiving thousands of dollars in tax credits and you didn't think you'd have to fill out a tax form in order to prove your eligibility?

...Again, it's safe to assume that this has gone down as well, although probably not as dramatically as for adults. A similar 36.7% drop would be around 2.2 million children (taking population increase into effect), but even half of that would still lop a good million children off the uninsured tally...or an additional 0.3% of the total population.

Oh, wait...no, it's actually just The Graph, officially returning for the third go-around.

Simple. In fact, as I explained earlier today, it's entirely possible that the national total is much higher than 230K already--it could potentially be up to as high as 800,000 or more already. Here's a simplified explanation:

8,500 of those 8,700 come from Maryland over the first 3 days of this week. Maryland enrolled around 120,000 people during open enrollment last year...which just happens to be roughly 1% of total enrollments nationally.

The dozen collapses will disrupt insurance for 740,000 individuals and small-business employees, who are being instructed by state and federal officials to choose new plans in time for them to take effect in January. In New York state, the window is narrower. Government officials have moved up the closing date of the New York Health Republic co-op, the nation’s largest, giving its more than 200,000 members just two weeks to select different coverage before it shuts down at the end of this month.

Although it lost money in 2014, New Mexico Health Connections is “financially very strong” with strong cash reserves, CEO Martin Hickey said Wednesday. In fact, the co-op expects to greatly expand by picking up consumers who had been insured with Blue Cross Blue Shield New Mexico on the state health exchange. Blue Cross is not offering individual insurance policies on the exchange for 2016.

“Our competitors don’t want to believe it necessarily, but we’re financially healthy,” Hickey said. “We’re going to be here for a very long time.”