HUGE news for Minnesota and New York: BHP funding lawsuit settled, HHS must pay up after all

The Basic Health Program is one of the more obscure provisions of the Affordable Care Act. Very few people outside of the healthcare wonk community know anything about it...unless they live in Minnesota or New York State.

The short version is that it's an optional low-income healthcare program designed for people at the income tier just above Medicaid expansion...138% - 200% of the Federal Poverty Line, or between around $16,600 - $24,100/year for a single adult. In most states people in that income range would be expected to enroll in heavily-subsidized ACA exchange policies. In New York and Minnesota, however, they've instead set up Basic Health Programs (BHPs) for this population instead.

From the enrollee's perspective, it's really just a simpler, easier-to-use healthcare policy: Enrollees have to pay anywhere from $0 to $80/month depending on their income, with extremely reasonable co-shares and very low maximum out-of-pocket costs. I don't really know whether a BHP plan or a highly-subsidized ACA plan is better for most people in the target population, but BHP is certainly simpler. In some ways you might think of it as Medicaid for a higher income tier, and healthcare wonks like Andrew Sprung have even speculated that it could be used as a model for a national Universal Coverage program.

Minnesota (where it's called "MinnesotaCare") had it first because it actually pre-dated the ACA itself; as a state-based program. When the ACA passed, Minnesota simply retooled their existing program with BHP funding. New York added their own BHP program (called "the Essential Plan") a couple of years later. It's been quite popular in both states, with 84,000 people enrolled in MinnesotaCare and 738,000 enrolled in New Yorks' Essential Plan this year. That's a total of over 820,000 people.

So what's the problem? Well, as with so many other things related to last year's ACA repeal/replace/sabotage efforts by Donald Trump and the GOP, it all goes back to...Cost Sharing Reductions:

Since BHP policies come at a nominal cost to the enrollee (ranging from $0 to around $1,000/year at the outside), how are they funded? Well, under the BHP waivers approved by CMS, the federal government provides 95% of whatever the combined APTC + CSR funding the enrollees would otherwise be entitled to if they didn't have a BHP program. This is critically important to explain what happened last week.

Let's say you're a single adult living in New York and earn 150% FPL, or around $18,000/year. If NY didn't have the BHP program, according to the APTC formula, you'd have to pay 4.08% of your income (around $738/year) for the benchmark Silver QHP. Your CSR assistance would also knock your deductible/co-pay costs down considerably, likely by several thousand dollars on average. If the full-price Silver QHP cost, say, $500/month, you'd receive $5,262 in APTC, plus perhaps $1,000 in CSR assistance (remember, the amount of CSR help you actually receive varies greatly depending on how much you actually rack up in healthcare expenses that year). Let's call it around $6,200/year in APTC + CSR combined. 95% of that would be around $5,900. That's how much would normally be available from the federal government to fund the BHP program instead.

Let's say that this amount ($5,900) was the average calculated for all 820,000 BHP enrollees across both MN and NY. Combined, that adds up to around $4.8 billion per year (roughly $4.2 billion for New York and perhaps $600 million for Minnesota). Obviously these are crude estimates, but you get the idea. I'll come back to this in a minute.

CSR assistance is only available for ACA exchange policies for those earning between 100-250% FPL. But in NY and MN, people earning under 138% FPL enroll in Medicaid, and those earning 138-200% FPL are enrolled in the BHP program instead. This means that there's only a tiny number of CSR enrollees in MN & NY (those in the 200-250% FPL range).

Since BHP funding is based on 95% of what the APTC + CSR combined would add up to if the state didn't have the BHP program, this means that cutting off CSR reimbursement payments caused a huge funding problem for both states. The APTC amount increased slightly...but the BHP portion was completely wiped out.

Now, let's go back to the ~$4.8 billion in BHP funding. The bulk of that, perhaps 75-80%, comes from the "missing" APTC subsidies. The other 20-25% or so, roughly $1 billion in New York and perhaps $120 million or so in Minnesota, should be provided by the "missing" CSR assistance in each state that the enrollees would otherwise be entitled to receive.

However, as health wonk Michael Kalina explained in a still-brilliant blog post last summer, there was a huge legal question as to how the BHP funding provision of the ACA was worded. Kalina noted that it might be funded based on how much CSR funding actually was...but it might also be based on how much it's supposed to be.

All of this led to a big lawsuit filed jointly by both states:

#BREAKING: We are suing the Trump administration for abruptly and illegally cutting off more than $1B in funding for New York’s Essential Plan—a lifeline for over 700,000 low-income NYers. pic.twitter.com/esVG1spfwG

(Sidenote: As you can see, former NY Attorney General Eric Schneiderman's Tweets have already been redirected to a generic "NY AG" account, with his original account going to a blank page. Huh, interesting...)

All of that brings us to today, when the judge in the case announced his decision on the case.

I've posted the relevant text below, but the gist of it seems to be that the HHS Dept. has to pay at least $169 million to NY and MN to cover the 2nd quarter of 2018, and that MN/NY/HHS are required to put their heads together and come up with some alternate method for HHS to use to come up with the money they owe the states going forward. It also sounds like HHS will have to pay NY/MN the rest of the money owed for the 1st and possibly 3rd quarters of 2018 as well if the new formula doesn't cover them.

It sounds to me like Minnesota and New York are gonna be reimbursed everything they're owed except for the last quarter of 2017, but I'm not sure about that. In any event, assuming I'm reading all of this correctly, it sounds like the BHP crisis for both states has been resolved. If so, this is a double blow to the Trump Administration: Not only did he fail at yet another attempt to sabotage the ACA, lost to two blue states (OK, Minnesota is more purple, but still). 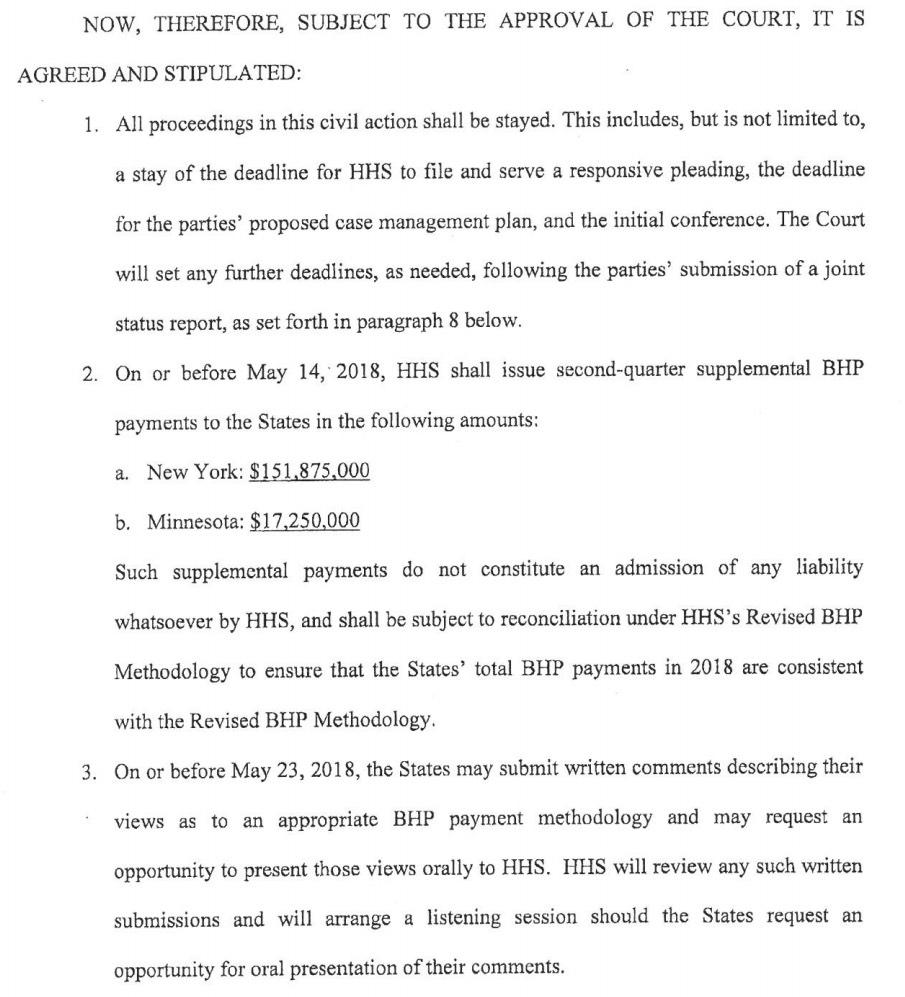 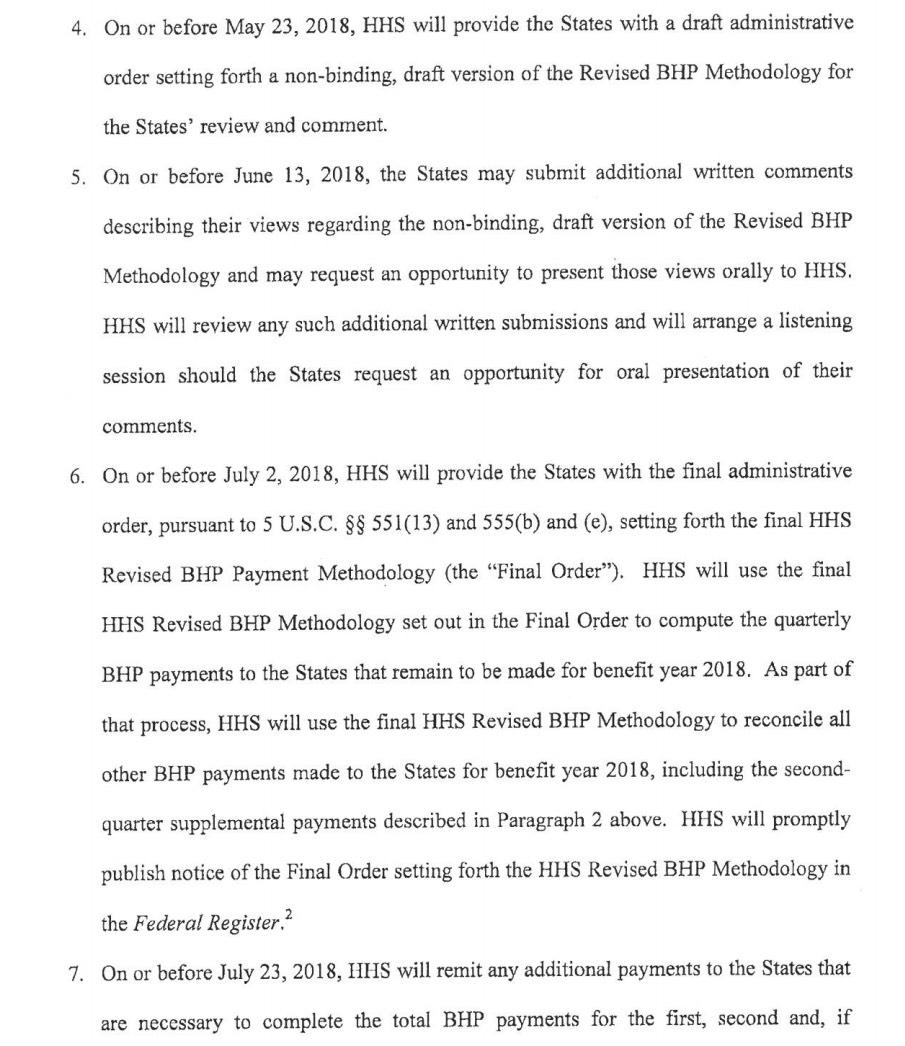