Michigan & Kentucky duke it out to lead the nation...in racist #MedicalGerrymandering.

A week or so ago, I noted that Republicans in my home state of Michigan have come up with a clever way of having their (chocolate) cake and eating the (vanilla) cake too. As first noted by Nancy Kaffer of the Detroit Free Press:

Of course, in this case, "rural" and "urban" are code words for something uglier, as noted by Danielle Emerson of the Great Lakes Beacon:

At the Washington Post, Jeff Stein and Andrew Van Dam crunched the numbers further on the racial divide and confirmed it:

Medicaid enrollment data provided to The Post by the Michigan Department of Health and Human Services shows that this exemption would overwhelmingly benefit white people while leaving the work requirements in place for all but a sliver of the affected African American population.

Without the exemption, the work requirements are projected to apply primarily to approximately 700,000 Michigan residents enrolled in Medicaid under broader eligibility rules passed under Gov. Rick Snyder (R). 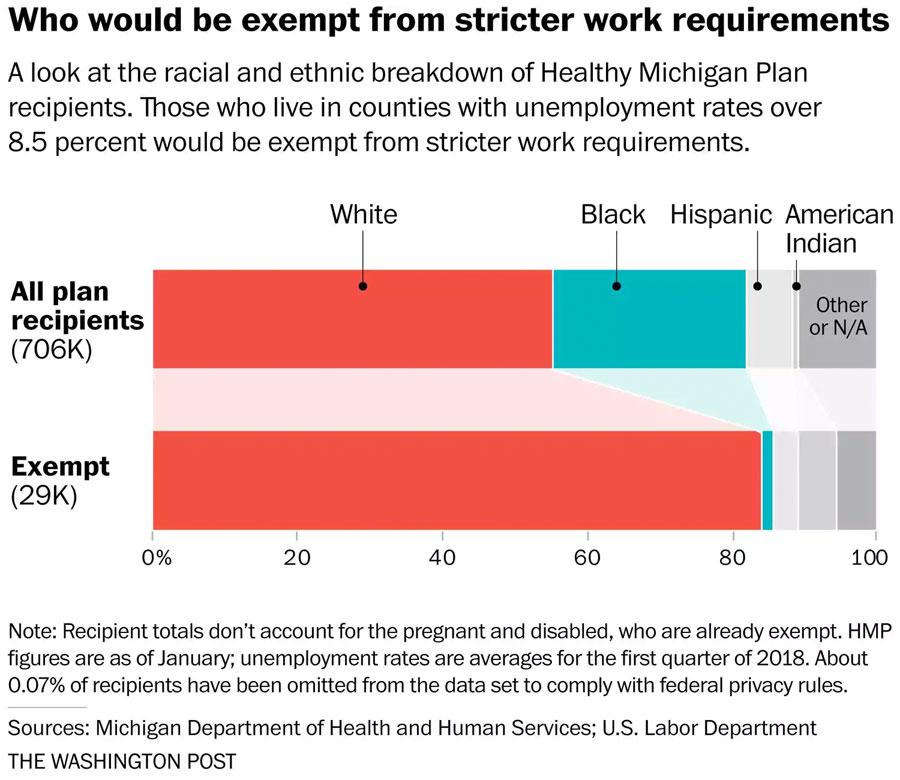 And yes, this is blatantly illegal, as noted by Nicholas Bagley and Eli Savit in the New York Times:

Perhaps the discrimination is unintentional. But from the perspective of civil rights law, that makes no difference. Title VI of the Civil Rights Act of 1964 prohibits recipients of federal funds — including state Medicaid programs — from employing “methods of administration that appear neutral but have a discriminatory effect on individuals because of their race.”

That’s according to the Department of Health and Human Services, the federal agency responsible for overseeing Medicaid. And Michigan’s bill presents exactly the sort of discrimination that Title VI outlawed: It’s a county-level exemption that “appears neutral” but has a “discriminatory effect.”

I guess I can't feel too "proud" of Michigan's "can-do" spirit, however, since Kentucky actually beat us to the punch, as reported by Alice Ollstein of Talking Points Memo:

As the Trump administration moves aggressively to allow more states to impose mandatory work requirements on their Medicaid programs, several states have come under fire for crafting policies that would in practice shield many rural, white residents from the impact of the new rules.

In the GOP-controlled states of Kentucky, Michigan, and Ohio, waiver proposals would subject hundreds of thousands of Medicaid enrollees to work requirements, threatening to cut off their health insurance if they can’t meet an hours-per-week threshold.

Those waivers include exemptions for the counties with the highest unemployment, which tend to be majority-white, GOP-leaning, and rural. But many low-income people of color who live in high-unemployment urban centers would not qualify, because the wealthier suburbs surrounding those cities pull the overall county unemployment rate below the threshold.

The waiver in Kentucky, the first state to win federal approval for a Medicaid work requirement, will have the effect of exempting eight southeastern counties where the percentage of white residents is over 90 percent. The work requirements will be imposed first in Northern Kentucky, which includes Jefferson, the county with the highest concentration of black residents in the state. The rules are set be enforced first in that area this July, but a federal court challenge in June could decide the fate of the program.

...Ohio’s Medicaid work requirement proposal — recently submitted for federal approval — is of a similar design, and would have the same disparities between urban residents of color in Cleveland and Columbus and rural white residents in the rest of the state.