When that deadline approached, NY Governor Andrew Cuomo ordered the COVID-19 SEP to be bumped out by another month.

And now, with the June 15th deadline having come and gone, lo and behold:

Governor Andrew M. Cuomo today announced low-risk youth sports for regions in phase three of reopening can begin on July 6th with up to two spectators allowed per child.

New York is the fifth state (well, fourth really) to announce their preliminary 2021 health insurance policy premium rate changes for the individual and small group markets (thanks to Michael Capaldo for the heads up):

Health insurers in New York have submitted their requested rates for 2021, as set forth in the charts below. These are the rates proposed by health insurers, and have not been approved by DFS. 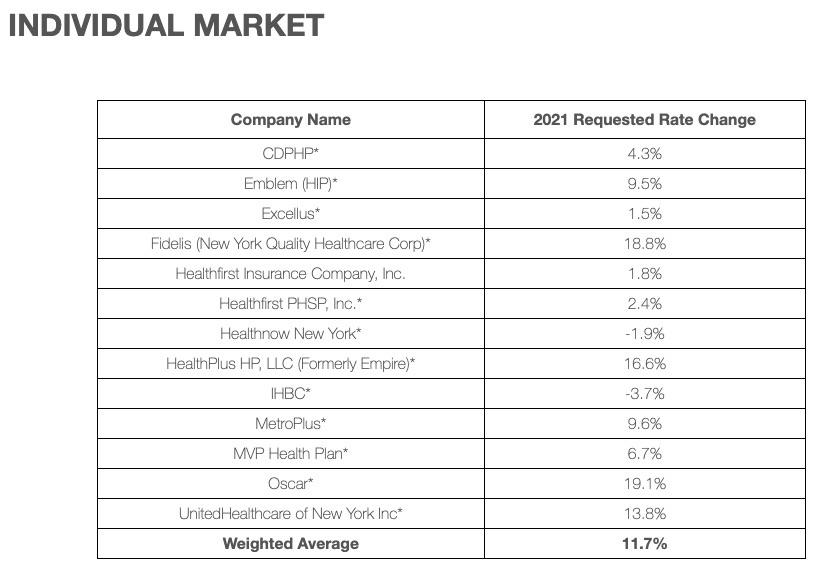 Now as that deadline approaches, NY Governor Andrew Cuomo has ordered the COVID-19 SEP to be bumped out by another month:

Today, on top of several other state-based exchanges bumping out their COVID SEP deadlines, it appears that NY is doing so as well. This is hardly surprising given that the state has been slammed the hardest of any in the country by the pandemic.

There's no official press release or announcement as of yet, but according to Bloomberg News, NY Governor Andrew Cuomo made the announcement at a press conference today:

New York is extending open enrollment for health insurance through May 15, Cuomo says.

Update: Here's the official press release...there's some other important details included as well:

via the New York Dept. of Financial Services:

TAKE A HINT, PEOPLE: At least 18 states, many cities/counties order all bars/restaurants etc. shut down except for delivery/carryout

TO CLARIFY: In pretty much all cases below, when it comes to restaurants, "shut down" refers to dining in only; they're pretty much all still allowing delivery/carryout orders.

ALL OTHER STATES: You may qualify for a 60-day Special Enrollment Period (SEP) if you've recently lost (or will soon lose) your employer-based healthcare coverage, or if you've experienced other Qualifying Life Events (QLE) such as getting marrinew yorked/divorced, moving, giving birth/adopting a child, getting out of prison, turning 26 etc. For these SEPs you may have to provide documentation to verify your QLE. Visit HealthCare.Gov or your state's ACA exchange website for details on the process.

Yesterday the first confirmed case of coronavirus (COVID-19) was reported in the nation's largest city:

A 39-year-old Manhattan woman has tested positive for COVID-19, more commonly known as the novel coronavirus, Gov. Andrew Cuomo said late Sunday. She is the first confirmed case in the city and in the tri-state area.

"The patient, a woman in her late thirties, contracted the virus while traveling abroad in Iran, and is currently isolated in her home," Cuomo said in making the announcement late Sunday.

The governor said that the woman is a health care worker, and that her background allowed her to take the appropriate precautions and seek testing. She flew back to New York on Tuesday but did not take mass transit home, Cuomo said Monday. As a precaution, the people on her flight and the ride-share driver are being notified about potential exposure, but Cuomo said the woman was not thought to be contagious at that time. She has respiratory symptoms but Cuomo described them as mild.

One more reminder from the New York State of Health ACA exchange:

ALBANY, N.Y. (February 5, 2020) – NY State of Health, the state’s official health plan Marketplace, is encouraging New Yorkers who need health coverage to enroll in a 2020 Qualified Health Plan (QHP) by this Friday, February 7. The Open Enrollment deadline was extended an additional week to give consumers more time to find the health plan that fits their needs and enroll in coverage for 2020. Already, enrollment through NY State of Health is at its highest point ever, with more than 4.8 million New Yorkers enrolled in a health plan.