Back in late January, when it became clear that the Biden Administration was planning on announcing some sort of "no excuse needed" COVID Special Enrollment Period for the federal ACA exchange, I did a little back-of-the-envelope math to try and get an idea of how many additional people might enroll via HealthCare.Gov than you'd normally see via "standard" Special Enrollment Periods.

At the time, I concluded that for a 60-day SEP of this nature (that is, one completely open to all comers regardless of whether they had a Qualifying Life Experience (QLE)or not), you might be looking at perhaps an extra 400,000 people. selecting plans during that time period. This would be on top of the 4,200/day who enrolled thru HC.gov between the end of Open Enrollment and the end of May via SEPs over the past couple of years, which would be roughly 254,000 for a 60-day period.

I freely admitted at the time that this was an extremely crude spitball estimate, based on partial data from a handful of state exchanges which did open COVID SEPs last spring/summer, and that I could be way ooff.

Sure enough, last week, Health Sherpa, one of the most popular Enhanced Direct Enrollment ACA partners (basically,private 3rd-party health insurance websites authorized to sell on-exchange ACA policies) announced that they had enrolled over 40,000 people in the first week of the COVID SEP, and that this represented "more than triple the volume" of normal SEP enrollment for them.

I used this data to estimate that, extrapolated out, total COVID SEP enrollment was likely somewhere between 160K - 250K nationally in the first week. Assuming ~72% of that is via the 36 HealthCare.Gov states, that'd be around 115K - 180K via the federal exchange for Week 1.

Well, CMS didn't release data for the first week by itself, but this morning they did release a TWO-week HC.gov COVID SEP enrollment report.

via the Centers for Medicare & Medicaid:

The Centers for Medicare & Medicaid Services (CMS) report that more than 206,000 Americans signed up for health insurance plans during the first two weeks of the 2021 Marketplace Special Enrollment Period (SEP) for consumers in HealthCare.gov States.

The number of new plan selections from the start of the SEP opportunity on February 15 through February 28 represents an increase from 76,000 and 60,000 consumers signing up for health insurance during the same period in 2020 and 2019, respectively.[1]In previous years, SEPs were available only for qualifying life events, whereas this year the Biden-Harris Administration opened an SEP to all Americans in response to the COVID-19 Public Health Emergency.

Definitions and details on the data are included in the glossary at the end of the report. 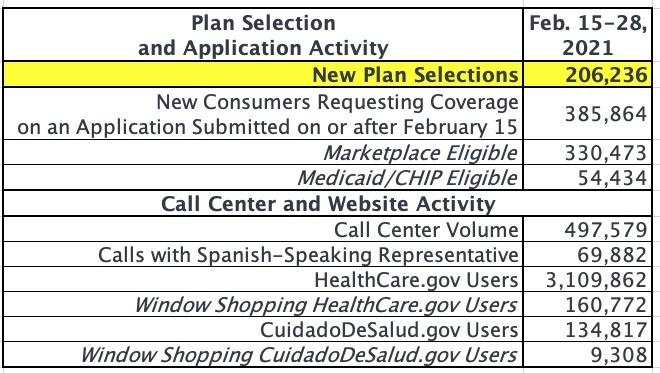 Here's the state-by-state breakout. I've included a column which compares the first 2 weeks of the COVID SEP against the average 2-week SEP enrollment from 2019 and 2020. Sure enough, it comes in at over 3x the daily average vsthe two prior years: 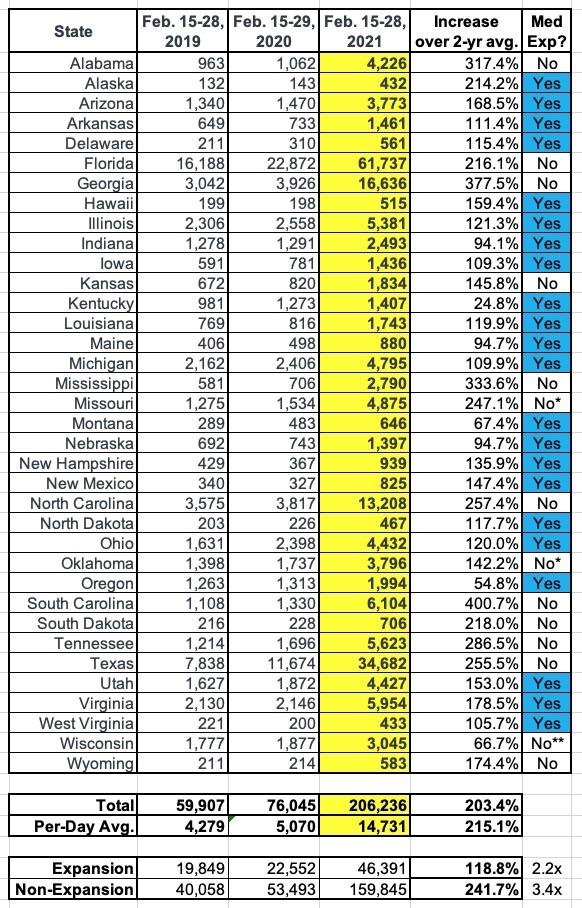 I should note that the only state-based exchange which has released any COVID SEP data is Washington, which reported 1,700 SEP enrollments in the first 9 days. Without knowing how many SEP enrollees they had for that period in 2019 & 2020, however, I can't really add them into the table above.

Kentucky has seen the smallest average increase (25%); South Carolina has had the largest (400%). Of course, this could be backwards: It's possible that Kentucky had higher than average and South Carolina had lower than average SEP enrollments in prior years for whatever reason, thus resulting in the increases seeming lower/higher than the norm. I'd have to compare each state in more detail to figure that out.

When you subtract those who would have enrolled via "normal" SEPs anyway, that leaves nearly 141,000 COVID SEP-specific enrollees in the first two weeks, or around 10,000/day via HC.gov.

Assuming that HC.gov enrollment represents the same 72% of national enrollment that it did during the official Open Enrollment Period, that suggests around 286,000 total QHP selections nationally (~20,400/day), or around 196,000 more than you'd normally expect (~14,000/day).

Assuming this pace were to hold steady for the full 93-day COVID SEP (which is unlikely; again, it will probably ebb and flow as time goes on), that would translate into something like:

Of course, all of this is BEFORE the American Rescue Plan is passed and signed into law, with significantly beefed-up and expanded subsidies; once/assuming that happens, the numbers could increase substantially further. Stay tuned...

Update: As noted above, Medicaid expansion states have only increased average SEP enrollment by around 2/3 as much as Non-expansion states. Since all 15 state-based exchanges have expanded Medicaid, this suggests that the 206K via HC.gov probably represents more like 80% of the total, meaning perhaps 258,000 nationally (~168,000 more than average).

If so and if the pace continued at that rate, that would mean something like 1.71 million by 5/15, or 1.1 million more than average.