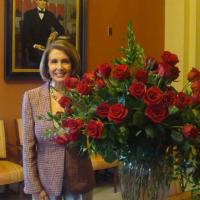 Speaker of the House Nancy Pelosi, the first woman to hold the most powerful position in Congress, who has been the leader of House Democrats for 20 years, announced earlier today that she's stepping down from her leadership position as soon as the 118th Congress takes office on January 3rd, 2023.

Pelosi is a legend in the U.S. Congress, and no accomplishment more perfectly illustrates her skill than the passage of the Patient Protection & Affordable Care Act in 2009 - 2010.

As U.S. Senator Chris Murphy of Connecticut put it in a Twitter thread a few minutes ago:

There's one night I will remember most when thinking about Nancy Pelosi - the night I watched her single handedly save health care for 20 million Americans. It was at the first Democratic caucus meeting after Scott Brown won the special Senate election in Massachusetts.

Many rank-and-file Democrats were in a panic, and they lined up at the microphone to tell Pelosi that it was time for us to give up on the Affordable Care Act. Or chop it up into little pieces - as some in the White House were suggesting.

Speaker Pelosi releases ambitious drug bill...only to have it immediately shot down by McConnell

I'm a bit late to the game on this due to being backlogged, but for the record (via Abby Goodnough of the NY Times):

Speaker Nancy Pelosi on Thursday released her long-awaited plan to curb soaring prices of prescription drugs, a political chess move that could prod the Senate to move and heat up congressional negotiations with the White House on a popular but elusive goal.

Ms. Pelosi’s plan, which she was to lay out at a morning news conference, would allow the government to negotiate the price of as many as 250 name-brand drugs for Medicare beneficiaries — an idea that many Republicans hate but that President Trump embraced during his 2016 campaign. Drug companies would also have to offer the agreed-on prices to private insurers or face harsh penalties, which could give the package broader appeal with voters.