Thanks to Amy Lotven of Inside Health Politics for the heads up:

CMS Thursday (July 15) announced a new advertising campaign that will run in the final 30 days of the special enrollment period slated to end Aug. 15, and the agency also confirmed Inside Health Policy’sreport that the agency plans to auto-adjust tax credits for consumers who do not return to the federal marketplace starting Sept. 1.

Sure enough, this press release was put out by CMS earlier today:

Today, on the heels of health coverage sign ups surpassing two million, the Biden-Harris Administration is launching the “Summer Sprint to Coverage” campaign as part of robust efforts to get more Americans to sign up for health coverage in the final 30 days of the Special Enrollment Period (SEP) on HealthCare.gov. The Centers for Medicare & Medicaid Services (CMS) will spearhead the “Summer Sprint to Coverage” campaign, mobilizing an all-hands effort including integrated paid media placements, increased community outreach, and more to encourage Americans who need coverage to sign up at HealthCare.gov by August 15 for zero-cost or low-cost, quality health insurance.

As a part the campaign, CMS is launching a series of testimonial advertisements that feature stories of individuals who have found real savings on HealthCare.gov. The testimonials feature:

These will run during prime-time television programming and digital platforms, with increased outreach directed to underserved and minority populations. CMS will also run the bilingual campaign to promote the SEP during the Olympics and other high-profile sporting events.

“Across the country, there’s a clear demand and need for coverage – and thanks to President Biden and the American Rescue Plan, it’s more affordable than ever on HealthCare.gov,” said HHS Secretary Xavier Becerra. “Health care is a right, not a privilege, and this renewed effort to reach as many Americans as possible in the next 30 days is critical to delivering health care and saving lives. Please tell your friends and family: if you lack health insurance, now is the time to go to HealthCare.gov, find a plan that works, and save money.”

During the campaign, CMS will release traditional advertisements, digital media resources, and educational materials directed towards populations with high uninsured rates, such as African Americans and young Latinos. In addition to advertising the SEP in multiple mediums, CMS is increasing community and partner outreach with Navigators, licensed agents and trusted messengers. Additionally, CMS has created a 30-day toolkit for partners to amplify the message of coverage options available during the SEP and the importance of signing up before the August 15 deadline.

“Now is the time for Americans to act. The peace of mind that comes with having health coverage for you and your family is priceless. With costs at an all-time low, this is an excellent opportunity for Americans to select a quality health care plan that works best for them.," said CMS Administrator Chiquita Brooks-LaSure. "This is an excellent opportunity to visit HealthCare.gov, update your information, or apply and enroll in a plan. The deadline on August 15, so check out HealthCare.gov today.”

The next part of the press release is also noteworthy, given that Congressional Democrats appear to be in the endgame for the big "American Families Plan" reconciliation bill over the next few weeks:

This particular paragraph is striking since it really doesn't have much to do with the marketing campaign announcement. It does, however, underscore which of the numerous healthcare reform proposals on the table last spring appear to be making the final cut:

The 2021 SEP offers new and existing consumers an opportunity to update or create a new application and newly enroll or change their current plan selection. During the next 30 days, consumers can apply on HealthCare.gov and select a new plan and take advantage of reduced premiums, increased savings, and quality, affordable health coverage. Since February 15, more than 2 million consumers have signed up for coverage on HealthCare.gov which includes an additional 600,000 enrolling in coverage through the 15 state-based Marketplaces during the SEP. Since the implementation of the American Rescue Plan (ARP) on April 1, 1.2 million new and returning consumers have newly found coverage for $10 or less per month after advance payments of premium tax credits.

Current Marketplace enrollees can review their application anytime, make any needed changes to their current information, submit their application, and reselect their current plan, to ensure they maximize their savings for the rest of 2021 Marketplace coverage. For those who are or have been unemployed, visiting the Marketplace is more important than ever. As of July 1, consumers who received or who are approved to receive unemployment compensation for any week in 2021, may be able to find even lower cost plans and save extra money on out-of-pocket expenses through HealthCare.gov.

They also made another important announcement here which is directly related to the ongoing Special Enrollment Period:

For many current enrollees who haven’t updated their application and enrollment with the new savings by early August, the Marketplace should automatically apply newly available savings to their enrollment to ensure as many consumers as possible receive the ARP enhanced benefits during the coverage year. This update will become effective on September 1, 2021. However, the information used for that automatic update will be based on information previously submitted by the consumer.

As of April there should've been something like 11 million people enrolled in ACA exchange plans prior to the American Rescue Plan's expanded subsidies going into effect. ALL of them will receive the additional financial help eventually, but until now, if you wanted to get the extra savings each month you had to manually log in and update your application manually. If you didn't, the presumption was that you'd receive the full amount for all 12 months of 2021 when you file your federal taxes next spring.

Instead, it looks like every existing enrollee will receive at least the last 4 months of extra savings automatically (September - December, assuming they stay enrolled all year). If they were enrolled from January on, they'll presumably get the other 8 months worth at tax time next year.

As for the final 30 days of the re-opened Enrollment Period, it'll be interesting to see how many more Americans CMS, HealthCare.Gov and the state-based exchanges are able to squeeze in during the final weeks.

On the one hand, thanks to the ARP's subsidy expansion, ACA exchange plans are now an excellent value for millions more people, and the addition of the Unemployment Benefit which effectively means a FREE Platinum-level healthcare plan for anyone who's been on unemployment at any point this year should help juice enrollment in the final days.

On the other hand, the ongoing economic recovery means a smaller pool of potential enrollees as more people go back to employer-based healthcare coverage (that's not a terrible thing!), and since your starting deductible and out-of-pocket maximums are the same regardless of which month your coverage begins, someone enrolling in August won't get as much out of their policy for the current year as someone signed up since January.

Here's how the SEP has gone for every month so far (note that this only includes HealthCare.Gov, not the ~600,000 who've enrolled via the other 15 state-based ACA exchanges). The first table is the gross Qualified Health Plan (QHP) selections; the second is the net enrollments after CMS removed those who never followed through by paying their first premium or who were never actually enrolled for other reasons: 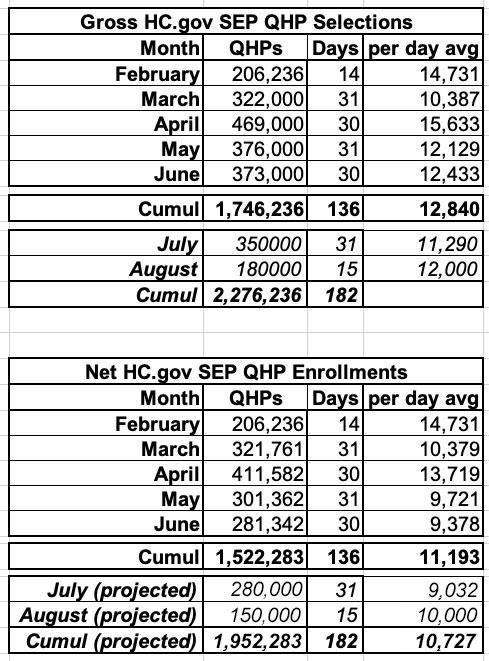 Based on the monthly averages and the trajectory, I'm gonna make a spitball projection that HC.gov will likely add perhaps 530,000 more QHPs gross, of which only perhaps 430,000 or so will actually be officially enrolled as active ACA exchange enrollees when the dust settles, for a final total of just shy of 2.0 million via HC.gov alone. If you figure another 100K sign up via the other 15 states, that would bring the grand total nationally to around 2.65 million, give or take.