Back on May 11th, I noted that total enrollment in healthcare policies either specifically created by (or expanded to more people by) the Affordable Care Act had likely broken 30 million Americans...an all-time high for the healthcare reform law signed by President Obama 11 years ago.

Last weekend, the Health & Human Services Dept. confirmed this, putting the actual total at around 31 million:

HHS's breakout was fairly close to mine, though they have enrollment a bit higher in some categories and a bit lower in others:

As I noted at the time, however, Medicaid expansion data in the HHS report only runs through last December, so it doesn't include any additional increases from January - June. Meanwhile, the "effectuated exchange enrollment" only runs through February...meaning it doesn't include any of those who've signed up during the re-opened Enrollment Period which started on 2/15 and is continuing through 8/15. Given the massive improvement in affordability thanks to the American Rescue Plan, that's an important omission.

Well, being the obsessive data nerd that I am, I couldn't leave well enough alone. I started a project awhile back to track Medicaid enrollment for every state, month by month, since ACA expansion went into effect back in 2014 but got off track...so I've restarted it this past week. I'm only about halfway through the individual state analyses, but I've cobbled together the most recent ACA expansion data I can find from the various state health dept. websites.

I want to give a shout-out here to my friend & colleague Andrew Sprung, who has also been doing a similar project parallel to mine since last fall. Some of my data (and many of my source links) were provided by him, and we've also collaborated a bit on analyzing some of the more confusing data.

I've also been (of course) tracking Special Enrollment Period enrollments since February...and in addition to the 940,000 additional enrollees confirmed by CMS via HealthCare.Gov (which was later bumped up to 1.0 million by President Biden in a speech a few days later), I've also confirmed at least 151,000 more SEP enrollees via the various state-based ACA exchanges.

NONE of these are included in that 31.0 million report from HHS.

All in all, I've confirmed that at least 1,090,631 more people have enrolled via the Special Enrollment Period nationally...and even then, most of that data only runs through the end of April. I strongly suspect that HealthCare.Gov SEP enrollment was over 1.2 million by the end of May (in fact, President Biden may have even let this slip in his Weekly Address video with President Obama over the weekend). On top of that, I suspect total SEP enrollment across the 15 state-based exchanges is more like 400,000, bringing the SEP total as of the end of May up to 1.6 million or so nationally.

Of course, there's a lot of churn in the individual market--just as people sign up, current enrollees drop out. As Sprung noted, net effectuated exchange enrollment dropped by around 468,000 people from February through May in 2019...or around 4.5%. Assuming a similar February - May drop this spring, that would put total effectuated enrollment at around 12.4 million...or roughly 1.1 million higher than the HHS report had it as of February.

In addition, I've confirmed that at least 700,000 more people have been added to the Medicaid rolls thanks to ACA expansion since December...and I estimate that the actual net increase is over 1.0 million higher as of May/June. And even that's before Oklahoma's Medicaid expansion initiative goes into effect (nearly 100,000 Sooners have already been approved; coverage starts in July).

The total U.S. population, according to the U.S. Census Bureau, currently stands at around 335 million people...which means a full 10% of the U.S. population is now enrolled in coverage under the Affordable Care Act.

There's also somewhere between 1.5 - 2.1 million Americans enrolled in OFF-exchange ACA-compliant individual market policies. These folks may not receive any subsidies (though many of them are eligible for for them now, thanks to the American Rescue Plan) and they may not have used an ACA exchange to sign up, but the policies they've chosen are still fully ACA-compliant, including the same protections for coverage of pre-existing conditions, the lack of annual or lifetime claims caps and so on.

I was actually a bit surprised the HHS report didn't make any mention of them, but off-exchange ACA enrollees have historically been overlooked by a lot of reports of this nature. In addition, if the ACA is struck down by the Supreme Court (the decision could come as early as tomorrow morning), unsubsidized enrollees would likely at least be able to keep their coverage through the end of 2021 in most states, since they can by definition afford to keep paying the full-price premiums through the end of the year. That's pretty weak tea, though...they'd lose all those federal protections at the end of the annual contract just like everyone else.

When you add these folks to the mix, it brings the grand total to somewhere between 34.7 - 35.3 million. I'm going to go with the low end of this range, however, mainly because a portion of the ~1.6 million SEP enrollees this spring likely consist of off-exchange enrollees simply switching to on-exchange coverage instead to take advantage of the expanded subsidies under the American Rescue Plan.

In other words, even if you knock a few hundred thousand off the low-end total just to err on the side of caution, that's a grand total of at least 34 million Americans enrolled in ACA-specific healthcare policies as of this writing.

UPDATE 6/14/21: CMS just published an updated report including Special Enrollment Period QHP selections through May 31st for HealthCare.Gov, and as I expected, it came in at just over 1.2 million. In fact, it's actually around 36,000 higher than I expected (1.24 million).

Again, assuming only 1.5 million off-exchange ACA enrollees, the grand total currently sits at around 34.7 million; if off-exchange enrollment is at the higher end (2.1 million) that brings it up to 35.3 million. 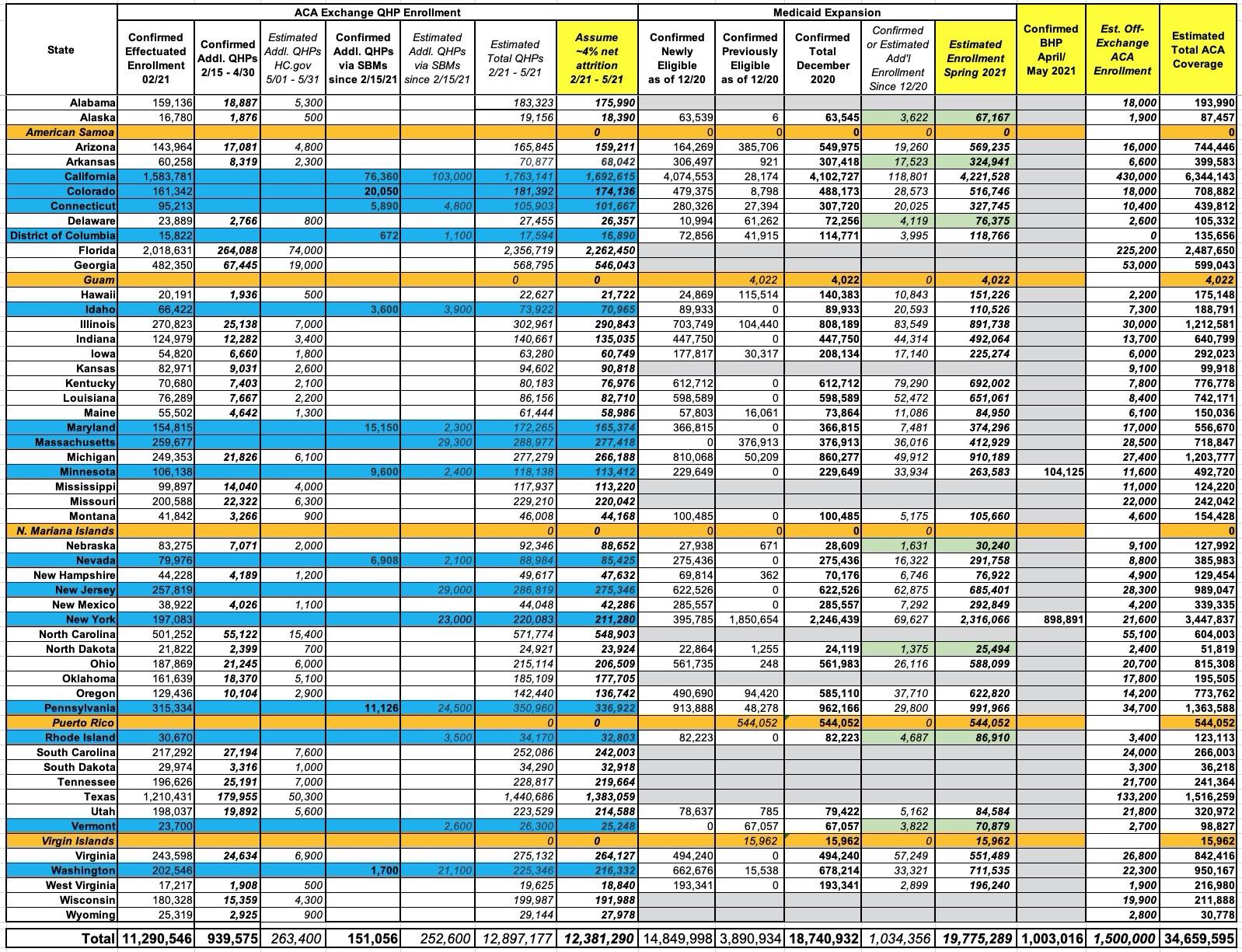